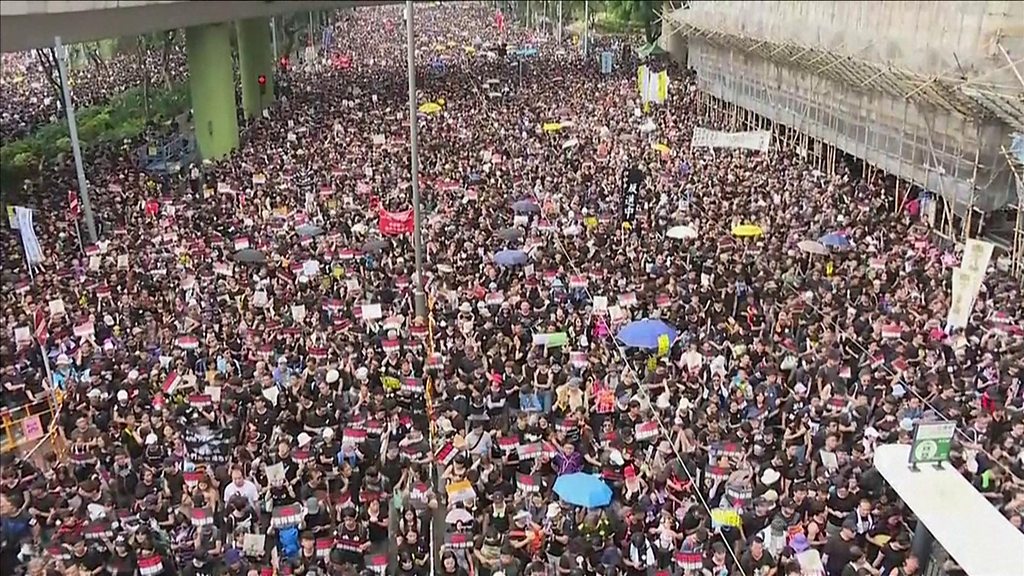 The number has not been independently verified. If confirmed, it would be the largest protest there since 1989.

The masses turned out despite the suspension of the bill – which would allow extradition from Hong Kong to mainland China – on Saturday.

Many protesters, who fear increased Chinese influence over Hong Kong, are calling on her to resign over the unrest.

They are also demanding that the bill be scrapped, not just suspended.

What happened at the protest?

The protest was mainly peaceful, with police officers reportedly holding back to allow the throngs of people to slowly pass through the city. This contrasted to scenes at the last previous major demonstration on Wednesday, which saw clashes between protesters and police that injured dozens.

The demonstration began early in the afternoon in Victoria Square, with many wearing black.

Many held white flowers to mourn a protester who fell to his death on Saturday from a ledge, where hours earlier he had unfurled an anti-extradition banner.

The progress of the march was slow, as the large numbers of people blocked many streets and crowded train stations.

Ms Ng and Mr Chu have joined the protests at Victoria Park – say it's the first time protesting against the extradition proposals. Say they were angered by police use of force. Wearing white flowers to commemorate yesterday's protester who fell to his death. pic.twitter.com/BgJ2Nn3PJz

As darkness fell, protesters started to take over major roads and crossings and surrounded the legislative council building.

They carried placards that read “The students did not riot”, in response to police labelling last Wednesday’s student protests a riot – an offence punishable by up to 10 years in jail.

There was scepticism among some protesters about Ms Lam’s decision to suspend the bill.

“Carrie Lam has ignored the feelings of Hong Kongers,” Mr Ma, a 67-year-old protester, told the BBC. He said Ms Lam had “acted like it was no big deal” after a reported million people marched last week.

“Secondly, we are marching for the students who were brutally treated by the police. We need to get justice for them.”

Chloe Yim, 20, who had joined the protests for the first time, said: “If Carrie sees so many people come out, and still doesn’t listen – she’s being an autocrat who doesn’t listen to people. Hong Kong people can’t accept that.”

‘Too little too late’

The government had hoped to reduce public anger by announcing a pause in the legislation on Saturday.

That has patently failed, as even bigger numbers – close to two million, according to the organisers, took to the streets.

For the chief executive, the demonstrations will have taken on a particularly personal bent, as protesters chanted “Carrie Lam – resign!” throughout during the day.

The government is now trying to strike a conciliatory tone – in a statement, it said it understood the protesters’ views “have been made out of love and core for Hong Kong”. It promised the chief executive would adopt a more “sincere and humble attitude” towards public criticism.

But this is too little, too late for many protesters, who insist they won’t settle for anything less than the bill being completely withdrawn.

The scenes are reminiscent of 2003 – when half a million people protested against proposed national security legislation. The unpopular chief executive at the time, Tung Chee-hwa, resigned months later.

But even if Ms Lam resigns, there’s no guarantee that protesters will be satisfied with whoever replaces her – especially as, under Hong Kong’s political system, the leader is elected by a small panel filled with allies of the Beijing government.

What is the controversy about?

Hong Kong is a former British colony, but was returned to Chinese rule in 1997 under a “one country, two systems” deal that guarantees it a level of autonomy.

The government had argued the proposed extradition bill would “plug the loopholes” so that the city would not be a safe haven for criminals, following a murder case in Taiwan.

Critics have said the legislation would expose people in Hong Kong to China’s deeply flawed justice system and lead to further erosion of the city’s judicial independence.

Many fear the law could be used to target political opponents of the Chinese state. A large-scale march, which organisers said drew more than one million people, was held last Sunday.

On Wednesday tens of thousands gathered to blockade streets around government headquarters to try to stop the second reading, or debate, of the extradition bill.

There were clashes and 22 police and 60 protesters were injured. Authorities say 11 people were arrested. The police have been accused by some rights groups of excessive force.

Why the anger at Carrie Lam?

Much of the public anger has been directed at Ms Lam, the region’s elected chief executive – who is firmly supported by Beijing.

Part of that anger comes from a tearful address after Wednesday’s violence in which she labelled the protests “organised riots” – a label rejected by the hundreds of thousands of peaceful protesters.

Ms Lam remained hidden from public view for days, until her announcement on Saturday the she had heard the calls for her government to “pause and think”. But she stopped short of saying the bill would be permanently shelved.

On Sunday, she followed this up with a statement apologising for “her government’s work that has led to substantial controversies and disputes in society, causing disappointment and grief among the people”.

There has been speculation among analysts about Ms Lam’s future amid the continued protests, but China’s foreign ministry publicly backed her on Saturday.

Is Hong Kong part of China?

Hong Kong was a British colony from 1841, when China ceded the island to the British after the First Opium War – which had erupted over British traders smuggling opium into China. It remained a colony until sovereignty was returned to China in 1997.

It is now part of China under a “one country, two systems” principle, which ensures that it keeps its own judicial independence, its own legislature and economic system.

It is what China calls a special administrative region – enjoying a great deal of autonomy that has made it a key business and media hub in the region.

But it remains subject to pressure from mainland China, and Beijing remains responsible for defence and foreign affairs.

Are you taking part in the protests today? If it is safe to do so please get in touch by emailing haveyoursay@bbc.co.uk.

You can also contact us in the following ways: