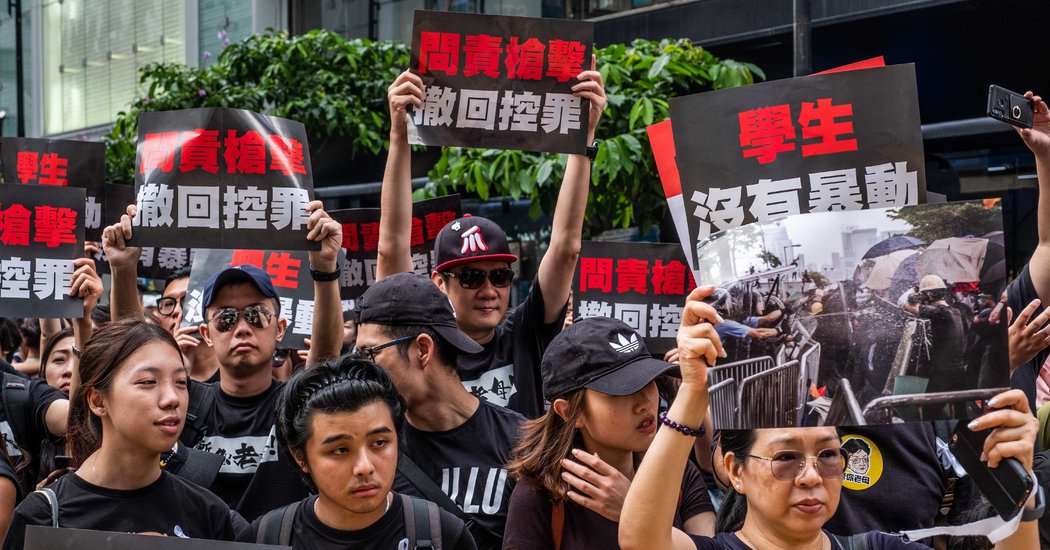 Hong Kong’s chief executive apologized to the public on Sunday after a surprisingly large and defiant crowd poured onto the streets and converged on government offices. The protest capped a week of heated protests and soul-searching questions about the city’s ability to maintain some semblance of autonomy from mainland China.

Many opponents of an unpopular bill, slated to allow extraditions to mainland China, focused their anger on the territory’s chief executive, Carrie Lam, who insisted on pushing through the legislation despite a public outcry that grew into a series of massive protests. On Saturday, Mrs. Lam backed down and indefinitely suspended the bill but refused to apologize.

That was not enough for many protesters who filled the streets of Hong Kong on Sunday and surrounded the Legislative Council. Organizers said nearly two million people joined the rally, while the police estimated that 338,000 protesters turned up at the peak of the demonstration along a previously agreed-upon procession route, implying that its count did not include people who spilled over on to adjacent and parallel roads.

Six hours after the protest started, the government said in a statement that Mrs. Lam admitted that inadequacies in the government’s work had disappointed and saddened the public.

“The Chief Executive apologizes to Hong Kong citizens for this, and promises that she will take on criticisms in the most sincere and humble way, striving to improve and serve the general public,” the statement said.

The statement struck a more conciliatory tone than Mrs. Lam’s previous remarks made at a news conference on Saturday, but it was unclear whether the apology, delivered in a written statement, would be enough to pacify the protesters.

As word of Mrs. Lam’s statement spread among the protesters, many said they were disappointed and called her words insincere, noting that Mrs. Lam did not say she would fully withdraw the bill as demonstrators have demanded.

“She doesn’t have the guts to face the public,” said Bobo Tang, a 22-year-old student. “She’s just trying to separate herself from the issue.”

Leo Cheng, 19, said Mrs. Lam’s remarks did not seem genuine. “She only did it under pressure,” he said.

Emily Lau, a former chairwoman of the Democratic Party and still a leading figure in the territory’s democracy movement, said that she was not aware of Carrie Lam’s having apologized for anything before.

“It’s the first time, but it is too little too late,” she said.

Mrs. Lam’s apology came on the heels of the third major protest to rock the city in a week. Protesters packed the sweltering summer streets of Hong Kong on Sunday, sending a clear message to Mrs. Lam and China’s central government: We are still angry.

As night fell, thousands of younger protesters filled the streets around government offices and the Legislative Council complex, the site last week of a violent clash with the police.

Many of the protesters occupied the roads near the legislature and even the council’s grounds, in a scene reminiscent of the 2014 pro-democracy Umbrella Movement protests that paralyzed the city for weeks.

[The protests in pictures.]

“Carrie Lam, step down!” the protesters chanted, referring to the city’s chief executive whose proposed bill to allow residents to be extradited to mainland China for trial has been met with the largest protests seen in the semiautonomous territory in years.

The crowd remained peaceful but the mood was palpably tense.

Earlier in the day, a sea of people, uniformly dressed in black, stretched for more than a mile through the center of the city. In places, the streets were so congested people were forced to inch along instead of marching. The subways were packed, leading to several stations on one route being shut down.

“I want to give feedback that the Hong Kong people don’t trust the Chinese government,” said Kenneth Wong, 23, a window display designer who held a sign calling for the extradition bill to be withdrawn.

“Hong Kong people, we stand together,” he said. “We all have the same message. We don’t want this bill. We want Carrie Lam to step down.”

The demonstrators chanted new demands on Sunday, highlighting a shift in anger over the extradition bill to how the government has responded: “Withdraw the bill!” “We are not rioters!” “Release the arrested students!”

Among other things, demonstrators condemned the police for using tear gas, rubber bullets and pepper spray to disperse protesters on Wednesday.

They also demanded that arrested demonstrators be released and called on the government to cease referring to the protests as “riots,” which could have serious legal ramifications for those who have been detained.

Many people on Sunday carried photos of bloodied demonstrators or images of the police deploying pepper spray and signs that read “Don’t kill us.”

Anthony Tam, a 40-year-old engineer marched with his wife and two daughters, a 6-year-old and a 9-year-old, because he was angered by the police’s use of force against protesters on Wednesday.

“Even if the police calls it rioting, they used a minority group’s behavior as justification to use force against a crowd of largely peaceful protesters. It’s repulsive,” Mr. Tam said, adding that he had been raised to be apolitical and that this was his first protest. “I am a Hong Konger, born and raised, and it has become a place I do not recognize anymore.”

Pan Chow, a 30-year-old office worker, said many people in Hong Kong had been shocked when riot police used tear gas on protesters back in 2014. “But the police was very prepared to use much more intense methods to clear protests this time,” he said. “I cannot accept that this is becoming the standard and expected response.”

The police have arrested 11 people in relation to the protests in the past week, but have not said whether they would open an investigation into the use of force by their officers.

Protesters held a vigil where a protester died.

They came bearing white lilies, sticks of incense and offerings of whiskey and beer. They cried, they knelt and they said prayers. They vowed to continue to fight.

Tens of thousands of Hong Kong residents paid tribute on Sunday to a man most did not know, a 35-year-old protester who fell to his death outside an upscale mall late Saturday after unfurling a banner that denounced the extradition bill. The police characterized his death as a suicide.

The man was a mystery to many, an ordinary protester who was identified by the police only by his surname, Leung. But this much, the protesters knew: He wore a yellow raincoat.

The raincoat, and the harsh criticisms of the government inscribed on its back, became a motif in the demonstrations on Sunday.

Mr. Leung had been perched for hours on Saturday on the roof of a mall near the Hong Kong government complex. Shortly after 9 p.m., he climbed onto scaffolding on the side of the building, the authorities said. But as firefighters tried to rescue him, he fell, according to the police, landing next to an inflatable air cushion that had been set up to catch him. He was pronounced dead at a nearby hospital.

Many protesters carried flowers to mourn Mr. Leung, whom they referred to as a “warrior,” “hero” and “martyr.” They chanted his slogans, calling the police “coldblooded” and saying that Hong Kong’s chief executive, Carrie Lam, was “killing” the city. Some wore yellow raincoats in his honor.

At night, protesters held a vigil for the man, holding candles and waving mobile phone flashlights. Perry Chan, an artist, stood with an easel painting an image of the crowd. In one corner of the painting was the now widely-shared image of the man in the yellow raincoat.

Emily Liu, a banker originally from mainland China, took her five-year-old son to the memorial because she wanted to show him what was at stake in the battle over the extradition bill, she said.

“If we don’t persist in speaking out today,” Ms. Liu said, “then tomorrow we will not have the opportunity to take to the streets or to speak out again.”

Who’s leading the protests? Everyone and no one.

Who’s the next Joshua Wong? There may not be one.

Many have compared this week’s demonstrations and civil disobedience to the Umbrella Movement of 2014, when protesters led by Mr. Wong, who was then a teenager, occupied major commercial districts for almost three months to demand a greater voice in Hong Kong’s affairs.

But this time, the protesters do not appear to have a clear leader.

Demonstrations by an overwhelmingly young crowd on Wednesday were organized largely through social media, word of mouth and secure messaging apps like Telegram. As of Sunday morning, no single organizer had emerged as the students’ leader.

That may be because Mr. Wong and other leaders of the Umbrella Movement were jailed for their roles in the 2014 demonstrations. (Mr. Wong’s political party, Demosisto, said Mr. Wong would be released on Monday morning after completing his term.)

“Who’s going to be quite so willing, openly, to take six years of jail as the prize for the protests?” said Claudia Mo, a pro-democracy Hong Kong lawmaker.

Andrew Junker, a sociologist at the Chinese University of Hong Kong who has studied the Umbrella Movement, said one challenge for protesters without a leader is knowing when to declare victory.

“It’s the weakness of being so decentralized and leaderless and egalitarian and spontaneous,” he said.

Students have drawn other lessons from the 2014 demonstrations, making them much better prepared this time, said Leung Yiu-Ting, student union president at Hong Kong Education University. Factions that differed over strategy in the past have stopped attacking each other and learned to cooperate, he said.

“We are all finding our own ways to resist the government,” Mr. Leung said. “All our lives are at stake, so this is a sign that the Hong Kong people can stand together to fight something that is not right.”

Extradition bill at center of protests is suspended, but not withdrawn.

In a remarkable reversal, Mrs. Lam said on Saturday that she would indefinitely suspend the bill.

Ms. Lam, who took over as Hong Kong’s leader in 2017 with the support of Beijing, had vowed to ensure the bill’s approval and tried to get it passed on an unusually short timetable, even as hundreds of thousands demonstrated against it last week.

[Carrie Lam is known for almost never backing down in a fight.]

As pressure mounted, even some pro-Beijing lawmakers said the measure should be delayed. While the suspension is a victory for Hong Kong protesters, Ms. Lam made it clear on Saturday that the bill was being delayed, not withdrawn outright. City leaders hope that delaying the legislation will cool public anger, but leading opposition figures and protesters say that is wishful thinking.

The Chinese foreign ministry and members of the Hong Kong administration aligned with Beijing have repeatedly said the protests are part of a “foreign influence” campaign, pointing to recent statements made by Western leaders in support of the demonstrators, as well as earlier meetings between Hong Kong democracy advocates and American politicians.

At least 40 people joined a small counterprotest outside the United States Consulate on Sunday, echoing the Communist Party line that the anti-extradition protests in Hong Kong had been engineered by foreign governments hostile to China.

Stanley Ng, chairman of the Hong Kong Federation of Trade Unions and one of the counterprotesters outside the United States Consulate on Sunday, described the anti-extradition protesters as “rioters.”

“We, as parents, are very worried that our children will continue to be dragged into the team of rioters to take part in the riots,” he said.