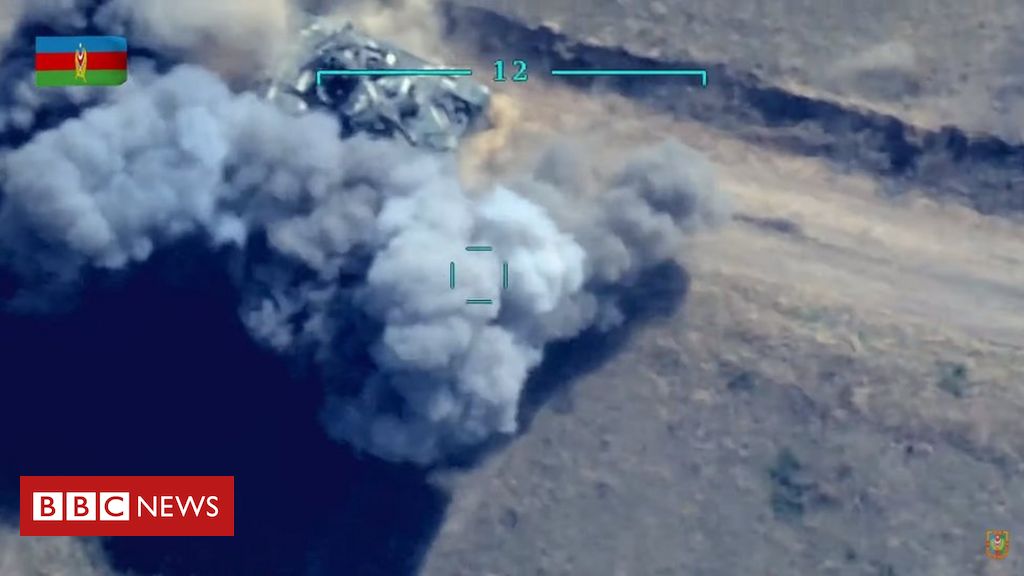 Azerbaijan’s president has vowed to fight on until Armenian forces leave disputed territory, on the fourth day of fierce fighting in the region.

“We only have one condition: Armenian armed forces must unconditionally, fully, and immediately leave our lands,” President Ilham Aliyev said.

More than 100 deaths have been reported in the heaviest fighting in years over the Nagorno-Karabakh region.

Officially part of Azerbaijan, it is governed by ethnic Armenians.

The two former Soviet republics fought a war in 1988-1994 over the territory. Although Armenia backs the self-declared republic it has never officially recognised it.

It is unclear what caused the renewed fighting, which is the heaviest since the 1994 ceasefire, and there are growing fears international powers could be dragged into the conflict.

On Wednesday French President Emmanuel Macron said he was “extremely concerned by the warlike messages” coming from Turkey, a staunch ally of Azerbaijan.

Turkey says it is “fully ready” to help Azerbaijan recover the enclave.

Meanwhile, Armenia’s defence ministry released a picture of an Armenian SU-25 jet it said had been shot down by a Turkish F-16 on Tuesday. Turkey has rejected the allegation as “cheap propaganda” and Azerbaijan says Armenia is lying about the cause.

What’s happening on the ground?

Dozens of soldiers and some civilians have died since fighting broke out on Sunday.

Both sides accused the other of shelling across the so-called Line of Control, separating forces in Nagorno-Karabakh.

On Wednesday, Azerbaijan published footage of what it said was the destruction of two “enemy” tanks and said an Armenian battalion had fled the area around Tonashen.

Armenian reports said three civilians had been killed in an Azerbaijani air attack on the town of Martakert in Nagorno-Karabakh. Armenian state news agency Armenpress said seven civilians and 80 service personnel had been killed since the fighting began.

Azerbaijan’s prosecutor general announced on Wednesday that 14 civilians had been killed and 46 injured.

On Wednesday French President Macron warned Turkey about “warlike comments… which essentially remove any inhibitions from Azerbaijan in what would be a reconquest of Nagorno-Karabakh. That we will not accept.”

Turkey is an ally of Azerbaijan, and even closed its border with Armenia in 1993 in solidarity over the Nagorno-Karabakh dispute.

France meanwhile has a large expatriate Armenian population. Mr Macron appeared to promise greater support to Armenia in the coming days: “I say to Armenia and to the Armenians, France will play its role.”

The country is also a chair of the Organization for Security and Co-operation in Europe (OSCE) Minsk Group, created in 1992 to resolve the conflict between Armenia and Azerbaijan.

In recent weeks Nato allies France and Turkey have been on opposite sides in a dispute over energy claims in the Eastern Mediterranean. They have also been at odds over the power struggle in Libya.

Turkey has said it will do “what is necessary” to back Azerbaijan, and Foreign Minister Mevlut Cavusoglu accused the French president of, in effect, supporting occupation.

But there has been international concern that Turkey may back a bigger military operation. Mr Cavusoglu has already said Turkey will support Azerbaijan “both on the field and at the negotiation table” and a presidential aide has spoken of Turkey’s commitment “to helping Azerbaijan take back its occupied lands”.

Mr Macron said he would speak to Russian President Vladimir Putin later on Wednesday about the conflict.

Russia is part of a military alliance with Armenia, and has a military base in the country. However, it is also close to Azerbaijan’s rulers, and has called for an immediate ceasefire, offering to mediate in the conflict.

On Wednesday, Armenian Prime Minister Nikol Pashinyan said he had not yet discussed Russia’s possible involvement in the conflict, given their alliance. “Armenia’s armed forces are capable of defending the country’s security,” he told reporters.