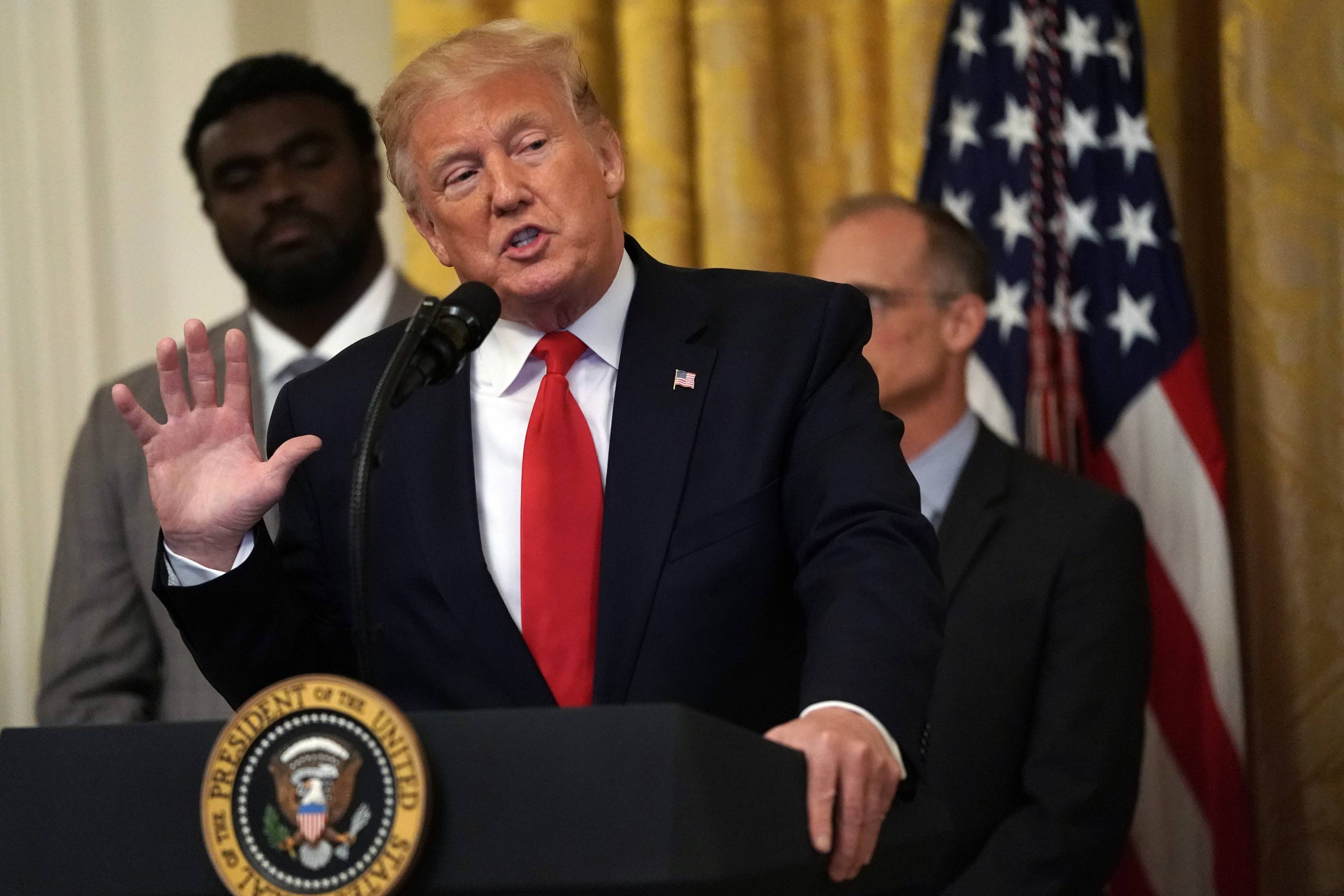 When Donald Trump bought 436 acres in upstate New York two decades ago, he envisioned adding two new championship golf courses to his collection.He bought the wet, overgrown, tree-tangled parcels that sit miles off a state parkway beginning in 1998 for less than the current price of a two-bedroom condo in Trump Tower.

But local leaders nixed the golf-course plans and his subsequent efforts to sell it to a homebuilding company faltered. So he gave it away.

“This is my way of trying to give back,” he said at the time.

Like most deals involving Trump, there was more to it than goodwill. He was unloading what experts say was useless land, but not before working local officials to see if they could reappraise it at more than five times the assessed value, according to documents seen by Bloomberg and interviews with people involved — and using a grossly inflated figure on later presidential campaign documents to show, falsely, the depth of his philanthropy.

Despite the purchase price of $2.75 million, and a county assessment of $5.5 million at the time of the donation, Trump’s 2016 campaign said in a list of charitable donations published by The Washington Post that the land was worth $26.1 million.

It’s impossible to tell if Trump did anything improper, since he has never released his tax returns. And there’s no law against inflating the value of property on campaign press releases. But the law does require taxpayers to accurately report the value of all charitable donations for deduction purposes and Trump could face a penalty or fine from the IRS if he exaggerated the value of the land on his tax returns. The IRS routinely audits all modern U.S presidents and vice presidents annually, including Trump.

The donation took shape around the same time that Trump was struggling, ultimately in vain, to turn around his three struggling casinos in Atlantic City, New Jersey. In March 2006, one month before his gift was announced, his casino empire — Trump Entertainment Resorts — lost $22.1 million in its fourth quarter.

An hour’s drive north of Manhattan, Donald J. Trump State Park is what New York euphemistically calls a “passive park,” meaning it has no trails, picnic tables or other amenities. The state stopped maintaining it in 2010, and the land lies covered in brambles, mud and rocks. A bill pending before the state legislature would change the name of the park to honor the folk singer Pete Seeger instead of the current president.

Trump bought the first parcel, 282 acres known as Indian Hill that straddle Westchester and Putnam counties, from an estate sale for $1.75 million in 1998. He also bought 154 acres in Westchester County known as French Hill, also part of an estate sale, for $750,000. In 2000, he bought 58 acres of a nearby “surplus” stretch of the Taconic State Parkway from the New York State Department of Transportation for $250,000.

But by 2002, local authorities had rejected his plans for two 18-hole championship golf courses on Indian Hill and French Hill on the grounds that the courses would drain the area’s water supply as well as affect the water supply of New York City downstream.

So in 2003, Trump tried to sell U.S. Home Corp. an option to build houses on the tracts. But the giant home-builder got cold feet about the costs of environmental and engineering challenges, according to a person familiar with the deal. The option agreement was terminated in April 2005, according to a memorandum filed in Putnam County.

Aaron Curtiss, a spokesman for Lennar Corp., which bought U.S. Home Corp. in 2000, declined to comment on the company’s dealing with Trump.

Tim Miller, an environmental consultant who worked on the plans, said Trump made no improvements to the land, so the value likely stayed the same. “What he paid was its value, that’s what I would expect,” he said.

Miller added that he billed the Trump Organization a seven-figure sum for his work on the land as well as his work on Trump National Golf Club Westchester in Briarcliff Manor, New York. Trump’s company paid him all but $140,000, and after fighting for several months to get the balance, Miller said he finally accepted Trump’s personal offer of a discounted membership at the Briarcliff Manor club in lieu of payment.

“It was either accept it or go to court,” Miller said.

The Trump Organization didn’t respond to emails and phone calls seeking comments about any aspect of the park deal.

Once Trump decided to donate the lands, his aides worked hard to maximize their value. Apparently, Trump wanted a bigger write-off than what the county said the land was worth.

Henry DeCotis, then the assistant state attorney general, said Trump fixer Michael Cohen called him in 2005 to inquire about donating lands to the state. DeCotis said the official fair market value of $5.5 million “might be in the ballpark.”

A spokeswoman for Cohen’s lawyer Lanny Davis declined to comment, and declined to arrange an interview with Cohen, who is serving time in Otisville prison in New York for lying to Congress about Trump’s business and campaign dealings.

By early 2006, Hal Goldman, who until 2011 was a Trump Organization vice president for development, said that he was in talks with the New York state Department of Parks, Recreation and Historic Preservation about donating the land — and branding it Trump.

Trump’s donation nevertheless was finalized and in April 2006, Republican Governor George Pataki held a ceremony at the park to announce the gift and naming, with Trump saying in an official statement issued by the governor’s office that “this is my way of trying to give back” and that he hoped the lands “will turn into one of the most beautiful parks anywhere in the world.”

The Internal Revenue Service requires filers claiming a charitable deduction worth more than $5,000 to attach to their returns a “qualified appraisal” of the contribution.

Goldman said he was “unaware” of Trump having conducted any independent appraisal of the parcels of land.

“Let me put it this way,” Goldman said. “Would you go out and get an appraisal, or would you declare what you wanted it to be worth” and then have someone justify it. “I think that’s your answer,” he said.

Michael Grace, a former town attorney for Yorktown, New York, where some of the land sits, said the tracts might not have been worth even the $2.75 million Trump paid for it.

The only way to know if Trump actually claimed a deduction of $26.1 million would be if congressional committees get his federal tax returns they have subpoenaed from the Treasury Department.

Bernadette Castro, the former Parks commissioner who oversaw the donation and attended the ceremony, said through a spokesman, John Rice, that she “does not recall the exact appraisal process.” Castro appeared on Trump’s television show “The Apprentice” in 2005 and was “fired” by the future president.

Dan Keefe, a spokesman for the state Parks department, said the donation “happened a long time ago” and declined to state whether the agency had done its own appraisal. Former Putnam County clerk Dennis Sant referred Bloomberg to the documents involved in the sale and subsequent donation. White House spokesman Hogan Gidley declined repeated requests for comment.

Fred Koelsch, the director of realty investments at Camarda Realty Investments, said that if Trump took a $26.1 million deduction for the donation, “that’s an awfully large number.” Koelsch, who did some work for the Trump Organization while at his former law firm, Shamberg Marwell Hollis Andreycak & Laidlaw PC, explained that because both Trump and U.S. Home had failed to develop the lands, they had neither increased in value nor held much extra value on top of their purchase price. “This is back-of-the-napkin math, but the deduction should have been low.”

Still, Koelsch said it’s very difficult to put value on undeveloped land. As such, said, “we have the seller tell us what they think it’s worth.”

—Democrats hold out on USMCA as Trump walks back Mexico tariffs

—The story behind the Baby Trump balloon

Get up to speed on your morning commute with Fortune’s CEO Daily newsletter.