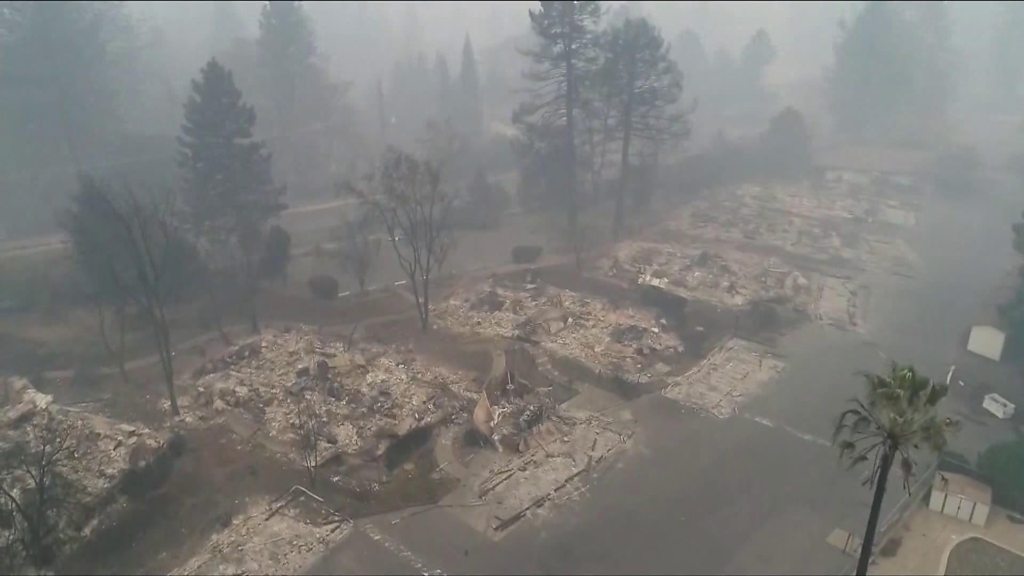 The number of people missing in northern California’s devastating wildfire has leapt to more than 600, and seven more bodies have been found, according to local authorities.

The missing persons’ list has doubled since earlier on Thursday.

The Camp Fire, the state’s deadliest and most destructive blaze, has killed at least 63 people. Nearly 12,000 buildings have been destroyed.

President Donald Trump will travel to California on Saturday to survey the damage and meet those affected.

About 9,400 firefighters are currently battling wildfires across the state.

The Camp Fire – which broke out eight days ago – swept through a swathe of the north at high speed, leaving residents little time to escape.

Why such a big jump in the missing?

The official list more than doubled from 300 to 631 on Thursday.

At a news briefing, Butte County Sheriff Kory Honea said this was because investigators had thoroughly cross-checked their information, including emergency calls made since the Camp Fire started on 8 November.

“I want you to understand that the chaos we were dealing with was extraordinary,” Mr Honea said.

He stressed that the number of the missing would most likely fluctuate.

“If you look at that list and see your name, or the name of a friend or loved one, please call to let us know,” Mr Honea appealed to the public.

What’s the latest on the firefighting operation?

The California Fire Department says it has now contained about 40% of the Camp Fire blaze.

“We continue to engage in the fire fight. We continue to keep our eye on the ball,” chief fire department official Ken Pimlott said.

They are also battling several other fires. The Woolsey Fire in Ventura County near Los Angeles covers nearly 100,000 acres and is 62% contained.

The worst-hit area is the town of Paradise, with officials saying it will need a “total rebuild” job that will take several years.

Brock Long, administrator of Federal Emergency Management Agency (Fema), said the damage to Paradise was “one of the worst disasters” he had ever seen.

Military troops are assisting forensics teams and cadaver dogs as they continue to search for human remains.

Officials have warned the search operation could take weeks.

Why are the fires burning?

Officials have not yet confirmed what started any of the blazes, as investigations are continuing.

Several people have already filed a lawsuit against a local power company, alleging that the Camp Fire started when a high-voltage transmission line failed.

Historically, California’s “wildfire season” started in summer and ran into early autumn – but experts have warned that the risk is now year-round.