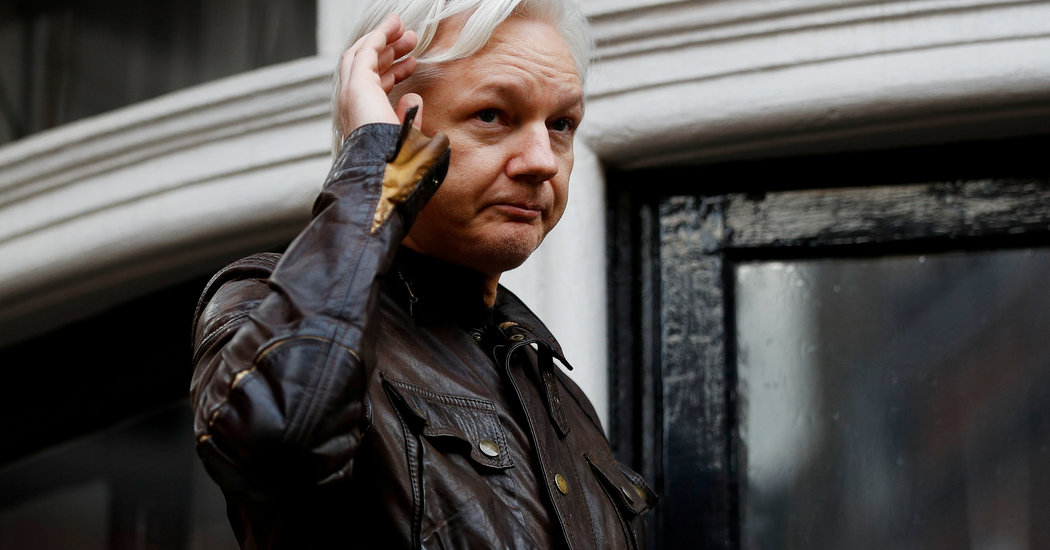 WASHINGTON — The Justice Department has secretly filed criminal charges against the WikiLeaks founder, Julian Assange, a person familiar with the case said, marking a drastic escalation of the government’s yearslong battle with him and his anti-secrecy group.

Top Justice Department officials told prosecutors over the summer that they could start drafting a complaint against Mr. Assange, current and former law enforcement officials said. The charges came to light late Thursday through an unrelated court filing in which prosecutors inadvertently mentioned them.

“The court filing was made in error,” said Joshua Stueve, a spokesman for the United States attorney’s office for the Eastern District of Virginia. “That was not the intended name for this filing.”

Mr. Assange has lived for years in the Ecuadorean Embassy in London and would have to be arrested and extradited if he were to face charges in federal court, altogether a multistep diplomatic and legal process.

The disclosure came as the special counsel, Robert S. Mueller III, is investigating links between President Trump’s associates and Russia’s 2016 election interference. WikiLeaks published thousands of emails that year from Democrats during the presidential race that were stolen by Russian intelligence officers. The hackings were a major part of Moscow’s campaign of disruption.

Though the legal move against Mr. Assange remained a mystery on Thursday, charges centering on the publication of information of public interest — even if it was obtained from Russian government hackers — would create a precedent with profound implications for press freedoms.

[Mr. Assange has been holed up in the Ecuadorean Embassy in London for years. Here’s how he got there.]

Mr. Assange has been in prosecutors’ sights for years because of WikiLeaks’s publication of thousands of secret government documents. Mr. Assange and his upstart website rose to prominence when Chelsea Manning, a low-ranking Army intelligence analyst, handed over thousands of classified Pentagon and State Department documents to WikiLeaks, which began publishing them in 2010.

“The news that criminal charges have apparently been filed against Mr. Assange is even more troubling than the haphazard manner in which that information has been revealed,” Mr. Pollack wrote in an email. “The government bringing criminal charges against someone for publishing truthful information is a dangerous path for a democracy to take.”

Seamus Hughes, a terrorism expert at George Washington University who closely tracks court cases, uncovered the filing and posted it on Twitter.

A Justice Department spokesman declined to say on Thursday what led to the inadvertent disclosure. It was made in a recently unsealed filing in an apparently unrelated sex-crimes case charging a man named Seitu Sulayman Kokayi with coercing and enticing an underage person to engage in unlawful sexual activity. Mr. Kokayi was charged in early August, and on Aug. 22, prosecutors filed a three-page document laying out boilerplate arguments for why his case at that time needed to remain sealed.

While the filing started out referencing Mr. Kokayi, federal prosecutors abruptly switched on its second page to discussing the fact that someone named “Assange” had been secretly indicted, and went on to make clear that this person was the subject of significant publicity, lived abroad and would need to be extradited — suggesting that prosecutors had inadvertently pasted text from a similar court filing into the wrong document and then filed it.

“Another procedure short of sealing will not adequately protect the needs of law enforcement at this time because, due to the sophistication of the defendant and the publicity surrounding the case, no other procedure is likely to keep confidential the fact that Assange has been charged,” prosecutors wrote.

They added, “The complaint, supporting affidavit, and arrest warrant, as well as this motion and the proposed order, would need to remain sealed until Assange is arrested in connection with the charges in the criminal complaint and can therefore no longer evade or avoid arrest and extradition in this matter.”

The Justice Department has been studying how to charge Mr. Assange or WikiLeaks with some kind of criminal offense since the site began publishing its trove of secret military and diplomatic documents. Prosecutors, for example, toyed with the idea of charging Mr. Assange as a conspirator in Ms. Manning’s crime of unauthorized disclosure of secrets related to national defense. And it eventually became public that a grand jury in the Eastern District of Virginia was investigating people with links to WikiLeaks.

But even as the Obama administration brought criminal charges in an unprecedented number of leak-related cases, it apparently held back from charging Mr. Assange. Members of the Obama legal policy team from that era have said that they did not want to establish a precedent that could chill investigative reporting about national security matters by treating it as a crime.

Their dilemma came down to a question they found no clear answer to: Is there any legal difference between what WikiLeaks was doing, at least in that era, from what traditional news media organizations, like The New York Times, do in soliciting and publishing information they obtain that the government wants to keep secret?

And such organizations, including The Times, have published many news articles based on documents that WikiLeaks published starting in 2010, including tranches of logs of significant combat events in the wars in Afghanistan and Iraq and diplomatic cables leaked by Ms. Manning, and the Democratic emails in the 2016 election that were hacked by Russia.

The debate over whether to charge Mr. Assange continued under the Trump administration and was being accelerated by former Attorney General Jeff Sessions, according to former government officials involved in the discussions, about whether Mr. Assange qualified as a journalist.

Charges against Mr. Assange raised the question of whether the Justice Department abandoned concerns about setting a precedent that would chill press freedoms after WikiLeaks’s role in Russia’s 2016 election interference and its publication that year of documents about C.I.A. hacking tools, or whether prosecutors decided that the new circumstances raised by the publication of the stolen emails opened a new legal avenue.

While prosecutors in the Manning era were focused on WikiLeaks’s publication of classified government documents — activity that they analyzed primarily through the lens of the Espionage Act — the Democratic emails were not government documents or national security secrets.

In July — a month before the erroneous court filing — Mr. Mueller charged 12 Russians with several crimes related to hacking and disseminating the emails as part of a foreign conspiracy to interfere in the election, which that indictment styled in part as a conspiracy to defraud the United States. Part of that indictment referred to WikiLeaks, which it identified as “Organization 1.”

“In order to expand their interference in the 2016 U.S. presidential election, the conspirators transferred many of the documents they stole from the D.N.C. and the chairman of the Clinton campaign to Organization 1,” the July indictment said, referring to the presidential campaign of Hillary Clinton. “The conspirators, posing as Guccifer 2.0, discussed the release of the stolen documents and the timing of those releases with Organization 1 to heighten their impact on the 2016 U.S. presidential election.”

Mr. Stueve’s explanation about the inadvertent filing left open the possibility that the language in the unrelated court document was lifted from a draft document written in preparation for eventual charges, not necessarily one handed up by a grand jury and sealed by a court.

Mr. Assange became something of a cult figure for those advocating greater transparency in government and in the corporate world. The prominence of WikiLeaks also generated a debate about the boundaries of journalism and the protections of free expression in the digital age.

At the same time, Mr. Assange was pursued by Swedish prosecutors on charges of sexual abuse — ultimately forcing him to seek refuge in the Ecuadorean Embassy in London in the summer of 2012. He has remained there since.

In October, Mr. Assange sued the Ecuadorean government for limiting his visitors and online activity.

WikiLeaks has been attacked for its publication of the hacked Democratic emails. In April 2017, the C.I.A. director at the time, Mike Pompeo, called it a “hostile intelligence service” that was aided by Russia and accused Mr. Assange of making “common cause with dictators.”

Mr. Hughes, the terrorism expert, who is the deputy director of the Program on Extremism at George Washington University, posted a screenshot of the court filing on Twitter shortly after The Wall Street Journal reported on Thursday that the Justice Department was preparing to prosecute Mr. Assange.