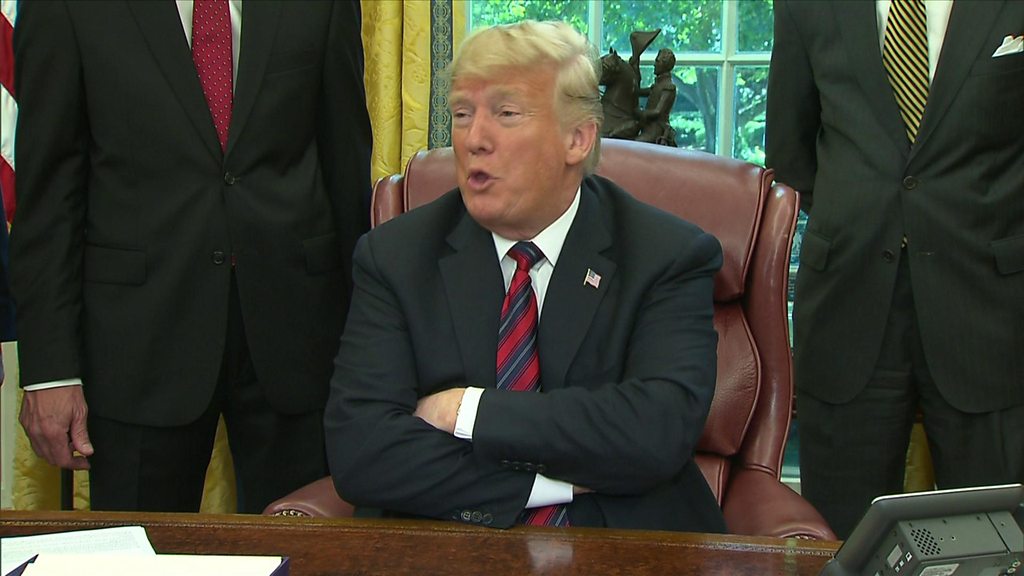 US President Donald Trump has called Saudi Arabia’s response to the murder of journalist Jamal Khashoggi “the worst cover-up ever”.

He added that whoever organised the plot “should be in big trouble”.

Secretary of State Mike Pompeo said, shortly afterwards, that the US “will punish those responsible” and is revoking visas of 21 identified suspects.

The US has faced pressure to toughen its stance on Saudi Arabia, a key ally.

Speaking to reporters at the White House, Mr Trump said: “They had a very bad original concept, it was carried out poorly and the cover up was the worst in the history of cover-ups.”

“Where it should have stopped is at the deal standpoint, when they thought about it,” he continued. “Because whoever thought of that idea, I think is in big trouble. And they should be in big trouble.”

The Saudi kingdom has provided conflicting accounts of what happened to Khashoggi, a US resident and Washington Post contributor. After weeks of maintaining he was still alive, the authorities now say the 59-year-old was killed in a rogue operation after visiting the Saudi consulate in Turkey.

In a news conference at the State Department in Washington, Mr Pompeo said that he and the president were “not happy with the situation”.

“We’re making very clear that the United States does not tolerate this ruthless action to silence Khashoggi, a journalist, through violence,” he said.

When asked whether the US would accept Saudi Crown Prince Mohammed bin Salman’s explanation of the incident, Mr Pompeo said: “We’re going to accept what America learns.”

“We have people working all across the world to put our own understanding together. We have to develop our own data set. We will learn the facts ourselves.”

Earlier on Tuesday, Turkish President Recep Tayyip Erdogan told MPs from his ruling party that the killing of journalist Jamal Khashoggi was planned days in advance.

He said Turkey had strong evidence Khashoggi was killed in a premeditated and “savage” murder at the consulate in Istanbul on 2 October.

He also called for the suspects to be tried in Istanbul.

Mr Erdogan’s address coincided with the start of an investment conference in Saudi Arabia that has been overshadowed by the Khashoggi case. Dozens of government and business leaders have pulled out, but Crown Prince Mohammed bin Salman appeared at the event on Tuesday.

Many world leaders have condemned the murder of the prominent Saudi critic and demanded a full investigation.

While Mr Trump has ramped up his criticisms of Saudi officials, he has also highlighted the kingdom’s importance as a US ally. CIA director Gina Haspel has been sent to Turkey to review the matter.

Where do the Saudis stand?

King Salman chaired a cabinet meeting on Tuesday, after which a statement said that Saudi Arabia would hold to account those responsible for the killing, whoever they might be.

State media also said the king and the crown prince had held a meeting in Riyadh with members of the Khashoggi family, including Khashoggi’s son, Salah bin Jamal.

Saudi Arabia has given conflicting accounts up to now, initially saying Khashoggi had left the building alive, then later saying that he had been killed in a “fist-fight” inside the consulate.

On Sunday, the Saudi foreign minister acknowledged Khashoggi had been murdered but said the leadership had not been aware of the “rogue operation”.

“The individuals who did this did this outside the scope of their authority,” Foreign Minister Adel al-Jubeir told Fox News. “There obviously was a tremendous mistake made, and what compounded the mistake was the attempt to try to cover up.”

He said that Saudi Arabia did not know where the body was.

An unnamed Saudi official told Reuters news agency on Sunday that Khashoggi had died in a chokehold after resisting attempts to return him to Saudi Arabia. His body was then rolled in a rug and given to a local “co-operator” to dispose of.

In addition to the arrests, the Saudis say they have sacked two of the crown prince’s aides and set up an organisation, under his leadership, to reform the intelligence agency over the killing.

According to Reuters news agency, quoting Turkish and Arabic intelligence sources, one of the sacked aides appeared via Skype during Khashoggi’s questioning. Saud al-Qahtani was quoted as giving the instructions “bring me the head of the dog”, after the two men traded insults.

The sources say President Erdogan has a copy of the Skype audio but is refusing to hand it over to the US.