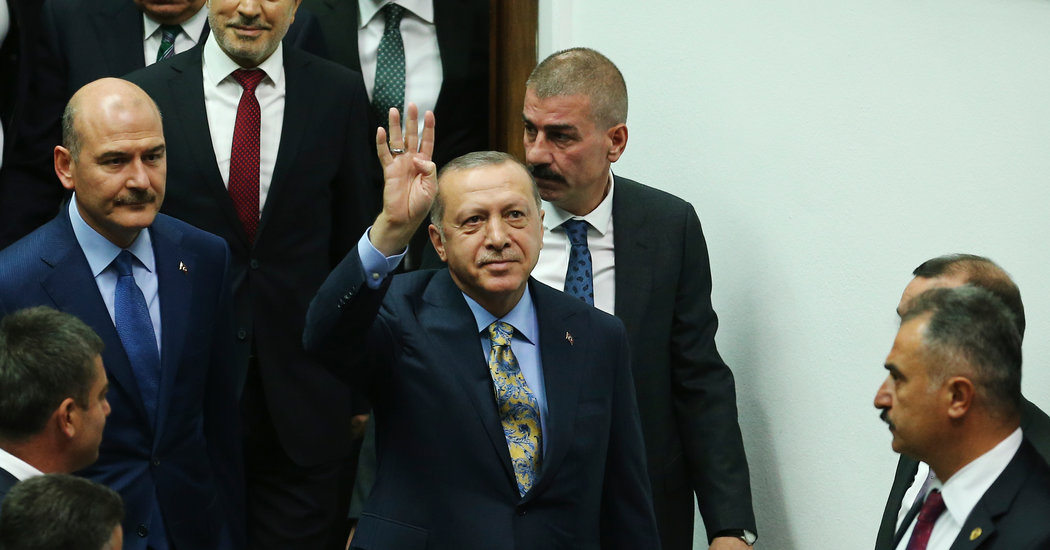 ISTANBUL — President Recep Tayyip Erdogan of Turkey on Tuesday raised the stakes in his dispute with Saudi Arabia over what he called the “premeditated murder” of the Saudi journalist Jamal Khashoggi, demanding that Riyadh supply more answers and hand over the Saudi suspects.

After saying he would reveal “the naked truth” about Mr. Khashoggi’s death, Mr. Erdogan, making his first extended remarks on the case, sketched out the chronology of a broad operation.

The 15-member team of Saudi officials arrived in stages in Istanbul to carry out the killing, and included generals, senior intelligence officers and forensic officials, Mr. Erdogan said. The Saudis also conducted reconnaissance in rural areas outside the city where investigators have been searching for Mr. Khashoggi’s remains, the president said.

“It is clear that this savage murder did not happen instantly but was planned,” Mr. Erdogan said, challenging the official Saudi account.

But while Mr. Erdogan offered some new details and confirmed others, the speech mainly served to make clear that Mr. Erdogan had no intention of dropping a case that has created an international furor.

He pressed the Saudis for an honest accounting of a killing that he pointedly noted occurred inside his country, and he posed a series of tough questions, throwing down a challenge to the Saudi leadership.

‘‘Why was a team of 15 Saudi men, all with qualifications related to the incident, gathering in Istanbul on the day of the murder? We are seeking answers to this question. On whose orders did those individuals go there?’’

Saudi Arabia has said that 18 officials are under investigation in the killing, but Mr. Erdogan said that he would call King Salman of Saudi Arabia and ask that the case be adjudicated in Istanbul, not in Riyadh or elsewhere in Saudi Arabia.

The killing of Mr. Khashoggi, 59, inside the Saudi Consulate raised questions of international law and diplomatic conventions that concerned the entire world community, Mr. Erdogan said, clearly trying to broaden the pressure on the Saudi government.

“This murder might have been committed at a consulate building which may be considered Saudi Arabian land, but it rests within the borders of Turkey,” Mr. Erdogan said, adding that international agreements on the status of consular property “cannot allow the investigation of this murder to be concealed behind the armor of immunity.”

The Saudi government maintained at first that Mr. Khashoggi left the Saudi Consulate in Istanbul alive on Oct. 2. Since admitting on Friday that Mr. Khashoggi was killed inside the consulate, Saudi Arabia has claimed that his death was accidental and that the operation was not authorized by the country’s crown prince, Mohammed bin Salman.

Mr. Erdogan’s much-anticipated address, to the weekly gathering of his party in the Parliament chamber in Ankara, came after more than two weeks of carefully orchestrated leaks to the news media by Turkey that implicated the highest levels of the Saudi government.

Mr. Erdogan promised on Sunday that he would reveal the details of Turkey’s investigation in his speech on Tuesday. Previously, he had said little in public about Mr. Khashoggi’s disappearance, but he had waged a behind-the-scenes battle through a campaign of government leaks to international and Turkish news outlets.

Confirming many of those details on Tuesday, the Turkish president outlined the Saudi planning as he gave a detailed timeline of events since Sept. 28, when Mr. Khashoggi first visited the Saudi Consulate to request documents to allow him to marry his Turkish fiancée.

Immediately after Mr. Khashoggi’s first visit to the consulate, some of the consular staff left for Saudi Arabia, Mr. Erdogan said. “A planning, a road map started to be established there,” he said. “Some of the consulate staff going to their country in a hurry implies that the preparations were made there.”

“Some information being evaluated by our security and intelligence units points to an absolutely premeditated act,” he added. But he warned that Turkey would not accept an outcome in which the blame was placed only on those who carried out the killing without also exposing those who gave the orders.

“Putting all the burden on a few security and intelligence members would satisfy neither us nor the international community,” he said. “We could be satisfied only if everyone, from the one giving the order to the one who carried it out, are called to account.”

That was the closest Mr. Erdogan came to calling out Prince Mohammed, who has denied any knowledge of the plot despite his close ties to many of the suspects.

Mr. Erdogan showed deference to the Saudi king, but pressed him to conduct a fairer investigation, and the president seemed to suggest that it was not acceptable to allow the crown prince to lead the investigation or to oversee the intelligence service.

“I do not doubt the sincerity of the Custodian of the Two Holy Mosques, King Salman bin Abdulaziz,” Mr. Erdogan said. “Still, such a critical investigation should be conducted by a fair committee which has not the tiniest doubt of connection to the murder.”

And with rhetorical flair, he enunciated the many questions still outstanding in the case.

“Why has the consulate general building not been opened right away but days after? We’re seeking answers. When the murder was so clear, why have so many inconsistent statements been made? Why has the body of someone, the killing of whom has been officially admitted, not been found?”

Although Mr. Erdogan was careful to avoid a direct clash with Riyadh, the Saudi prevarication has clearly angered him. He told journalists that he had complained to a high-level Saudi delegation that the consul’s handling of the case had been “frivolous.”

Mr. Erdogan’s promise to give the unvarnished truth caused a new flurry of diplomatic activity. Ibrahim Kalin, the national security adviser and presidential spokesman, said at a news conference in Ankara on Monday that Mr. Erdogan had had a phone call with President Trump over the weekend, and that the two discussed the Khashoggi case.

The White House sent the C.I.A. director, Gina Haspel, to Istanbul to help the Turkish government with its investigation, according to an official. But in Riyadh, Treasury Secretary Steven Mnuchin held a wide-ranging meeting with Prince Mohammed.

Analysts described two camps among political leaders: those who wanted a diplomatic arrangement to allow the scandal to blow over, and those who wanted to take stronger action against the kingdom and even the crown prince.

On Sunday, the spokesman for Mr. Erdogan’s Justice and Development Party, Omer Celik, dismissed any suggestion of a deal being hatched between Turkey and Saudi Arabia or indeed among Turkey, Saudi Arabia and the United States.

“The claim of negotiations is immoral,” he said at a news briefing in Ankara. “It is our duty of honor to bring out the truth. This is a situation in which Turkey is appreciated.”

Turkish officials echoed Mr. Erdogan’s challenge to the Saudi government — and to the crown prince in particular — to come clean. Yet there were signs of softness amid the outrage.

“The issue is to reveal a vicious murder,” Mr. Kalin, the presidential spokesman, said.

“Our president’s line is clear from the beginning,’’ he added. ‘‘It is our duty and aim to reveal the event in all its details. Nothing about this event will stay a secret,” he said, adding a non sequitur: “Saudi Arabia is a brother country to us.”

After listening to Mr. Erdogan’s speech on Tuesday, Soner Cagaptay, director of the Turkish Research Program at the Washington Institute for Near East Policy, said, “He doesn’t want to rupture with the Saudi king.”

“Erdogan has always been deferential toward the king, whom he respects as the protector of Islam’s holy mosques, and has decided to separate the king from his son, targeting only the crown prince,” he said.

The speech pointed to a success of American mediation in the affair, Mr. Cagaptay said, adding, “Erdogan has agreed to give these efforts more time.”

Mr. Erdogan largely confined himself to confirming what his government had already leaked to the news media, occasionally adding new details, rather than dropping new bombshells. And he did not mention Turkish officials’ claims that his government had audio and video recordings of the killing, and that Mr. Khashoggi had been dismembered with a bone saw inside the consulate.

But while not directly implicating the crown prince, Mr. Cagaptay said Mr. Erdogan was nonetheless charging him with responsibility. “He’s embracing a strategy on M.B.S. to undermine him in the long term,” Mr. Cagaptay wrote in an email, referring to Prince Mohammed by his initials.

Mr. Erdogan was still intent on internationalizing the Khashoggi case to engage international pressure, particularly from the United States, on Riyadh to replace or sideline Prince Mohammed, Galip Dalay, a nonresident fellow at Brookings Doha Center and a visiting scholar at Oxford University, said in comments before the speech.

“Turkey wants him sidelined or for his powers to be dramatically reduced,” he said.

Nevertheless, Mr. Dalay added, Mr. Erdogan does not want a direct fight with Saudi Arabia. “He does not want to turn this into a bilateral argument between Saudi Arabia and Turkey,” he said of the Turkish president. “He wants it to be on one side M.B.S. and on the other a murdered journalist.”