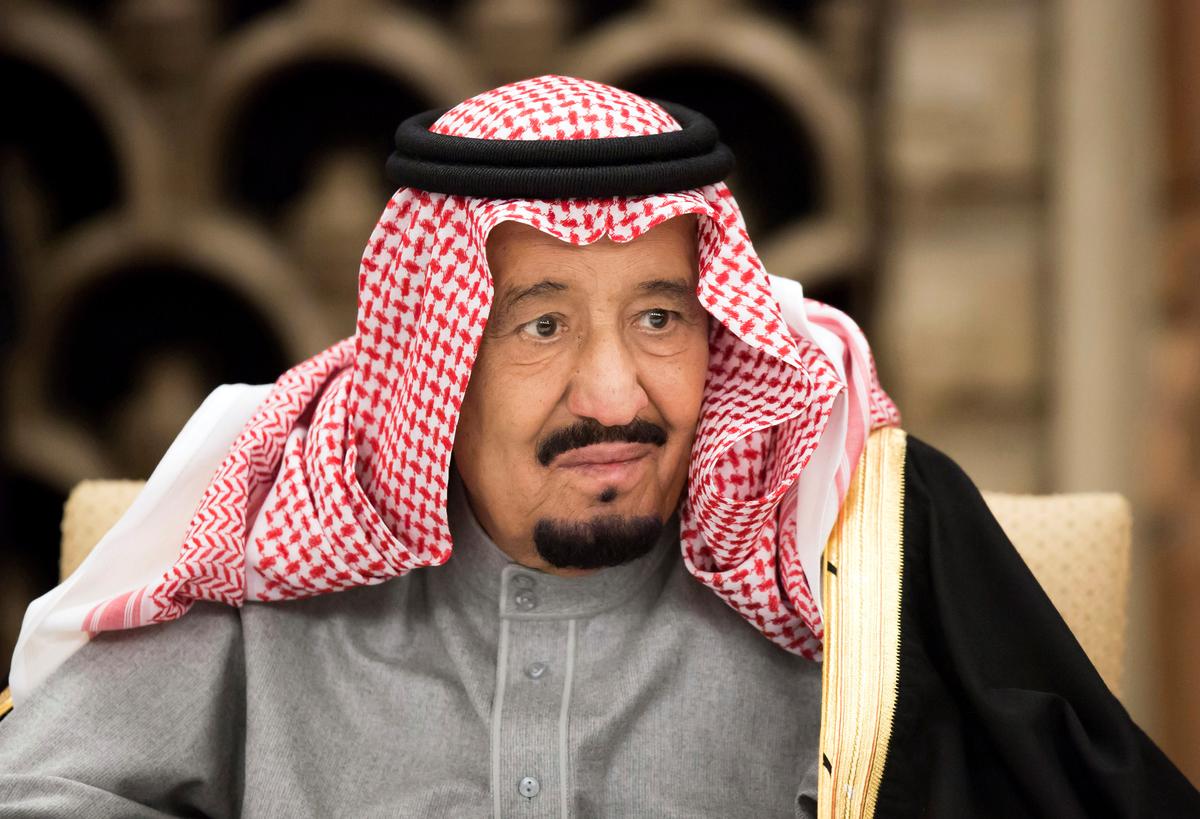 DUBAI (Reuters) – So grave is the fallout from the disappearance of Saudi journalist Jamal Khashoggi that King Salman has felt compelled to intervene, five sources with links to the Saudi royal family said.

Last Thursday, Oct. 11, the king dispatched his most trusted aide, Prince Khaled al-Faisal, governor of Mecca, to Istanbul to try to defuse the crisis.

World leaders were demanding an explanation and concern was growing in parts of the royal court that the king’s son Crown Prince Mohammed bin Salman, to whom he has delegated vast powers, was struggling to contain the fallout, the sources said.

During Prince Khaled’s visit, Turkey and Saudi Arabia agreed to form a joint working group to investigate Khashoggi’s disappearance. The king subsequently ordered the Saudi public prosecutor to open an inquiry based on its findings.

“The selection of Khaled, a senior royal with high status, is telling as he is the king’s personal adviser, his right hand man and has had very strong ties and a friendship with (Turkish President) Erdogan,” said a Saudi source with links to government circles.

Since the meeting between Prince Khaled and Erdogan, King Salman has been “asserting himself” in managing the affair, according to a different source, a Saudi businessman who lives abroad but is close to royal circles.

Saudi officials did not immediately respond to Reuters questions about the king’s involvement in helping to supervise the crisis. A spokesman for Prince Khaled referred Reuters to government representatives in Riyadh.

Khashoggi, a U.S. resident and leading critic of Prince Mohammed, vanished after entering the Saudi consulate in Istanbul on Oct. 2. Turkish officials say they believe the Saudi journalist was murdered there and his body removed, allegations which Saudi Arabia has strongly denied.

Initially the king, who has handed the day-to-day running of Saudi Arabia to his son, commonly known as MbS, was unaware of the extent of the crisis, according to two of the sources with knowledge of the Saudi royal court. That was partly because MbS aides had been directing the king to glowing news about the country on Saudi TV channels, the sources said.

That changed as the crisis grew.

“Even if MbS wanted to keep this away from the king he couldn’t because the story about Khashoggi’s disappearance was on all the Arab and Saudi TV channels watched by the king,” one of the five sources said.

“The king started asking aides and MbS about it. MbS had to tell him and asked him to intervene when Khashoggi’s case became a global crisis,” this source said.

Since he acceded to the throne in January 2015, the king has given MbS, his favorite son, increasing authority to run Saudi Arabia. But the king’s latest intervention reflects growing disquiet among some members of the royal court about MbS’s fitness to govern, the five sources said.

MbS, 33, has implemented a series of high-profile social and economic reforms since his father’s accession, including ending a ban on women driving and opening cinemas in the conservative kingdom.

But he has also marginalized senior members of the royal family and consolidated control over Saudi’s security and intelligence agencies.

His reforms have been accompanied by a crackdown on dissent, a purge of top royals and businessmen on corruption charges, and a costly war in Yemen.

Khashoggi’s disappearance has further tarnished the crown prince’s reputation, deepening questions among Western allies and some Saudis about his leadership.

“Even if he is his favorite son, the king needs to have a comprehensive view for his survival and the survival of the royal family,” said a fourth Saudi source with links to the royal court.

“In the end it will snowball on all of them.”

Saudi officials did not immediately respond to Reuters requests for comment.

Saudi Arabia has repeatedly denied any role in Khashoggi’s disappearance. But the sources familiar with the royal court said the reaction from the United States, an ally for decades, had contributed to the king’s intervention.

“When the situation got out of control and there was an uproar in the United States, MbS informed his father that there was a problem and that they have to face it,” another source with knowledge of the royal court said.

The crown prince and his aides had initially thought the crisis would pass but they “miscalculated its repercussions”, this source said.

Turkish officials have made clear they believe Khashoggi was killed inside the consulate, and two Turkish sources have told Reuters police have audio recordings to back up that assertion.

U.S. Senator Lindsey Graham, a Republican close to President Donald Trump, on Tuesday accused MbS of ordering Khashoggi’s murder and called him a “wrecking ball” who is jeopardizing relations with the United States. He did not say what evidence he was basing the allegation on.

Trump said on Thursday he presumed Khashoggi was dead but that he still wanted to get to the bottom of what exactly happened. Asked what would be the consequences for Saudi Arabia, Trump said: “Well, it’ll have to be very severe. I mean, it’s bad, bad stuff. But we’ll see what happens.”

Trump has previously said “rogue killers” may have been responsible and has ruled out cancelling arms deals worth tens of billions of dollars. On Tuesday, Trump said he had spoken with MbS and that the crown prince told him he did not know what had happened in the consulate where Khashoggi went missing.

The case poses a dilemma for the United States, as well as Britain and other Western nations. Saudi Arabia is the world’s top oil exporter, spends lavishly on Western arms and is an ally in efforts to contain the influence of Iran.

But in a sign of the damage, a succession of international banking and business chiefs, including IMF Managing Director Christine Lagarde, JP Morgan Chief Executive Jamie Dimon and Ford Chairman Bill Ford, have pulled out of a high-profile investment conference in Saudi Arabia this month.

U.S. Treasury Secretary Steven Mnuchin on Thursday also abandoned plans to attend, as did Britain’s trade minister and the French and Dutch finance ministers, putting the event in question.

Saudi officials have said they plan to move forward with the conference, scheduled for Oct. 23-25, despite the wave of cancellations.

Neither JP Morgan nor Ford would elaborate on the reasons for the decision not to attend and did not comment on whether concerns about the disappearance of Khashoggi were a factor.

Lagarde had previously said she was “horrified” by media reports about Khashoggi’s disappearance. An IMF spokesperson did not give a reason for her deferring her trip to the Middle East.

Before the king’s intervention, Saudi authorities had been striking a defiant tone, threatening on Sunday to retaliate with greater action against the U.S. and others if sanctions are imposed over Khashoggi’s disappearance. A Saudi-owned media outlet warned the result would be disruption in Saudi oil production and a sharp rise in world oil prices.

“Reaction and threats to the possible sanctions of the last 24 hours were still (coming) from the crown prince,” the businessman close to royal circles said on Monday. “The king is now holding the file personally … and the tone is very different.”

The king has spoken directly with Erdogan and Trump in recent days. Both the king and his son met U.S. Secretary of State Mike Pompeo when he visited Riyadh on Tuesday.

King Salman, 82, spent decades as part of the inner circle of the Al Saud dynasty, which long ruled by consensus. In four decades as governor of Riyadh, he earned a reputation as a royal enforcer who punished princes who were out of line.

Whether he is willing or able to resume that role in this crisis remains unclear, palace insiders say. One source with links to the royal court said the king was “captivated” by MbS and ultimately would protect him.

Still, there is precedent for the king’s intervention.

He stepped in this year to shelve the planned listing of national oil company Saudi Aramco, the brainchild of MbS and a cornerstone of his economic reforms, three sources with ties to government insiders told Reuters in August. Saudi officials have said the government remains committed to the plans.

And when MbS gave the impression last year that Riyadh endorsed the Trump administration’s still nebulous Middle East peace plan, including U.S. recognition of Jerusalem as Israel’s capital, the king made a public correction, reaffirming Riyadh’s commitment to the Arab and Muslim identity of the city.

Despite these rare instances of pushback, several of the sources close to the royal family said that King Salman had grown increasingly detached from decisions taken by MbS.

“He has been living in an artificially-created bubble,” said one of the sources. Lately, though, the king’s advisers have grown frustrated and begun warning him of the risks of leaving the crown prince’s power unchecked.

“The people around him are starting to tell him to wake up to what’s happening,” the source said.