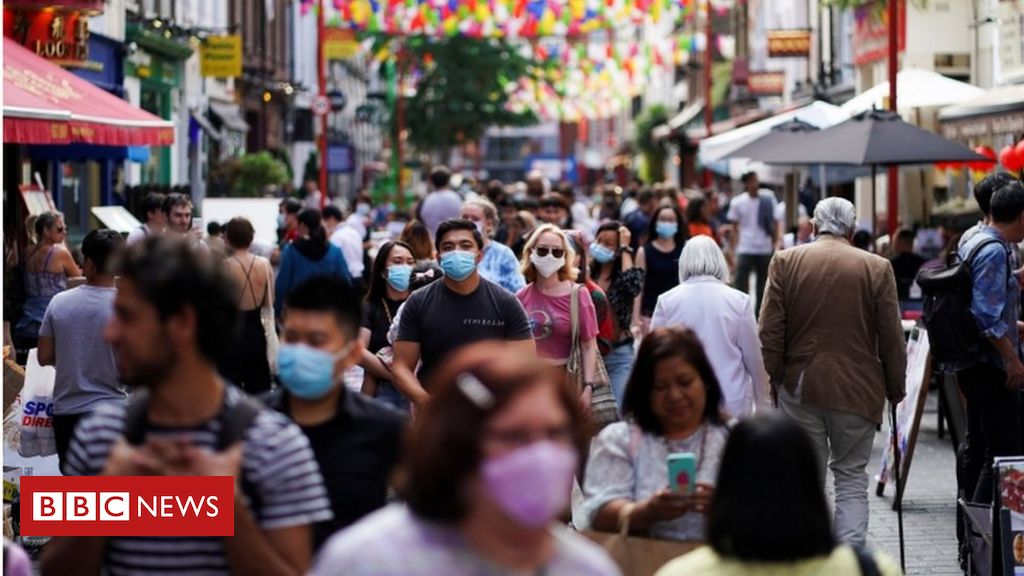 The UK is at a “critical point” in the coronavirus pandemic and “heading in the wrong direction”, the government’s chief medical adviser will warn.

Prof Chris Whitty believes the country is facing a “very challenging winter period” and is hold a televised briefing at 11:00 BST.

It comes after the prime minister spent the weekend considering whether to introduce further measures in England.

On Sunday, a further 3,899 daily cases and 18 deaths were reported in the UK.

The prime minister is understood to be considering a two-week mini lockdown in England – being referred to as a “circuit breaker” – in an effort to stem widespread growth of the virus.

He held a meeting at Downing Street on Sunday, along with Prof Whitty, Chancellor Rishi Sunak and Health Secretary Matt Hancock, to discuss possible measures.

BBC political editor Laura Kuenssberg said the view from No 10 was that while doing nothing “was not an option”, neither was a full national lockdown, and that whatever measures are imposed could be turned “off and on” throughout the winter.

Asked about reports of disagreements among cabinet ministers about whether or not to impose a second lockdown, Transport Secretary Grant Shapps told BBC Breakfast: “A conversation, a debate, is quite proper and that is exactly what you’d expect.

“Everyone recognises there is a tension between… the virus and the measures we need to take, and the economy and ensuring people’s livelihoods are protected.”

He added it was “very clear when you follow the data” that the UK is “at this tipping point where we may need to go further”.

At the briefing later, Prof Whitty will be joined by the government’s chief scientific adviser Sir Patrick Vallance, to present the latest data.

Prof Whitty is expected to say: “The trend in the UK is heading in the wrong direction and we are at a critical point in the pandemic.

“We are looking at the data to see how to manage the spread of the virus ahead of a very challenging winter period.”

The two scientists are expected to explain how the virus is spreading and the potential scenarios as the winter approaches.

They are also expected to share data on other countries who are experiencing a second wave, and explain how the UK could face similar situations.

Commenting on the upcoming announcement, Mr Shapps said: “I’ve heard their briefing and it is very stark.”

Prof Chris Whitty and Sir Patrick Vallance were the mainstays of the Downing Street press conferences when the virus was at its peak.

So you can assume that their briefing on the latest data will not convey good news.

The two men spent much of Sunday afternoon behind Downing Street’s black door, poring over the data with the health secretary, the chancellor, senior officials and the prime minister himself.

What has been concerning some of those inside No 10 are predictions that there could be a significant number of deaths a day from Covid by the end of next month unless further action is taken.

Ministers agree that there should not be a full national lockdown, but there are tensions around the cabinet table over precisely which, more limited measures, to take.

On Sunday, Mr Hancock said that with hospital admissions for the disease doubling “every eight days or so”, further action was needed to prevent more deaths.

He warned the country was facing a “tipping point”, as the government considers further restrictions.

“If everybody follows the rules then we can avoid further national lockdown,” he said.

Labour leader Sir Keir Starmer said he would support any new measures but warned that a second national lockdown was becoming more likely because the Test and Trace programme was in a state of “near collapse”.

London Mayor Sadiq Khan said he would meet council leaders on Monday and then recommend any London-specific measures to ministers.

He believes the capital city may be just “two or three days” behind the hotspots of the North West and North East of England.

More areas in north-west England, West Yorkshire and the Midlands, will face further local restrictions from Tuesday, taking the number of people affected by increased local measures in the UK to around 13.5 million.

The development comes as, nationally, daily case numbers approach the 5,000 new cases a day the UK saw in April, at the peak of the epidemic.

However, back then, there was no mass testing so it is not known exactly how many cases there really were. Best estimates suggest there were actually around 100,000 new infections a day at the end of March.

Over the weekend the government announced that people in England who refuse an order to self-isolate could be fined up to £10,000 from 28 September.

However, the government is facing resistance from some senior Conservative MPs who are concerned that ministers are imposing new coronavirus restrictions without giving Parliament a say.

The Coronavirus Act 2020, which became law in March, gave the government wide-ranging powers in order to manage the pandemic.

But Sir Graham Brady, who represents Tory backbenchers, said he would table an amendment which would require the government to put any new measures to a vote of MPs.

Sir Graham said ministers had “got into the habit of ruling by decree” on the issue, citing the “imposition” of the rule of six limit on social gatherings.

Meanwhile, Lady Hale, the former president of the Supreme Court, said Parliament had “surrendered” control to ministers during the pandemic, in an essay seen by the Guardian.