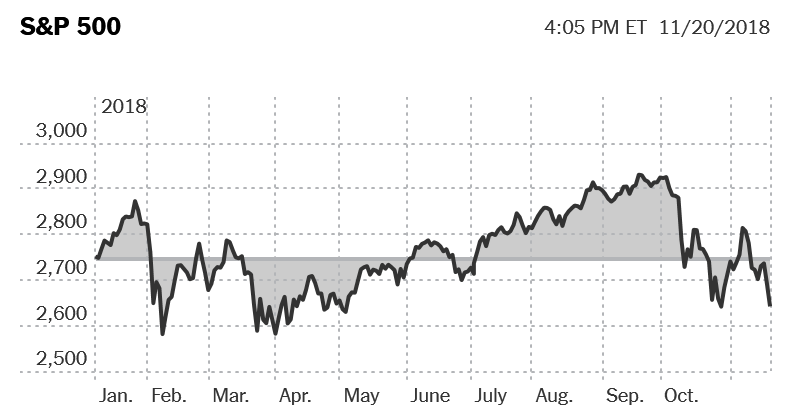 China, the world’s largest consumer of oil, has also been weighing on commodities. The price of crude, now just above $53 a barrel, has fallen nearly 30 percent since early October. On Tuesday, energy was the worst-performing part of the S&P 500, with companies like Exxon Mobil, Chevron and the oil-field services provider Schlumberger losing more than 2.5 percent.

Oil prices have been sliding despite signs that major producers like Saudi Arabia are considering cutting production. And that has amplified worries that China and the rest of the global economy may be in a weaker spot than markets realized.

Last quarter, China’s growth slowed to its lowest level since 2009, during the depths of the global financial crisis. Japan, the world’s third-largest economy, is also looking shaky, with the economy contracting in the third quarter, amid a slowdown in trade and investment.

Germany, the powerhouse behind Europe, also shrank unexpectedly during the third quarter as trade slumped and car production faltered. If Germany stumbles, it will add to the economic and political turmoil in a region already dealing with Britain’s chaotic exit from the European Union and Italy’s budget dispute with the bloc.

In 2018, America’s economy proved largely immune to such issues. But the global slowdown could eventually spill over into the United States, particularly as the impact of this year’s tax cuts fades in the coming years. Economists expect that domestic growth, which is close to 3 percent this year, will slow to 2 percent by 2020, according to estimates published by FactSet.

For the economy, that is a respectable performance. But for investors, a slowdown is likely to be uncomfortable.