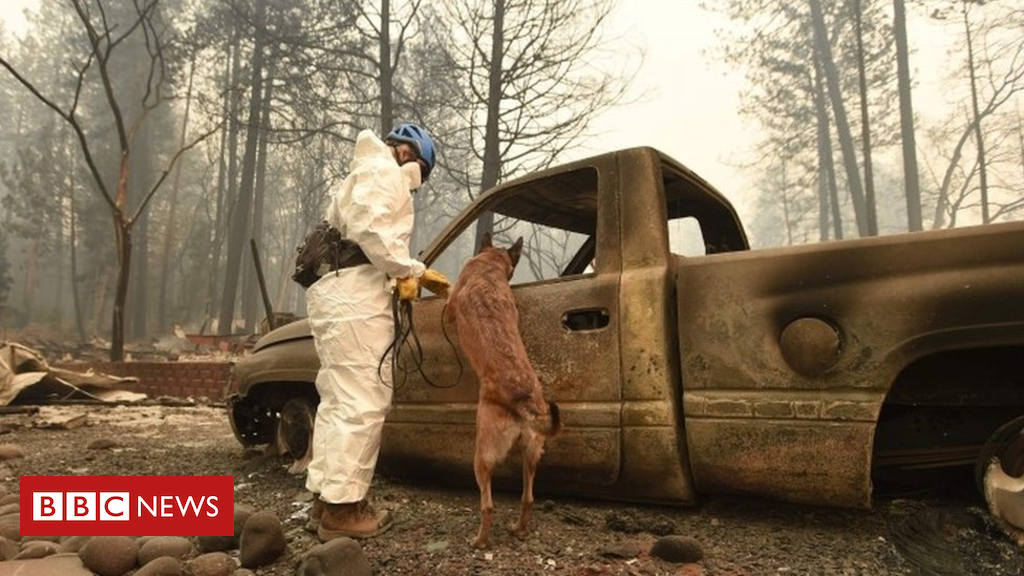 US President Donald Trump has visited California to survey the deadliest and most destructive wildfire in the state’s history.

The Camp Fire, in northern California, has killed at least 76 people.

More than 1,200 people have been reported missing, although officials say that figure could fluctuate.

In the destroyed town of Paradise, Mr Trump described the scene as “sad” and reiterated his disputed claim that poor forest management was to blame.

“We do have to do management maintenance and we’ll be working also with environmental groups. I think everyone’s seen the light,” he said.

“I don’t think we’ll have this again to this extent,” he added.

Experts have pointed to the weather, climate change and population shifts as bigger causes of the wildfires.

Besides the Camp Fire, firefighters are also tackling several other blazes, including the Woolsey Fire near Los Angeles which has claimed at least three lives.

Adding to the misery, scores of people have become sick after outbreaks of the norovirus at shelters, and the air quality in northern California has been rated the world’s worst.

Heavy rain is forecast next week that could douse the flames but also bring mudslides and floods on hillsides stripped of vegetation.

What kind of welcome did President Trump get?

The US president was greeted by Governor Jerry Brown and his successor Gavin Newsom, both of whom are Democrats and have sparred with Mr Trump over the wildfires.

“Now is a time to pull together for the people of California,” Governor Brown tweeted.

In Paradise, Mr Trump praised the efforts of local law enforcement, politicians and the teams searching for survivors on the ground.

“This is very sad to see. As far as the lives are concerned, nobody knows quite yet,” he said. “Right now we want to take care of the people who have been so badly hurt.”

Some locals held up pro-Trump signs, although one called him a “moron”.

A local (who didn’t want to be named) is waiting for President Trump with a message pic.twitter.com/nS83fIpmRM

Later in the day, Mr Trump, Governor Brown and Governor-elect Newsom visited an area in southern California affected by the Woolsey fire.

Speaking to journalists, Mr Trump – who repeatedly referred to the devastated town of Paradise as “Pleasure” – and Mr Newsom pledged to work together to prevent future wildfire tragedies.

However, the president said it had not changed his point of view on climate change. Authorities have suggested the scale of the fire was in part fuelled by a severe lack of rain in the state.

What’s the latest on the Camp Fire?

The death toll rose to 76 on Saturday after more bodies were found, most of them in Paradise.

Troops are assisting forensics teams and cadaver dogs as they continue to search for human remains, eight days after the Camp Fire first broke out.

Sheriff Honea put the number of people unaccounted for at 1,276. However, he also said 714 people have been found alive and removed from the list.

On Friday, the sheriff described the list as “dynamic”.

“The information I am providing you is raw data and we find there is the likely possibility that the list contains duplicate names,” he said.

Some of those on the list may be fine but unaware they have been reported missing, or unable to call, authorities say.

The Camp Fire is now about 55% contained but fire officials say they may not have it fully under control until the end of the month.

Historically, California’s “wildfire season” started in summer and ran into early autumn – but experts have warned that the risk is now year-round.