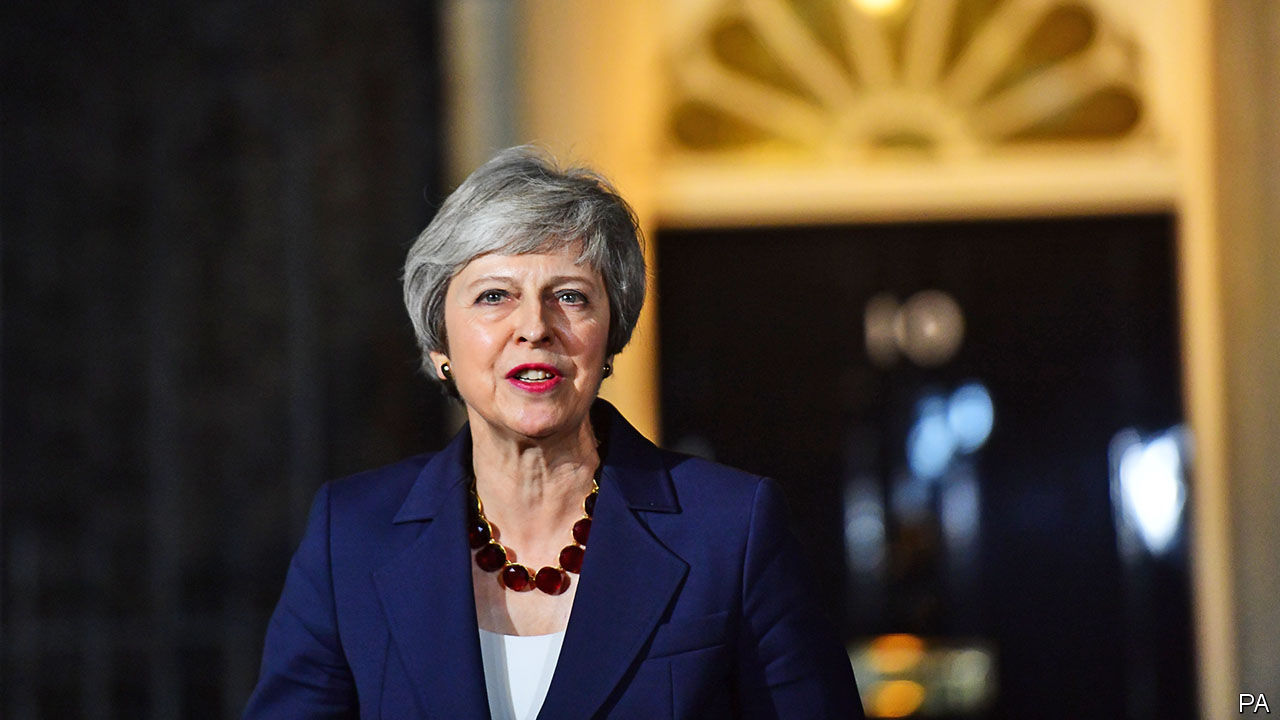 AFTER WHAT had seemed an endless period of delay and crunches evaded, this week Theresa May at last presented a draft Brexit deal agreed by negotiators in Brussels. The prime minister steered it through a lengthy cabinet meeting on November 14th. Yet the following morning her own Brexit secretary, Dominic Raab, quit in protest. Others followed. As Conservative MPs condemned the deal, talk of a leadership challenge to the prime minister grew.

Many more dangers lie ahead. The deal requires the consent of all 27 EU countries, with a special summit of leaders booked for November 25th. The European Parliament must approve it. Hardest of all, the agreement must pass the Westminster Parliament. With Leaver and Remainer MPs from all parties falling over each other to denounce the deal even before it was published, that hurdle looks very high.

The deal comes in two parts. The first is a draft withdrawal agreement that runs to 585 pages, including a protocol on Northern Ireland. The second is a seven-page political declaration about the future relationship between Britain and the EU. The first will become a legally binding treaty that covers such matters as Britain’s exit bill and EU citizens’ rights, as well as the so-called Northern Irish backstop. It will also create a standstill transition period after Brexit day on March 29th 2019, which will last until at least December 2020.

The much shorter second document will guide the future talks but be aspirational in nature. This may upset anyone who hoped Mrs May’s Brexit deal would be the end of the process. In fact, negotiations on almost every aspect of the future relationship, from security to trade, will begin only after Britain leaves the EU in March. Moreover, establishing a link between the two documents, on the basis that nothing is agreed until everything is agreed, will be difficult. That is a problem for those who believed payment of the exit bill would create useful bargaining leverage for a future trade agreement.

The main cause of delay in reaching a Brexit deal was Northern Ireland. The idea of a backstop plan that would avoid a hard border in Ireland in all circumstances was accepted by both sides last December. But Mrs May rejected the EU’s interpretation of the agreement, which was to keep Northern Ireland in a customs union and in regulatory alignment with its single market. She was partly driven by her government’s dependence on the Northern Irish Democratic Unionist Party (DUP), but also by her own revulsion at the notion of a customs border in the Irish Sea. The backstop in the withdrawal agreement is to keep the whole United Kingdom in a customs union with the EU until an alternative is found.

Yet two politically awkward tweaks were needed even for this to get through. The first concerns the question of how long the backstop lasts. Brexiteers hate the customs union because it precludes trade deals with third countries. So they wanted it to be time-limited (impossible, since this would negate the very purpose of a backstop) or at least for Britain to have the unilateral right to walk away from it. The compromise is an arbitration mechanism that will decide if the backstop, once invoked, is no longer needed. But that falls far short of a unilateral right of exit. MPs will want to see the legal advice on this point from the attorney-general, Geoffrey Cox, now a crucial pro-Brexit voice in the cabinet.

The second tweak was the determination of other EU countries to attach conditions to a UK–wide customs union. These have become known as “level playing-field” requirements. They include commitments to observe not just most single-market rules but also all EU environmental, labour and other standards. The fear of the EU 27 is of a Britain that benefits from frictionless trade in the customs union but is able to undercut continental competitors with laxer regulation. The EU wants to make clear that post-Brexit Britain is a rule-taker, not a rule-maker. By applying even more single-market rules to Northern Ireland, the EU’s backstop also clearly envisages greater regulatory (but not customs) checks in the Irish Sea.

It is easy in the Westminster bubble to forget that other EU countries have politics too. Indeed, their approval of the Brexit deal cannot be taken for granted. As Mujtaba Rahman of the Eurasia group, a consultancy, says, EU leaders may make further amendments to the level playing-field conditions or add new demands over access to British fisheries. Any such changes are likely to make the deal even less palatable in Westminster. And the EU’s determination to show that Britain will be worse off as a result of Brexit is likely to be supported by the economic-impact analysis the government has promised to give MPs.

Their already gloomy reaction to the withdrawal deal will only darken when they consider the accompanying political declaration. This has the benefit of being compatible with anyone’s preferred outcome, from a Norway-style relationship to a deal modelled on Switzerland or Canada. But in truth the EU 27 will be in control, with Britain having few cards to play. And the process is likely not just to be miserable but interminable. The Canadian free-trade deal took nine years; the two packages of Swiss bilateral deals 13. The process of ratifying any trade deal with Britain by all national and some regional parliaments will be tortuous.

These considerations chime with the view that Mrs May has failed to win most of the Brexit aims she set out to achieve (see table). Most MPs are disenchanted with the deal. The language used by some was venomous. Jacob Rees-Mogg, chairman of the European Research Group (ERG) of Eurosceptic Tory MPs, said the deal would make Britain a “slave state”. Boris Johnson, who quit as foreign secretary over Mrs May’s Chequers plan in July, called it “vassal-state stuff” that should be chucked out.

If all goes well, the parliamentary vote on the Brexit deal is likely to be held in mid-December. Even if it goes through there may be problems ahead, as Parliament must pass a mass of legislation, starting with a bill to give the deal legal effect and set a framework for transition. But there are serious doubts about whether MPs will approve the deal. Tory whips express confidence that the vote will be won. They hope that pressure from ministers, businesses and the EU itself will tell, as will fear of alternatives, notably of a no-deal Brexit. Yet the parliamentary arithmetic looks stacked against them.

Rebels with a cause

Start with the Tories. Steve Baker, who helps to manage the ERG, says over 50 hardline Brexiteers will vote against the deal. Mr Baker says he does not want a no-deal Brexit, but cheerfully admits that parliamentary rejection of the deal would produce “chaos”. The odds of this have been increased by the anti-Brexit wing of the party. Jo Johnson resigned as transport minister on November 9th to fight for a second referendum (see Bagehot). Along with Dominic Grieve, a former attorney-general, and others he may form part of a group of perhaps a dozen pro-European Tories voting against Mrs May. The 13 Scottish Tory MPs could be another problem, especially if they detect a sell-out on fisheries.

Tory opposition means that Mrs May will have to look to other parties to get her deal through. The DUP seems implacably opposed. Despite its official support of her government, it says it cannot accept any of the regulatory barriers in the Irish Sea implied by the deal. The Scottish Nationalists and Liberal Democrats are certain to vote no. That leaves the official Labour opposition as the only possible party in which to fish for favourable votes.

Labour’s position on Brexit has been consistent only in its ambiguity. Jeremy Corbyn, the party leader, is a lifelong Eurosceptic. His policy was in theory set by Labour’s latest party conference. It is to oppose any deal that does not deliver on an impossible-to-meet set of six tests. If the deal is defeated, he wants a general election. And if that is not obtainable, Labour is open to other options, including a public vote with staying in the EU as an option. Despite this, Mr Corbyn recently said that Brexit could not be stopped—only to be corrected by his shadow Brexit secretary.

The lure of defeating the government and, just possibly, precipitating an election, will surely drive most Labour MPs to vote no. Even the hard-core few that have previously backed Mrs May in Brexit votes cannot be relied on this time. But Tory whips believe that they might win over as many as 20-30 Labour MPs who are both hostile to Mr Corbyn’s leadership and anxious to avoid the risk of a no-deal Brexit. After all, it took a rebellion by pro-European Labour MPs to get Britain into the European project against hardline Tory opposition in the early 1970s.

Mrs May and her whips will mount a strong campaign to force through her deal, which she insists is in the national interest. Hardline Brexiteers will be told that defeat risks a reversal of Brexit. Softer MPs will hear that defeat could lead to Brexit with no deal. Others will be frightened by the prospect of a new prime minister, as the numbers of MPs’ letters calling for a Tory leadership contest approaches the 48 needed to force one. And others will fear even the remote possibility of an early election that might put Mr Corbyn in power.

Yet it is hard to see these arguments swaying enough MPs to swing the vote in favour of the deal. Nicky Morgan, a former Tory minister and chair of the Treasury select committee, puts the odds of success at 50-50. That they are so low is largely Mrs May’s fault. Had she been more honest earlier about the basic trade-off between securing better access to the EU’s market at the cost of being bound by most of its rules, she might have made her compromise more appealing.