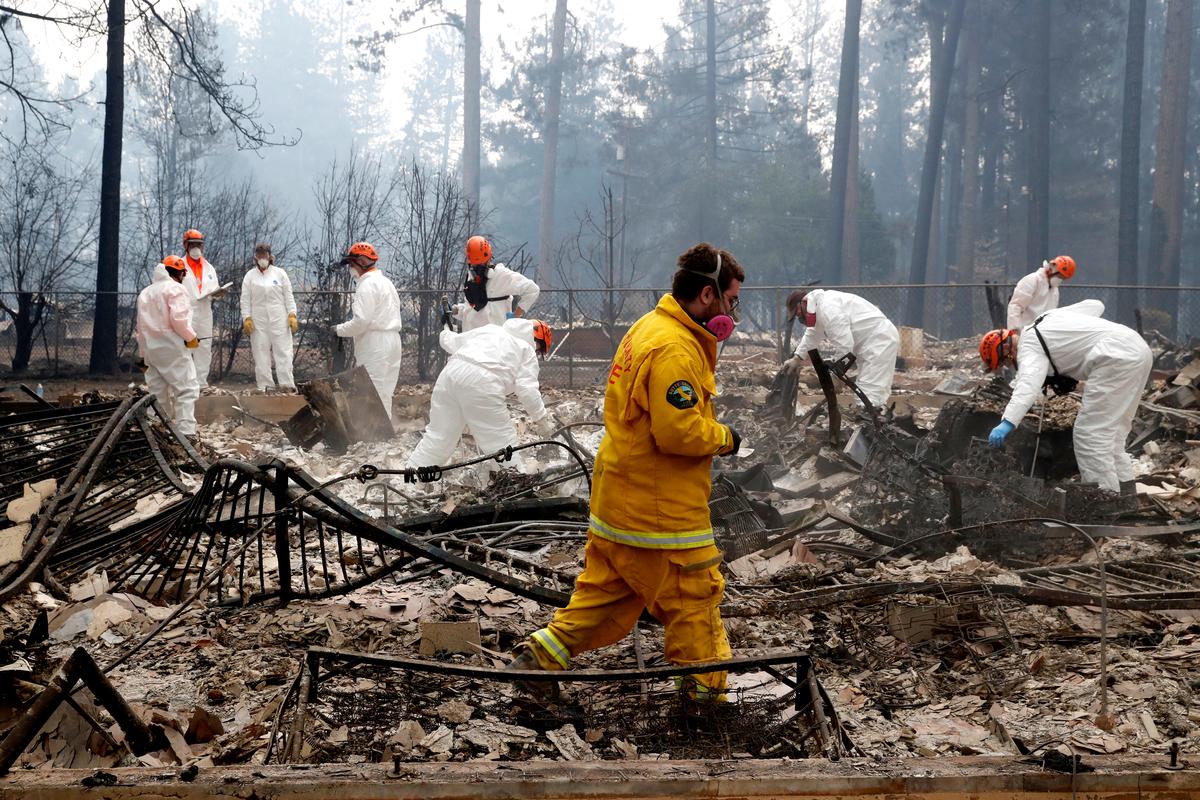 PARADISE, Calif. (Reuters) – White-clad forensic teams with cadaver dogs fanned out across a ghostly landscape strewn with ash and charred debris searching on Tuesday for more human remains left from a blaze that killed at least 42 people in California’s deadliest wildfire disaster.

The intensified effort to locate victims came on the sixth day of a blaze that incinerated over 7,000 homes and other buildings, including most of the town of Paradise in the Sierra foothills of rural Butte County about 175 miles (280 km) north of San Francisco.

County Sheriff Kory Honea said 228 people were listed as missing, and his office also was working to determine the fate of nearly 1,300 individuals whose loved ones had requested “well-being checks” on their behalf.

By Tuesday, the killer blaze dubbed the Camp Fire had blackened 125,000 acres (50,500 hectares) of drought-parched scrub, up 8,000 acres from the night before, but crews had carved containment lines around nearly a third of the fire’s expanding perimeter.

More than 50,000 area residents remained under evacuation orders and 15,500 structures were still listed as threatened by the blaze.

“Things look much better than yesterday, due to weather conditions,” said Scott McLean, a spokesman for the California Department of Forestry and Fire Protection.

The news was likewise more upbeat on the southern end of California’s wildfire front, where a blaze called the Woolsey Fire has killed two people, destroyed over 400 structures and displaced some 200,000 people in the mountains and foothills near the Malibu coast west of Los Angeles.

That blaze has scorched 96,000 acres (39,000 hectares) of chaparral-covered rolling hills and canyons spanning Ventura and Los Angeles counties, an area roughly the size of Denver.

Beyond the loss of homes, Los Angeles County Sheriff Jim McDonnell said the fire had destroyed “deep infrastructure such as power lines, water lines, sewers, roads, lights and other things that make a city, a city, particularly a safe one.”

But containment of the fire grew to 35 percent on Tuesday as four communities previously under evacuation orders were reopened to residents, a sign firefighters were gaining the upper hand, Los Angeles County Fire Chief Daryl Osby said.

The causes of both the Camp and Woolsey fires were listed as under investigation. But two utility companies, Southern California Edison and Pacific Gas & Electric, reported to regulators in recent days that they experienced problems with transmission lines or substations in areas where the blazes were reported around the time that they started.

The battle against the Camp Fire on Tuesday was being waged most intently in steep, thickly wooded canyons filled with desiccated brush along the southern flank of the blaze.

“The fuel is so dry that if we get any wind, the fire is going to move,” fire Captain Bill Murphy, a spokesman for the incident command, told Reuters.

While prospects for suppressing the fire grew more hopeful, authorities stepped up the grim task of sifting through rubble of homes obliterated in flames that roared through Paradise on Thursday night, sending residents fleeing for their lives.

Bodies of some victims were found in and around the burned-out wreckage of vehicles engulfed in the firestorm as evacuation traffic halted in deadly knots of gridlock hours after the fire erupted.

Sheriff Honea announced on Monday the remains of at least 42 people had been recovered, making the Camp Fire the deadliest single wildfire in California history, surpassing the Griffith Park fire in Los Angeles that killed 29 people in 1933.

A volunteer search and rescue crew from Calaveras County comb through a home destroyed by the Camp Fire in Paradise, California, U.S., November 13, 2018. REUTERS/Terray Sylvester

It remained unclear how many of the 200-plus individuals listed as missing had perished or merely fell out of touch in following chaotic evacuations.

Teams of workers wielding chainsaws cleared downed power lines and other obstacles from the streets, while forensics investigators picked through barren, fire-scorched lots in a town once home to 27,000 people.

On a residential street in Paradise lined with burned-down houses, a 10-member forensics search team wearing white protective suits and red helmets used a dog to scour the debris.

“Look for skulls, the big bones,” one forensics worker said to others as they used metal poles and their hands to sift through ruins.

Nearby at a community swimming pool, recovery workers stirred green, darkened waters with long poles to probe for bodies.

Honea said 150 additional search personnel were due to arrive in the area, reinforcing 13 coroner-led recovery teams already there.

The sheriff has requested portable morgue teams from the U.S. military, as well as a “disaster mortuary” crew, additional cadaver dogs and forensic anthropology units.

“We mourn the lives of those lost and we pray for the victims,” Trump said from the White House on Tuesday while thanking first responders. “We will do everything in our power to support and protect our fellow citizens in harm’s way.”

California has endured two of its worst wildfire seasons in history the past two years, which experts attribute in large part to prolonged drought across the western United States.