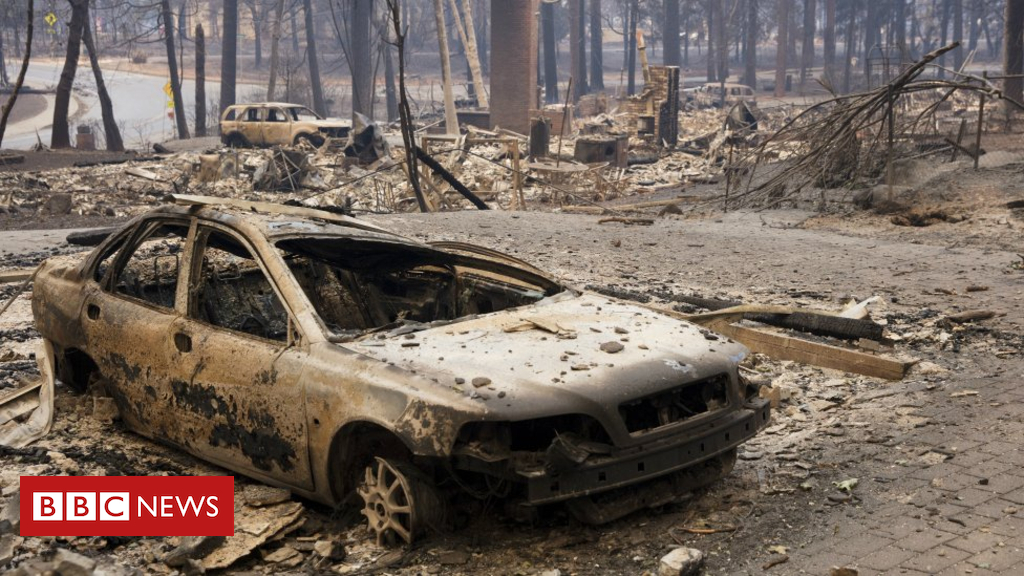 The death toll in wildfires sweeping California has risen to 31, with more than 200 people still missing, officials have said.

Six more people were confirmed killed in the Camp Fire in the north of the state, taking the toll there to 29.

That fire now equals the deadliest on record in California – the 1933 Griffith Park disaster in Los Angeles.

In the south, the Woolsey Fire has claimed two lives as it damaged beach resorts including Malibu.

An estimated 250,000 people have been forced to flee their homes to avoid three major blazes in the state.

The appeal came a day after Mr Trump threatened to cut funding for California, blaming the fires on poor forest management.

What is the latest on the Camp Fire?

Emergency teams have been sifting through the remains of more than 6,700 homes and businesses burned down in the town of Paradise.

The town and surrounding area bore the brunt of the inferno, which started in nearby forest on Thursday.

At a news conference late on Sunday, Butte County Sheriff Kory Honea said the bodies of five people had been found in their burned-out homes and a sixth was found inside a vehicle.

He said that at least 228 people were still unaccounted for, adding that DNA testing equipment was being sent should it be required to help identify victims.

The mayor of Paradise, Jody Jones, gave the BBC an update on the situation in the town.

“Most of the residential [area] is gone. I would say 90%,” she said. “I had an opportunity to go up there and take a look for myself. Just about everyone I know lost their home.”

The fire is the most destructive in the state’s history and the joint deadliest.

“Containment” refers to a physical barrier around a fire that stops it spreading – such as a river, or a shallow, 10ft(3m)-wide trench dug by fire crews. If a fire is 100% contained, this means it has containment lines around its whole perimeter. However – the fire may still burn for days or weeks to follow.

Police said suspected looters were arrested in Paradise on Saturday, and may have been trying to impersonate Forest Service workers.

What about the Woolsey Fire?

The blaze started on Thursday near Thousand Oaks, about 40 miles (64km) north-west of central Los Angeles.

It has consumed at least 85,500 acres and destroyed at least 177 buildings, officials said. It is only 10% contained. The smaller Hill Fire, nearby, has scorched 4,530 acres and is 75% contained.

Looting was also reported in the southern fire area over the weekend.

Luxury homes in Malibu and other beach communities are among the properties razed by the flames.

Hollywood actor Gerard Butler shared a picture of a charred house on Twitter, writing: “Returned to my house in Malibu after evacuating. Heartbreaking time across California.” He thanked firefighters for their “courage, spirit and sacrifice”.

Returned to my house in Malibu after evacuating. Heartbreaking time across California. Inspired as ever by the courage, spirit and sacrifice of firefighters. Thank you @LAFD. If you can, support these brave men and women at https://t.co/ei7c7F7cZx. pic.twitter.com/AcBcLtKmDU

Paramount Ranch in Agoura Hills, where the HBO series Westworld is filmed, was also destroyed.

On Saturday, firefighters used a respite from strong winds to drop fire retardant in a bid to strengthen firebreaks.

But officials warned that winds of up to 70mph (112km/h) are expected over the coming days, meaning fires could spread quickly and unexpectedly.

“Winds are already blowing. They are going to blow for the next three days. Your house can be rebuilt but you can’t bring your life back,” said Los Angeles County fire chief Daryl Osby.

Why are the fires so bad?

Historically, California’s “wildfire season” started in summer and ran into early autumn. But experts have warned that the risk is now year-round.

The current fires are being blamed on a combination of climate change and weather conditions.

The state’s 40-million-strong population also helps explain the fires’ deadliness. That number is almost double what it was in the 1970s, and people are living closer to at-risk forest areas.

Citing the role of a warming climate, Governor Brown declared: “This is not the new normal, this is the new abnormal.”

Musician Neil Young made the same link, writing on his website: “I have lost my home before to a California wildfire, now another.”

“We are vulnerable because of climate change; the extreme weather events and our extended drought is part of it.”