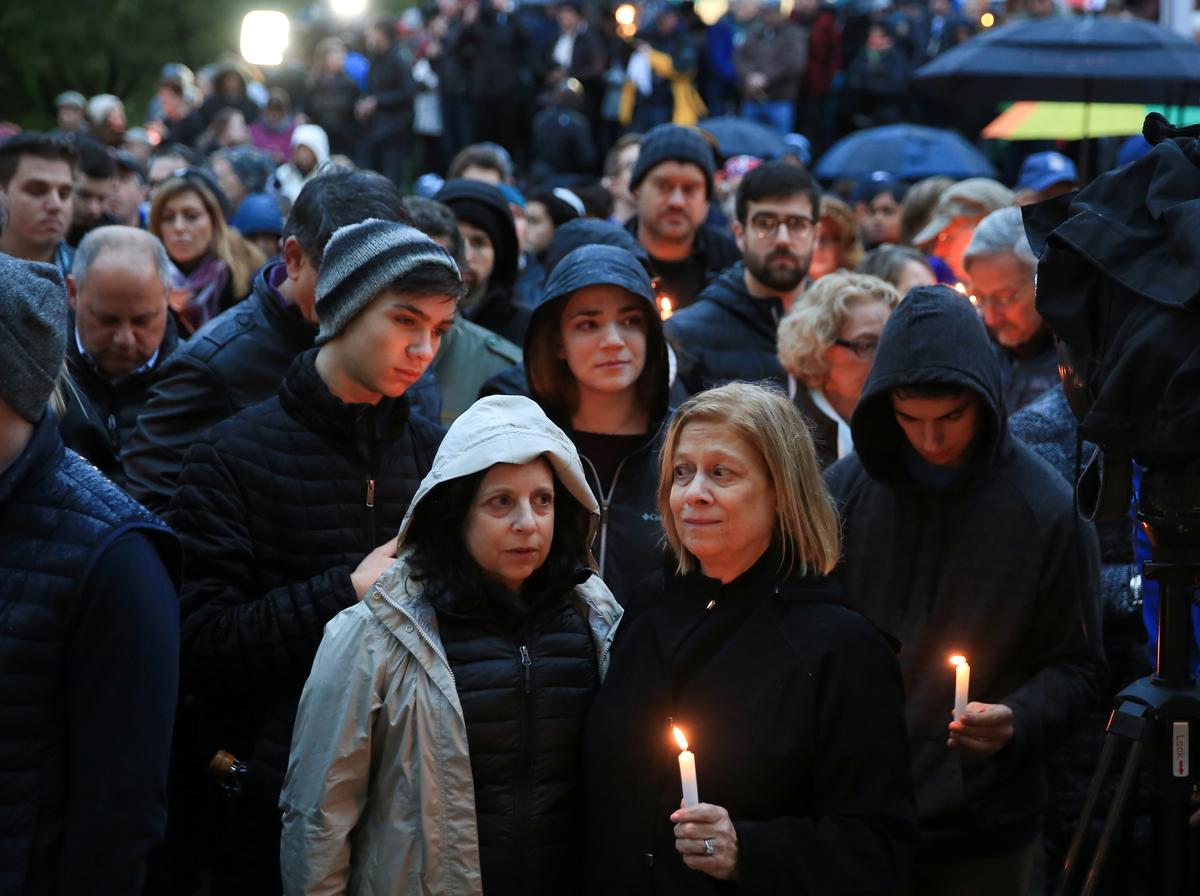 PITTSBURGH (Reuters) – The names of those shot dead by a gunman yelling “All Jews must die” will be released on Sunday after the deadliest attack on the Jewish community in the United States, officials said.

People mourn the loss of life as they hold a vigil for the victims of Pittsburgh synagogue shooting in Pittsburgh, Pennsylvania, U.S., October 27, 2018. REUTERS/John Altdorfer

The gunman stormed a Pittsburgh synagogue during Saturday services, killing 11 worshippers and wounding six other people including four police officers, before he was arrested.

Pittsburg Mayor Bill Peduto told CBS television station KDKA that when the list of the dead is released by federal officials at a news conference at 9 a.m. on Sunday, it “will rip your heart out”, saying he personally knew some of the victims.

The Tree of Life synagogue in the city’s Squirrel Hill neighborhood, a heavily Jewish area, was holding a Shabbat religious service at the time of the shooting.

The mass shooting prompted security alerts at houses of worship around the country. It follows a spate of pipe bombs found mailed in recent days to prominent political figures, mostly Democrats including former President Barack Obama.

The U.S. Attorney’s Office said it would make public the charging complaint and an official affidavit, which may shed light on why Robert Bowers, 46, of Pittsburgh, allegedly shot the worshippers.

Bowers had made many anti-Semitic posts online, including one early on Saturday. In another, he slammed U.S. President Donald Trump for doing nothing to stop an “infestation” of the United States by Jews.

A social media post by Bowers on Saturday morning said a Jewish refugee organization, the Hebrew Immigrant Aid Society, “likes to bring invaders in that kill our people. I can’t sit by and watch my people get slaughtered. Screw your optics, I’m going in”.

The comment was posted on Gab, a Philadelphia, Pennsylvania-based social networking service created as an alternative to Twitter. In a statement, Gab.com confirmed the profile belonged to Bowers and also said it had suspended the account and contacted the FBI about it.

Bowers was taken into custody after a shootout with a SWAT team. Federal prosecutors charged him with 29 criminal counts including violence and firearms offenses, and violating U.S. civil rights laws.

“The actions of Robert Bowers represent the worst of humanity. We are dedicating the entire resources of my office to this federal hate crime investigation and prosecution,” U.S. attorney for western Pennsylvania Scott Brady told reporters.

The Anti-Defamation League and Jewish Council for Public Affairs described it as the deadliest attack on the Jewish community in the history of the United States.

FBI special agent Bob Jones said the Federal Bureau of Investigation, which is leading the probe, said the crime scene was the worst he had seen in 22 years with the FBI. He said he believed Bowers was acting alone, adding: “We have no knowledge that he was known to law enforcement before today.”

KDKA television cited police sources as saying Bowers walked into the building and yelled “All Jews must die”.

Jones said Bowers was armed with an assault rifle and three handguns.

He said authorities believed the suspect entered the synagogue, murdered the worshippers and was leaving when he encountered a uniformed police officer. The pair exchanged gunfire, Jones said, and Bowers reentered the building before a SWAT team arrived. After a shootout, he surrendered.

Bowers was taken to a hospital where he was listed in fair condition with multiple gunshot wounds.

Trump said in a tweet he was watching what he described as a “devastating” situation. He told reporters the killings might have been prevented if there had been an armed guard.

“If they had some kind of a protection inside the temple maybe it could have been a much more different situation, they didn’t,” he said. Police are normally only present at the synagogue for security on high holidays.

He called on Americans to rise above hate and ordered U.S. flags at the White House and public buildings to be flown at half-staff. He said he would visit Pittsburgh, but not when.

Mourners held a candlelit vigil for the victims. The Islamic Center Of Pittsburgh offered its condolences, and called on its community to donate blood.

The shooting followed attacks on other places of worship in recent years. On April 13, 2014, a pair of shootings occurred at a Jewish Community Center and a Jewish retirement community, both located in Overland Park, Kansas. A total of three people were killed in the shootings.

In 2015, a white supremacist murdered nine African Americans during a prayer service in Charleston, South Carolina.

In 2012, a neo-Nazi gunman with white supremacist ties walked into a Sikh gurdwara – or house of worship – in Oak Creek, Wisconsin, and murdered six Sikh Americans.