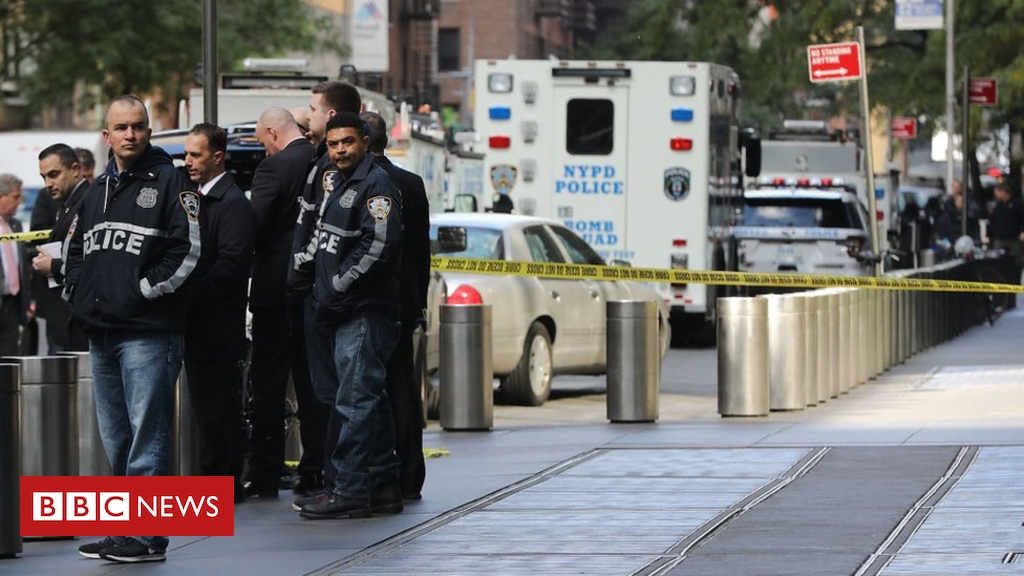 Suspected bombs were sent to locations in New York, the Washington DC area and Florida, authorities said on Wednesday.

Mr de Blasio told reporters it was an effort to terrorize and “to undermine our free press and leaders of this country through acts of violence”.

The FBI says the ongoing investigation is “of the highest priority”.

It has identified five similarly constructed packages and devices to date, including one confirmed to be a pipe bomb found at the home of liberal philanthropist and financier George Soros two days ago.

CNN’s New York office was evacuated on Wednesday morning after a suspected live bomb was sent to their mailroom.

Speaking at the White House, President Donald Trump said that these threats “have no place in America”.

“The safety of the American people is my highest and absolute priority,” he said.

“In these times we just have to unify. We need to come together and send one very clear unmistakable message that threats or acts of political violence of any kind have no place in America.”

All the apparent targets are regularly criticised by conservatives – especially by President Trump.

Some Democrats have accused the president of inciting violence with his past rhetoric, while some of his supporters have said they believe the packages are part of a Democratic plot to win votes in the mid-term elections.

There is no evidence for this and the police have not released any information about any suspects.

The attempted attacks come just under two weeks before the vote, with US politics highly polarised.

What has the reaction been?

There has been condemnation of the attacks across the political spectrum.

However, Mr Trump’s critics accused him of having incited violence with the language he has used against the media and his opponents.

The president has repeatedly called journalists, and CNN in particular, “fake news” and the “enemy of the people”.

On Wednesday, White House spokeswoman Sarah Sanders condemned the “attempted violent attacks” against the public figures. She then specified in a follow-up tweet that the White House also condemned threats made to CNN.

“There is a total and complete lack of understanding at the White House about the seriousness of their continued attacks on the media,” he said.

“The president, and especially the White House Press Secretary, should understand their words matter. Thus far they have shown no comprehension of that.”

In a joint statement, top Democrats Nancy Pelosi and Chuck Schumer also said the president’s words “ring hollow until he reverses his statements that condone acts of violence”.

Explosive devices were sent to the following individuals, according to the latest FBI statement:

The devices are suspected to be pipe bombs.

New York Police Commissioner James O’Neill also said law enforcement is analysing an “envelope containing white powder”, which was found in the packaging of the device sent to CNN.

The US Secret Service said in a statement that they recovered the package addressed to Mrs Clinton late on 23 October.

“Early this morning, October 24, 2018, a second package addressed to the residence of Former President Barack Obama was intercepted by Secret Service personnel in Washington, DC,” the statement said.

“Both packages were intercepted prior to being delivered to their intended location. The protectees did not receive the packages nor were they at risk of receiving them.”

Time Warner Center – where CNN’s New York offices are located – was just evacuated. The alarm went off as @jimsciutto and @PoppyHarlowCNN were on air reporting the packages sent to the Clintons and Obamas. @ShimonPro reporting it was over “a suspicious package.” pic.twitter.com/EYBsytil0o

An additional suspicious package addressed to Democratic Representative Maxine Waters is also being investigated by local law enforcement and the FBI.

US media say the package intended for Mr Holder was sent to an incorrect address and returned to the congresswoman’s office in Sunrise, Florida.

Mr Brennan’s package was sent to CNN as he was scheduled to appear on the network on Wednesday, US media report.

What have the apparent targets said?

Speaking at a campaign event in Florida, Mrs Clinton thanked the Secret Service and said she and her family “are fine”.

“It is a troubling time,” she said. “It is a time of deep divisions and we have to do everything we can to bring our country together. We also have to elect candidates who will try to do the same.”

A spokeswoman for Mr Obama declined to comment on the incident, and referred reporters to the Secret Service statement.