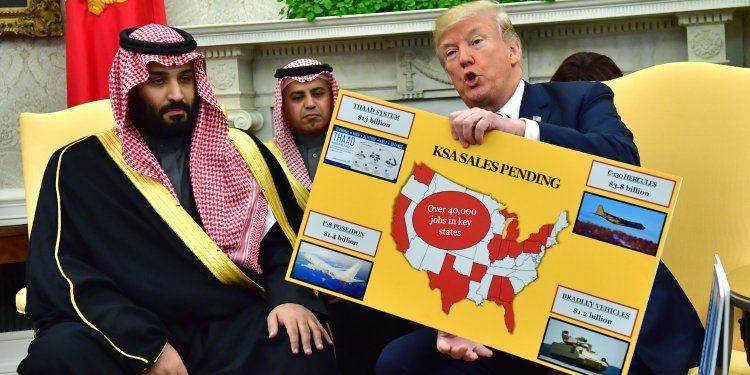 President Donald Trump said Friday that he approves of Saudi Arabia’s acknowledgement that the Saudi journalist Jamal Khashoggi died inside the Saudi Consulate in Istanbul, Turkey.

Trump called it “a great first step,” while speaking at a roundtable discussion with defense industry executives at Luke Air Force Base. An official statement from White House press secretary Sarah Huckabee Sanders echoed the same while offering condolences to Khashoggi’s family.

On Friday, Saudi Arabia admitted that Khashoggi, a Saudi national who was had been living in Virginia as a legal US resident with a green card, was killed after an encounter with Saudi agents at the consulate “led to a quarrel and a physical confrontation.” That admission on Friday followed nearly three weeks of conflicting statements from the Kingdom and from Turkish officials.

Khashoggi was an outspoken critic of his country and the crown prince, and reportedly feared for his safety before his disappearance on October 2.

Other Saudi media reports suggested Khashoggi was interrogated and eventually died in a chokehold as a result of a physical struggle. Turkish authorities long suspected the Kingdom had orchestrated the killing, citing recovered audio recordings.

Despite Saudi Arabia’s admission, Trump stopped short of calling for swift action against the country.

“We have a tremendous order,” Trump said.

“I would prefer if there was going to be some form of sanction,” Trump said, adding that “we don’t use as retribution, canceling $110 billion worth of work, which means 600,000 jobs. I know it sounds easy and it sounds good.”

Trump has continued to lay claim to $110 billion worth of defense trade deals with Saudi Arabia, without noting they have been merely “memorandums of intent” to fill that amount in the next 10 years.

“I went there to get that order,” Trump said, referring to his first foreign trip as president to Saudi Arabia. “Saudi Arabia was my first stop and everyone thought that was unusual but I said ‘I want to order tremendous amounts of stuff.'”

The White House described Khashoggi’s death as a “tragic incident” and said it would “continue to closely follow the international investigations.”

“We are saddened to hear confirmation of Mr. Khashoggi’s death, and we offer our deepest condolences to his family, fiancée, and friends,” White House press secretary Sarah Huckabee Sanders said in a statement.

Trump, who has been under scrutiny for his financial ties to the kingdom, said on Thursday that there would be “very severe” consequences if Saudi Arabia was discovered to be responsible.