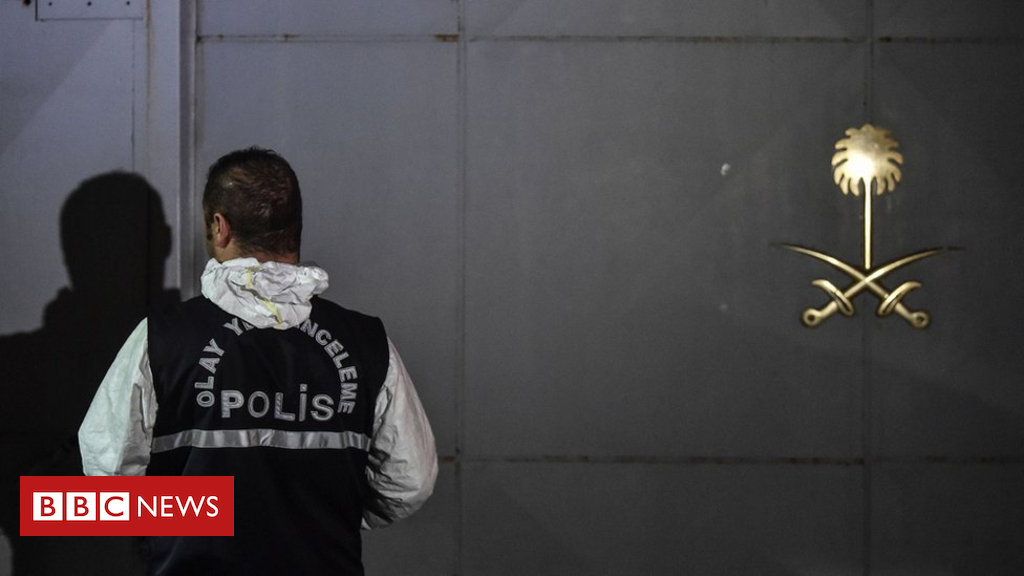 Unnamed Turkish officials say his body may have been disposed of in a nearby forest or on farmland.

Mr Khashoggi disappeared after entering the Saudi consulate in Istanbul on 2 October, where Turkish officials allege he was murdered.

Saudi Arabia denies any knowledge of what happened to him.

Samples taken from the Saudi consulate and the consul’s residence during searches this week are being tested for a match with Mr Khashoggi’s DNA.

Separately on Thursday, a senior Turkish official told ABC News that US Foreign Secretary Mike Pompeo had listened to an audio recording of the alleged journalist’s killing, but this was later denied by State Department spokeswoman Heather Nauert.

Turkey has previously said it has audio and video evidence of Mr Khashoggi’s murder, but these have not been made public.

The incident has caused considerable strain between Riyadh and its Western allies, with US Treasury Secretary Steven Mnuchin and UK International Trade Secretary Liam Fox becoming the latest senior figures to pull out of a major investment conference in Riyadh next week.

The summit is being hosted by Saudi Crown Prince Mohamed bin Salman to promote his reform agenda.

However, a number of major businesses – including Pepsi and EDF – are still intending to go despite growing pressure for a boycott.

What happened to Jamal Khashoggi?

It is not clear. Mr Khashoggi was last seen entering the Saudi consulate in Istanbul on 2 October, to pick up paperwork that would allow him to marry his fiancée Hatice Cengiz.

Turkish officials believe Mr Khashoggi was killed by a team of Saudi agents inside the consulate, and his body then removed.

Saudi Arabia has denied the claims, and initially insisted Mr Khashoggi had freely left the embassy.

Is there any evidence?

Turkish media with close links to the government have published gruesome details on the alleged audio recording, saying screams, and the voice of the consul, Mohammed al-Otaibi, could be heard in the recording.

The Yeni Safak newspaper, which is close to the government, quotes him as telling alleged Saudi agents sent to Istanbul: “Do this outside. You’re going to get me in trouble.”

Meanwhile, Turkish media say they have identified a 15-member team of suspected Saudi agents who flew into and out of Istanbul on the day of the disappearance.

However, Saudi Arabia says reports on Mr Khashoggi’s death are “completely false and baseless” and that it is “open to co-operation” to find out what happened.

Several high-profile human rights groups have demanded that Turkey ask the UN to investigate the possible killing of Mr Khashoggi.

On Wednesday and Thursday, Turkish investigators spent almost nine hours searching the Saudi consul’s residence, before moving on to the consulate itself about 200m (650ft) away, according to Reuters news agency.

Several vehicles with Saudi diplomatic number plates were filmed by CCTV cameras moving from the consulate to the residence just under two hours after Mr Khashoggi entered the consulate.

How have other countries reacted?

Saudi Arabia is a key ally to many Western countries, especially the US. As one of the world’s biggest oil exporters, it has significant influence on the world stage.

The Dutch and French finance ministers, and the head of the International Monetary Fund, are amongst those now boycotting the summit.

He said there would be “very severe” consequences if Saudi Arabia was proved to have killed the journalist.

However, Mr Trump has also been accused of providing cover to the Saudi government.

Russian President Vladimir Putin has said it is a pity that Mr Khashoggi has gone missing, but that Russia cannot damage relations with Saudi Arabia without hard facts.

Who is Jamal Khashoggi?

Mr Khashoggi is a prominent journalist who has covered major stories for various Saudi news organisations.

He served as an adviser to top Saudi officials, but later fell out of favour with the government.

He went into self-imposed exile in the US last year, and wrote a monthly column in the Washington Post.

On Thursday, the Washington Post published Mr Khashoggi’s latest column – a call for press freedom across the Arab world.

Read more: What we know about Saudi journalist’s disappearance