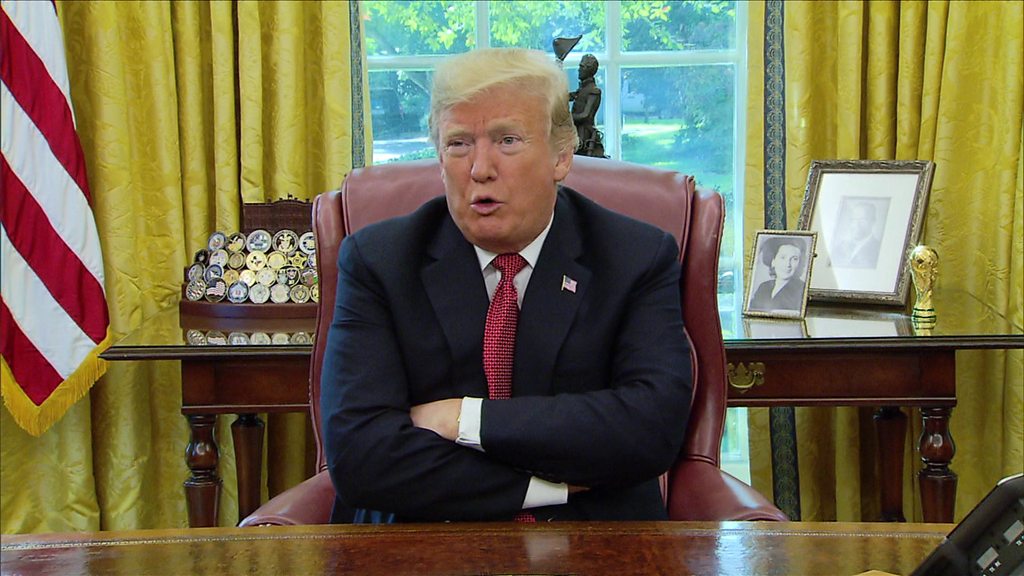 The US has asked Turkey for a recording said to provide strong evidence that Saudi journalist Jamal Khashoggi was killed at Istanbul’s Saudi consulate.

“We have asked for it, if it exists,” President Donald Trump told reporters at the White House.

Mr Khashoggi has not been seen since entering the building on 2 October. Saudi Arabia denies killing him.

Meanwhile, the Washington Post has published the last column Mr Khashoggi wrote before his disappearance.

In the column he talks about the importance of a free press in the Middle East.

The newspaper’s Global Opinions editor Karen Attiah said its release had been delayed in the hope that Mr Khashoggi would return safely.

“Now I have to accept: That is not going to happen. This is the last piece of his I will edit for The Post,” she wrote. “This column perfectly captures his commitment and passion for freedom in the Arab world. A freedom he apparently gave his life for.”

What did the last column say?

Mr Khashoggi presented a strong criticism of the state of press freedoms in the Arab world: “The Arab world is facing its own version of an Iron Curtain, imposed not by external actors but through domestic forces vying for power.

“The Arab world needs a modern version of the old transnational media so citizens can be informed about global events. More important, we need to provide a platform for Arab voices.”

He mentioned the case of his fellow Saudi writer, Saleh al-Shehi, who he said “is now serving an unwarranted five-year prison sentence for supposed comments contrary to the Saudi establishment”.

“Such actions no longer carry the consequence of a backlash from the international community,” he wrote. “Instead, these actions may trigger condemnation quickly followed by silence.”

What is Trump’s latest position?

Saudi Arabia is one of Washington’s closest allies and the Khashoggi disappearance is putting the administration in an awkward position.

Confirming that the tape said to provide evidence of the killing had been requested, Mr Trump added: “I’m not sure yet that it exists, probably does, possibly does.”

Mr Trump said he expected a report from Secretary of State Mike Pompeo who has just been to Saudi Arabia and Turkey.

The president said the truth would come out “by the end of the week”.

He rejected suggestions he was trying to provide cover for Saudi Arabia: “No, not at all, I just want to find out what’s happening.”

Over the past few days, Mr Trump has raised the possibility of “rogue killers” being behind the journalist’s disappearance. And he has cautioned against rushing to blame Saudi leaders, telling the Associated Press news agency that they were being treated as “guilty until proven innocent”.

What is reported to be on the recording?

The existence of audio evidence that Mr Khashoggi – a critic of Saudi leaders – was murdered was revealed by Turkish investigators early on in their inquiries.

Reports in Turkish media give gruesome details of what are said to be his final minutes.

A Turkish newspaper says the consul himself, Mohammed al-Otaibi, can be heard in the audio recording of Mr Khashoggi’s death.

Yeni Safak, which is close to the government, quotes him as telling alleged Saudi agents sent to Istanbul: “Do this outside. You’re going to get me in trouble.”

Mr Otaibi flew back to Riyadh on Tuesday.

How is Turkey’s investigation progressing?

On Wednesday and into Thursday, investigators spent almost nine hours searching the Saudi consul’s residence, then moving on to the consulate itself about 200m (650ft) away, according to Reuters news agency.

The team included prosecutors and forensics experts in white overalls.

Several vehicles with Saudi diplomatic number plates were filmed by CCTV cameras moving from the consulate to the residence just less than two hours after Mr Khashoggi entered the consulate on the day he vanished.

The consulate building was searched for the first time on Monday.

On Tuesday, Mr Pompeo was in Riyadh for talks with Saudi Arabia’s King Salman and Crown Prince Mohammed bin Salman, who he said “strongly denied” any involvement in the journalist’s disappearance.

The events of 2 October

Mr Khashoggi is a US resident and columnist for the Washington Post newspaper who went into self-imposed exile last year after reportedly being warned by Saudi officials to stop criticising the crown prince’s policies.

He arrived at the consulate at 13:14 local time for an appointment to obtain paperwork so he could marry his Turkish fiancée.

Saudi officials have insisted Mr Khashoggi left the consulate soon afterwards and came to no harm.

But Turkish officials believe an assault and struggle took place in the building.

They allege that Mr Khashoggi was killed by a team of Saudi agents who were pictured entering and leaving Turkey on CCTV footage released to media outlets.

The New York Times reports that four of the 15 agents have links to Crown Prince Mohammed, while another is a senior figure in the country’s interior ministry.

On Tuesday, G7 foreign ministers called for Saudi Arabia to conduct a “transparent” investigation into the issue.