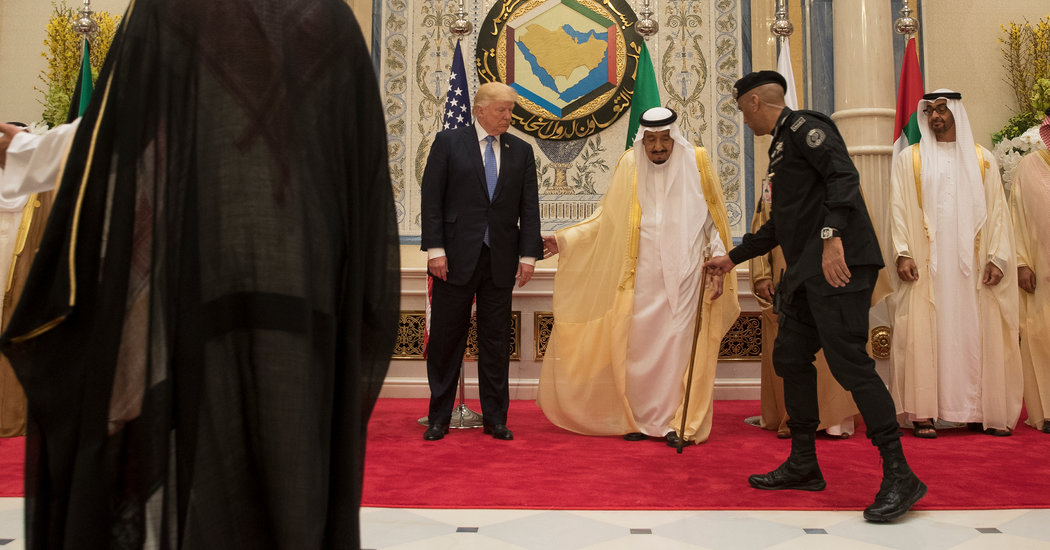 WASHINGTON — Saudi Arabia was preparing an alternative explanation of the fate of a dissident journalist on Monday, saying he died at the Saudi Consulate in Istanbul two weeks ago in an interrogation gone wrong, according to a person familiar with the kingdom’s plans. In Washington, President Trump echoed the possibility that Jamal Khashoggi was the victim of “rogue killers.”

The shifting story line defied earlier details that have emerged in the case, including signs that he was murdered and dismembered. Among other things, Turkish officials have said, an autopsy specialist carrying a bone saw was among 15 Saudi operatives who flew in and out of Istanbul the day Mr. Khashoggi disappeared.

The new explanation, whatever its truth, seemed intended to ease the political crisis that Mr. Khashoggi’s disappearance has created for Saudi Arabia. The new story could also defuse some criticism of the Trump administration, which has refused to back down from billions of dollars in weapons sales to the kingdom and as of Monday was still planning to attend a glittering Saudi investment forum next week.

And it could help Turkey, where a shaky economy would benefit from a financial infusion that low-interest loans from Riyadh could provide.

But the theory was widely dismissed among Mr. Khashoggi’s friends, human rights advocates and some on Capitol Hill, who noted that Saudi officials had denied his death for two weeks — including assertions by Crown Prince Mohammed bin Salman last week and the king himself on Monday.

“Been hearing the ridiculous ‘rogue killers’ theory was where the Saudis would go with this,” Senator Christopher S. Murphy, Democrat of Connecticut, wrote in a Twitter post. “Absolutely extraordinary they were able to enlist the President of the United States as their PR agent to float it.”

Mr. Trump spoke with King Salman of Saudi Arabia on Monday morning in a 20-minute phone call. The president said the king denied any knowledge of what had happened to Mr. Khashoggi, a columnist for The Washington Post who had been critical of the crown prince.

“It sounded to me like maybe these could have been rogue killers — who knows,” Mr. Trump said, speaking to reporters as he headed to visit areas in Georgia and Florida that were ravaged by Hurricane Michael.

Mr. Trump also said he told the king: “The world is watching. The world is talking, and this is very important to get to the bottom of it.” The Saudi state news service reported a different take on the conversation, in which Mr. Trump praised the cooperation between the Saudis and Turkish officials as they investigate Mr. Khashoggi’s disappearance.

Turkish officials have said Mr. Khashoggi was killed and dismembered after he disappeared in the Saudi Consulate in Istanbul two weeks ago.

Later on Monday, a person familiar with the Saudi government’s plans said that Mr. Khashoggi was mistakenly killed during an interrogation ordered by a Saudi intelligence official who was a friend of the crown prince. The person, who spoke on condition of anonymity, said Prince Mohammed had approved interrogating or even forcing Mr. Khashoggi to return to Saudi Arabia under duress.

But, the person said, the Saudi intelligence official went too far in eagerly seeking to prove himself in secretive operations, then sought to cover up the botched job.

Azzam Tamimi, an Islamist friend of Mr. Khashoggi, called the “rogue” theory “disastrous” for the credibility of President Recep Tayyip Erdogan of Turkey.

“The Turks have leaked so much that it is inconceivable that they would settle for less than telling the world exactly what happened,” said Mr. Tamimi, who met Mr. Khashoggi for lunch in London the day before he disappeared.

Mr. Trump dispatched Secretary of State Mike Pompeo to Riyadh on Monday to meet with King Salman. “Determining what happened to Jamal Khashoggi is something of great importance to the president,” said Heather Nauert, the State Department spokeswoman.

The Saudi ambassador to the United States, Prince Khalid bin Salman, left Washington last week, returned to Riyadh and will not be returning, a current and a former American official said on Monday. It was not clear when he might be replaced, or by whom. Prince Khalid is the crown prince’s younger brother.

The Saudi Embassy in Washington also canceled its National Day party, which was scheduled for Oct. 18.

Washington’s clubby diplomatic and lobbying worlds have been rived by the Khashoggi case. On Monday, the Glover Park Group, which had a $150,000-per-month contract to represent the Saudi government, and the BGR Group, with an $80,000-per-month contract, both ended the relationships, according to people familiar with the situations. Their actions followed a similar move by the Harbour Group last week.

Advisors close to Prince Mohammed said he was shocked by the universal condemnation after Mr. Khashoggi’s disappearance.

That has firmed up a growing belief in Western circles that the prince who fueled a war in Yemen to the point of humanitarian disaster, imposed an intemperate blockade against Qatar, arrested a clutch of Saudi elites for money and took two weeks to come up with a passable explanation for Mr. Khashoggi’s fate is not ready for the throne.

“Many in Washington have reached the conclusion that this is a guy we can’t do business with,” said Gerald M. Feierstein, the director for government relations, policy and programs at the Middle East Institute, a nonpartisan think tank, and a former United States ambassador to Yemen.

The Saudi energy minister circulated a statement on Monday reminding Washington journalists that the kingdom had long served as the world’s energy “shock absorber.” He asked that “the global community of nations will respect and acknowledge what Saudi Arabia has done.”

Within five days of Mr. Khashoggi’s disappearance on Oct. 2, Turkish security officials claimed anonymously that they had obtained evidence that the journalist was killed inside the consulate. The evidence never surfaced, however, and the claims stopped after a sudden increase in high-level diplomatic contacts between Turkey and Saudi Arabia.

That frustrated American intelligence and diplomatic officials, who worried that the Turks were citing the evidence as leverage to get loans from the Saudis.

American intelligence agencies had previously intercepted communications of Saudi officials discussing a plan to draw Mr. Khashoggi back to Saudi Arabia from his home in exile in the Washington area and then detain him, a former senior American official said last week. Those intercepts were shared with senators in classified materials last week, making it impossible to suppress them.

It is highly unlikely an attempted rendition of Mr. Khashoggi could have been carried out without the knowledge of Saudi rulers.

For the Trump administration, Mr. Khashoggi’s case risks top foreign policy priorities. Mr. Trump has repeatedly said he does not want to risk what he claims is $110 billion in arms sales to the Saudis. And ensuring Riyadh’s willingness to increase oil production so that coming sanctions on Iranian oil do not lead to a surge in gas prices has been at least as important.

Mr. Trump previously said the episode would not have an effect on American relations with Saudi Arabia, a close ally in the Middle East. But Mr. Trump was already facing pressure from some in Congress to respond to the Saudis with economic sanctions.

The United States’ relationship with the Saudis has always been something of a delicate balance, weighing economic considerations such as oil and arms sales with the kingdom’s record on human rights.

A version of this article appears in print on
of the New York edition
with the headline:
In Shift, Saudi Arabia Plans to Acknowledge Murder of Journalist
. Order Reprints | Today’s Paper | Subscribe