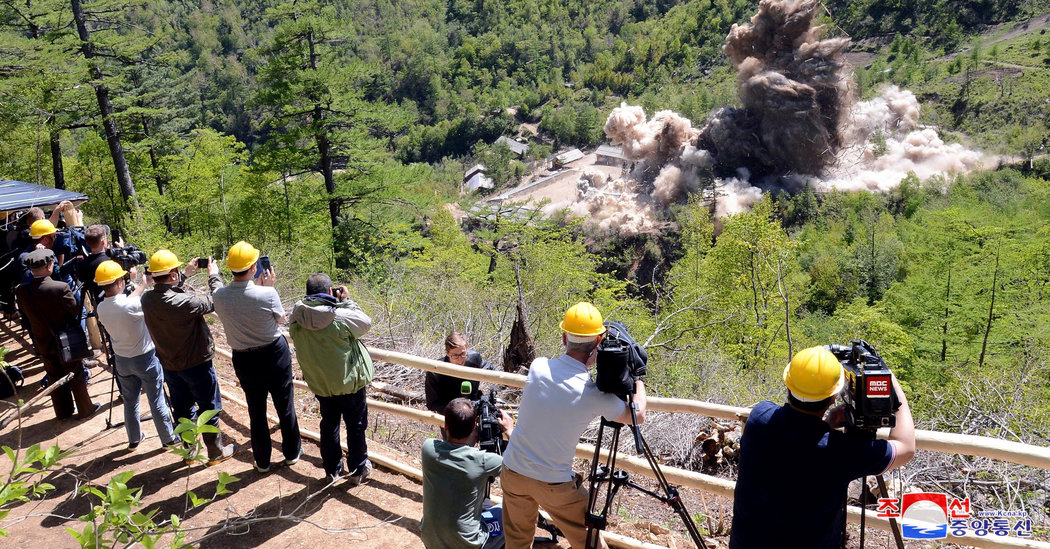 WASHINGTON — President Trump declared Wednesday that North Korea is “no longer a nuclear threat” to the United States even though the two sides had yet to forge a concrete disarmament plan and offered incomplete accounts of what they agreed to during this week’s summit meeting in Singapore.

Rejoicing in the glow of a historic encounter, Mr. Trump returned to Washington and portrayed his agreement with Kim Jong-un, the North Korean leader, as a signal achievement that meant that the outcast state was no longer the United States’ most dangerous problem. But the path to disarmament remained no clearer a day after the meeting.

North Korea’s state-controlled news media described a step-by-step process to dismantle its nuclear weapons, with the United States rewarding it at each stage, something Mr. Trump has seemed to reject in the past. Mr. Trump’s team insisted that North Korea had agreed to an intrusive inspection regime even though Pyongyang made no mention of that.

The confusion stemmed from a joint statement that was long on lofty language and short on specifics. Signed Tuesday with a flourish by Mr. Trump and Mr. Kim, the statement offered more aspiration than action, clocking in at only 391 words.

Mr. Trump was hardly sweating the details, however, convinced that his meeting with Mr. Kim, the first between leaders of their two countries, had transformed the relationship and ended an era of hostility and mutual threats of destruction.

“Just landed – a long trip, but everybody can now feel much safer than the day I took office,” he wrote on Twitter. “There is no longer a Nuclear Threat from North Korea.”

“Before taking office people were assuming that we were going to War with North Korea,” he added. “President Obama said that North Korea was our biggest and most dangerous problem. No longer – sleep well tonight!”

He made his claims even though North Korea has not given up any of its nuclear warheads or missiles, nor dismantled any of its 141 known sites devoted to the production or use of weapons of mass destruction other than blowing up a test site. Mr. Trump’s assertion drew derision from critics who accused him of getting way ahead of a long, arduous negotiation to translate the gauzy words of Singapore into a workable plan.

“What planet is the president on?” asked Senator Chuck Schumer of New York, the Democratic minority leader. “Saying it doesn’t make it so. North Korea still has nuclear weapons. It still has ICBMs. It still has the United States in danger. Somehow President Trump thinks when he says something it becomes reality. If it were only that easy, only that simple.”

Mr. Trump demonstrated his deference to North Korea in an interview taped before he left Singapore and aired on Fox News on Wednesday night. When Mr. Kim’s record of ordering the deaths of members of his own family and presiding over one of the most repressive states in the world was mentioned, Mr. Trump said, “Yeah but so have a lot of other people, done some really bad things. I mean, I could go through a lot of nations where a lot of bad things were done.”

He also expressed willingness to withdraw American troops stationed in South Korea since the end of the Korean War 65 years ago, a longtime goal of the North’s. While Mr. Trump said it was not currently on the table in their negotiations, he wanted to do it for his own reasons. “I would love to get the military out as soon as we can because it costs a lot of money,” he said.

If the talks in Singapore provided Mr. Trump an opportunity to show statesmanship on a grand scale, they did no less for Mr. Kim, whose country has long sought such a meeting with an American president. The state-run newspaper Rodong Sinmun plastered the pages of its Wednesday edition with color photographs of Mr. Kim and Mr. Trump talking, walking and smiling, apparently as equals, with the flags of the two countries arranged side by side as a backdrop.

“The critical question is what comes next?” said Kelsey Davenport, the nonproliferation policy director at the Washington-based Arms Control Association. “The true test of success is whether the follow-on negotiations can close the gap between the United States and North Korea on the definition of denuclearization and lay out specific, verifiable steps that Pyongyang will take to reduce the threat posed by its nuclear weapons.”

Secretary of State Mike Pompeo, who traveled to Seoul to brief South Korean officials, said the next step in negotiations had not been decided, but added that he expected to “begin the engagement” with North Korea within the next week.

Speaking with reporters, he said that the Trump administration hoped to complete the “major disarmament” of North Korea within the next 2½ years without defining what that would entail. Some nuclear experts have said completely unwinding North Korea’s nuclear program could take 10 to 15 years, although some foreign policy analysts said the two sides could accomplish enough by the end of Mr. Trump’s term in office to demonstrate a serious effort.

“Most certainly in the president’s first term,” Mr. Pompeo said in describing the administration’s goal. “You used the term ‘major disarmament,’ something like that? Yes, we’re hopeful that we can achieve that in the next, what is it, two and a half years, something like that.”

Mr. Pompeo insisted that the general wording of the statement committed North Korea to an international inspection regime to confirm its “complete denuclearization.” The statement itself, however, did not use the words “verifiable” or “irreversible” that had been part of the mantra of American officials leading up to Singapore.

“Let me assure you that the ‘complete’ encompasses ‘verifiable’ in the minds of everyone concerned,” Mr. Pompeo said. “One can’t completely denuclearize without validating, authenticating — you pick the word.”

When a reporter pressed for more details about how it would be verified, Mr. Pompeo grew testy. “I find that question insulting and ridiculous and, frankly, ludicrous,” he said.

Other questions that remained unanswered included what limits North Korea would accept on missiles, what North Korea would do to address Japan’s concerns about its abducted citizens and what assurances would Pyongyang make in terms of not helping other states build nuclear facilities as it did with Syria.

Bruce Klingner, a Korea expert at the Heritage Foundation and a former C.I.A. analyst, said the joint statement signed in Singapore did not even commit North Korea to do as much as it promised in deals negotiated in 1994 and 2005 that it later failed to live up to.

“It’s weaker than its predecessors,” he said. “It’s a first step, but it’s a stumble more than a step. It’s not worth the hype that’s being accrued to it.”

To some, including President Moon Jae-in of South Korea, the Singapore meeting was a success despite unanswered questions. Mr. Moon and others saw it as the clearest signal yet that the two countries were walking away from the brink of war and willing to take bold steps to end decades of acrimony.

On Wednesday, Mr. Moon appeared to accept Mr. Trump’s decision to suspend joint military exercises. “While North Korea and the United States are engaged in sincere talks on denuclearization and relations-building, we recognize the need to find various options to smooth such dialogue,” said a spokesman, Kim Eui-kyeom.

While Mr. Trump has said the denuclearization process should happen “very quickly,” the North Korean agency said the two leaders agreed to a phased process in which Pyongyang would bargain away its arsenal in stages, securing reciprocal actions from the United States at each step.

“Kim Jong-un and Trump had the shared recognition to the effect that it is important to abide by the principle of step-by-step and simultaneous action in achieving peace, stability and denuclearization of the Korean Peninsula,” the agency said.

Mr. Pompeo declined to discuss the North Korean report. “I’m going to leave the content of our discussions as between the two parties, but one should heavily discount some things that are written in other places,” he said.

Vice President Mike Pence seemed to contradict the North Korean version. “As the president said, our sanctions will remain in place until North Korea’s nuclear weapons are no longer a factor,” he said at the annual meeting of the Southern Baptist Convention in Dallas. “We will not repeat the mistakes of the past.”

Peter Baker reported from Washington, and Choe Sang-hun from Seoul.

A version of this article appears in print on
, on Page
A
1
of the New York edition
with the headline:
President Claims His Talks Ended Nuclear Threat
. Order Reprints | Today’s Paper | Subscribe