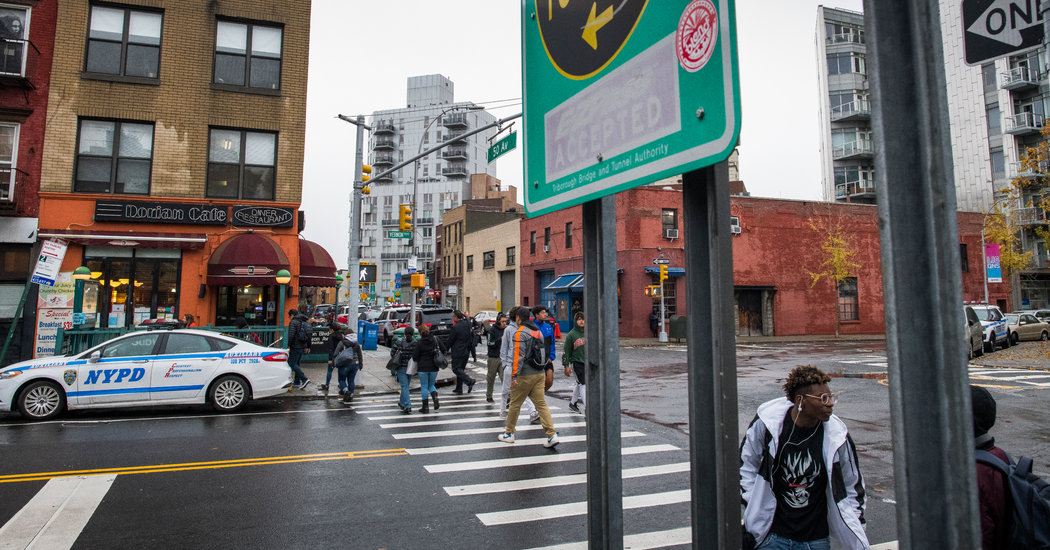 There are wine bars and a cycling studio along the riverfront in Long Island City, among gleaming high-rise apartment buildings with views of Midtown Manhattan. The soon-to-open library branch is a modern art cube of concrete, the median income is $138,000 a year, and America’s hottest online retailer is about to move in.

In the eyes of the federal government, the census tract that will house Amazon’s new headquarters in New York is an “opportunity zone,” eligible for tax credits meant to spur investment in low-income communities.

The retail giant said Tuesday that it had selected this upscale slice of Long Island City to house one of two new secondary headquarters. The decision was based on a host of factors, including state tax incentives and, in Amazon’s words, the ability to attract top talent. But the choice could give eager developers — who almost certainly would have flocked to the area anyway — a tax benefit conveyed by a provision in the $1.5 trillion tax overhaul that President Trump signed last year.

That tax break was pitched as a benefit for distressed communities. But critics fear it could primarily help wealthy investors and speed gentrification in parts of the United States that were already likely to draw investment.

Opportunity zones have been championed for several years by Republicans and Democrats in Congress, and they were added to the tax law by Senator Tim Scott, a South Carolina Republican. The zones allow investors who comply with regulations still being worked out by the Treasury Department to reduce their tax burden with preferential treatment of capital gains.

Investors who pour unrealized capital gains into funds that invest in real estate or other assets that qualify for opportunity zone status can essentially avoid as much as 15 percent of the taxes they would have owed on their investment gains. If they hold an investment in an opportunity zone for more than a decade, they avoid all taxes on any gains that the investment produces.

Amazon itself could benefit from the designation: It could start an opportunity fund to buy real estate in the zones surrounding the office, for example. But experts say the bigger windfall will flow to the people who already own land in the zone or other zones nearby, and to the investors who will race in to build and open businesses in the area. There are already signs of a mad dash for land in the area.

New York gave Amazon up to $1.7 billion in state economic incentives to help secure its location in Queens. The agreement between the company and city and state officials does not mention the opportunity zone designation. Spokesmen for Amazon and the State of New York, which designated the waterfront tract of Long Island City as an opportunity zone this year, did not respond to requests for comment about the designation and how or whether it might have been a factor in the company’s decision about where to locate.

The vast majority of opportunity zones nationwide sit in areas of high poverty and low income, in struggling cities like Stockton, Calif. Other impoverished corners of Long Island City were also selected for zone status, including the census tract that is home to Queensbridge Houses, the nation’s largest public housing project, where the poverty rate is near 50 percent and the median income below $20,000 a year.

The waterfront Long Island City zone, in contrast, embodies what critics have worried might happen when place-based tax benefits extend to investment in areas that most Americans would not consider impoverished.

“The opportunity zone program is not very targeted to deeply distressed areas,” the Brookings Institution researchers Hilary Gelfond and Adam Looney wrote in a recent study. “States had too much flexibility and their incentives were not aligned with Congress’s goals for the program.”

The program’s architects say that there are few tracts nationwide like the ones surrounding Amazon’s new home, and that Long Island City will not divert investment from more distressed areas that lack a new high-tech tenant.

“It’s not just that the Long Island City tract is an outlier,” said John Lettieri, president of the Economic Innovation Group, a Washington think tank that helped advocate the creation of opportunity zones. “It’s the fact that Amazon, and this HQ2 thing, is an outlier. I don’t think those are the cases that are going to define the national experience for opportunity zones.”

The zones are meant to draw investment to economically struggling areas that lack access to capital. Wealthy investors are rushing to set up funds to plow money into those areas, in order to take advantage of incentives that include potentially large reductions in capital gains taxes for investments that are held in a zone for a decade or more.

State governors selected the zones from a list of eligible census tracts, based on a formula used to calculate eligibility for another federal effort to aid struggling areas, the longstanding New Markets Tax Credit. Governors were allowed to designate one-quarter of eligible areas as opportunity zones. Their designations were approved by the Treasury Department.

Most of the zones are in areas that have fallen behind economically, despite robust growth across the American economy. Ms. Gelfond and Mr. Looney calculated that the average poverty rate in a designated zone was 29 percent in 2016, nearly twice the national average. The zones are more heavily disadvantaged than the eligible areas that governors did not select, they found, and generally target areas where economic mobility is low. In other words, states did largely select areas that were truly in need of investment and economic help.

But the relatively broad criteria allowed governors to choose some low-poverty, higher-income, rapidly developing areas adjacent to low-income zones. They constitute about 200 of the nearly 8,800 zones that Treasury approved, including the waterfront area that Amazon has chosen in Long Island City.

Brookings estimated that 11 percent of the final opportunity zones have lower poverty rates than the national average. A third of the zones in Washington, D.C., for instance, are already gentrifying quickly, according to estimates by the Urban Institute. Among the states, New York has the highest share of gentrifying areas, with 13 percent of its zones in areas that are beginning to prosper.

Areas like Long Island City “are already getting a lot of capital,” said Brett Theodos, a principal research associate in the Metropolitan Housing and Communities Policy Center at the Urban Institute. “This use case was allowed from the beginning. Whether that’s a good use of public subsidies is another question.”

After Mr. Trump’s tax cut passed, Mr. Theodos developed a ranking system of sorts to help states steer their designations toward areas that most needed the help. The system assigns each eligible tract in every state an “investment score,” which measures commercial, small-business and housing lending activity on a scale of 1 to 10 based on the need for investment. It also attaches “socioeconomic change flags” to areas that appear to be gentrifying, based on recent upswings in median income, housing costs and the share of residents who have college degrees or are white.

The riverfront tract in Long Island City scored a 9 on that investment scale, and was flagged for gentrification.