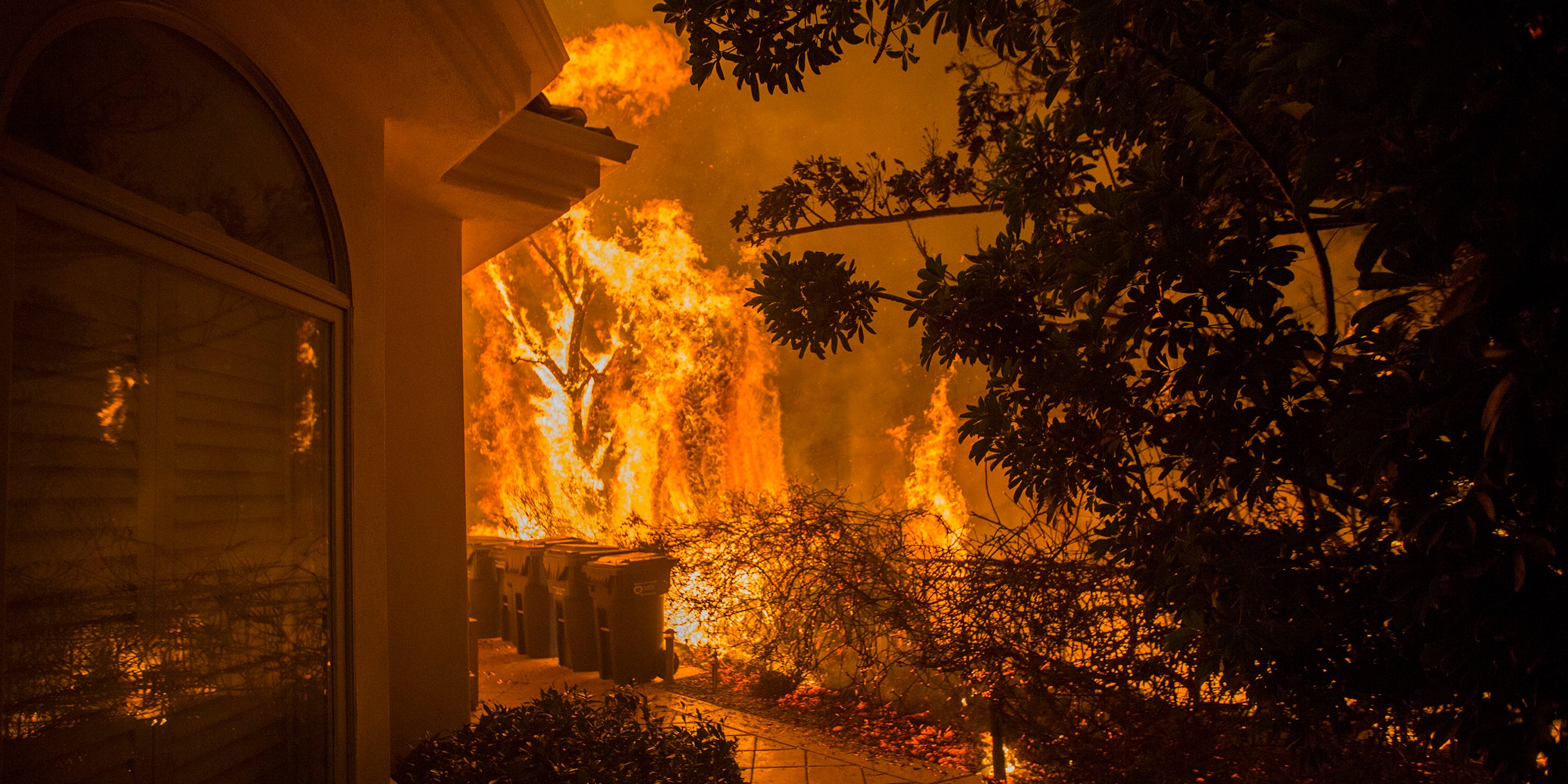 The Camp Fire, in northern California, started Thursday morning and quickly charred the entire town of Paradise, which is home to 27,000. The flames grew so fast — a pace of 80 football fields per minute— that four people were burned to death in their cars, the Butte County sheriff Korey Honea told the Associated Press. One deceased person was found near a vehicle.

According to the sheriff, the department has received 35 missing persons reports. So far, at least nine people have died as a result of the Camp Fire. In addition to those found in or near a vehicle, one person was found inside a home.

More than 6,700 structures were destroyed. It is now considered the most destructive wildfire in California history in terms of the number of structures destroyed.

To the south, on the outskirts of Los Angeles, two smaller fires also started Thursday and are now creating havoc for drivers and forcing homeowners to flee. The Woolsey and Hill Fires are burning through parts of Ventura and LA counties. The flames have threatened the homes of celebrities such as Kim Kardashian and shut down stretches of the 101 freeway.

Inside the city limits of LA, another smaller fire broke out Friday morning in Griffith Park near the zoo. Firefighters there are scrambling to reach the area by helicopter, since it’s not accessible by truck.

Southern California fire officials say the flames have burned at least 150 homes. They say that number is likely to increase.

Already this year, 7,578 fires have burned across California, fueled by hot, dry conditions and aggressive winds.

The Camp Fire started about 6:30 a.m. on Thursday. So far, more than 6,700 structures have burned and thousands more are threatened.

According to the Butte County sheriff’s office, five of the people whose deaths have been confirmed were found near Edgewood Lane in Paradise, California, in or near “vehicles that were overcome by the Camp Fire.” The sheriff’s office was not yet able to identify those victims because of their burn injuries. Other residents ran from the fire, the Sacramento Bee reported.

A sign is posted on the Paradise Skilled Nursing center as it is consumed by flames from the Camp Fire on Thursday in Paradise. Justin Sullivan/Getty Images

California Acting Gov. Gavin Newsom declared a state of emergency in Butte County because of the Camp Fire Thursday, and sent a letter to President Donald Trump and the Federal Emergency Management Agency (FEMA) asking for federal assistance.

Smoke from that fire is blanketing wide swaths of Northern California in a gray haze. On Friday morning, people in San Francisco woke up to the smell of smoke and poor air quality, and some donned masks to protect their lungs.

Federal air monitors have suggested that older adults, children, teens, and people with heart and lung conditions should limit their time outside because of the high number of dangerously small pollutants in the air. The air in San Francisco right now is as bad as Beijing, CBS reported.

So far, the Hill Fire has burned at least 6,000 acres in Ventura County, and mandatory evacuation orders are in place for people at the Point Mugu Naval Base and California State University Channel Islands, among other areas.

The Woolsey Fire (the one that forced Kim and Kourtney Kardashian out of their homes) has charred 35,000 acres, the AP reported Friday evening, and the LA County Fire Department said the blaze was still 0% contained as of 5:45 p.m. PT on Friday. Mandatory evacuations have been ordered in areas including Malibu, Topanga, and Thousand Oaks (the same city where a mass shooter killed 12 people on Wednesday), the LA Times reported.

Shortly after noon on Friday, the City of Malibu said on its website that the “fire is now burning out of control and heading into populated areas of Malibu. All residents must evacuate immediately.” LA County Sheriff‘s Deputies were knocking on doors there, telling everyone in the star-studded beach town to get out.

You can view the full evacuation orders on the Ventura County Emergency Information site and the LA County Woolsey Fire site.

So far, there are no reported injuries or deaths from either of the Southern California fires. But as a result of the blazes, 250,000 people in Ventura and LA counties had been evacuated as of Friday night, the Times said.

By Friday evening, about 75% of the Ventura County city of Thousand Oaks had been abandoned, fire officials said according to the Associated Press.

Firefighters are racing to keep flames from charring people’s homes, but as the LA Fire Department’s Eric Scott pointed out on Twitter, some houses are better protected than others, since green vegetation can help keep flames back.

On Friday morning, less than 24 hours after the two fires broke out, acting Gov. Newsom declared a state of emergency in Los Angeles and Ventura counties.

Read More: A California wildfire just demolished an entire town and forced the Kardashians to evacuate. Here’s why wildfire season is getting longer and stronger.

The fires have forced the 101 freeway to shut down in a couple different areas. In Ventura County, a nine-mile southbound stretch from Wendy Drive to Lewis Road where the Hill Fire raged, was closed. In LA County, a section of the freeway from the Mulholland Drive/Valley Circle Boulevard exit to Reyes Adobe Road was closed to traffic both ways after flames from the Woolsey Fire jumped across the highway.

Wildfire “season,” in California used to run from late summer through the fall, since autumn’s Santa Ana winds help blow flames around. But as the planet heats up, unseasonably high temperatures and drought conditions are becoming more common. So fire officials in the state are succumbing to the idea that fires may not be limited to any specific season anymore.

This is a developing story. Check back for updates.