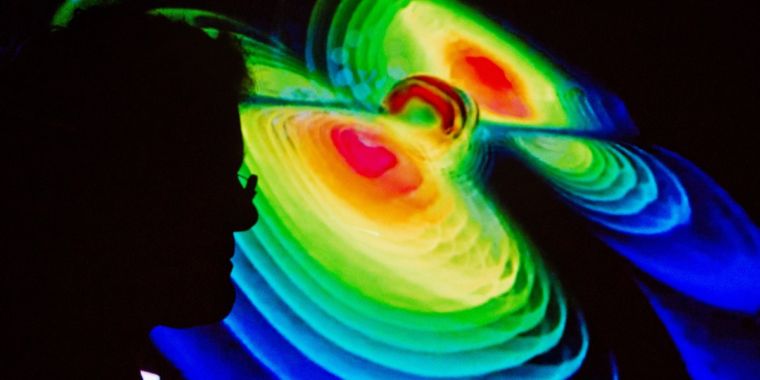 The first direct detection of gravitational waves was announced on February 11, 2016, spawned headlines around the world, snagged the 2017 Nobel Prize in Physics, and officially launched a new era of so-called “multi-messenger” astronomy. But a team of physicists at the Niels Bohr Institute in Copenhagen, Denmark, is calling that detection into question based on its own independent data analysis conducted over the last two-and-a-half years.

As New Scientist reports, the group thinks that the original gravitational wave signal detected by the Laser Interferometer Gravitational-Wave Observatory (LIGO) was an “illusion.” The researchers allege that the collaboration mistook patterns in the noise for a signal. The magazine oddly touts this as an “exclusive,” but group spokesperson Andrew Jackson has been banging this particular drum for a while now, after first experiencing misgivings about LIGO’s analysis as presented during the February 11, 2016 press conference in Washington, DC. The group’s original paper was published in the Journal of Cosmology and Astroparticle Physics in August of that year, and there has been considerable back and forth within the physics community about Jackson’s claims since then.

“Andrew Jackson and his group have been saying for the past few years that LIGO’s detections are not real,” says LIGO executive director David Reitze of Caltech. “Their analysis has been looked at by many people who have all concluded there is absolutely no validity to their claims.” Reitze characterized the New Scientist article as “very biased and sensational.”

“Nothing they’ve done gives us any reason to doubt our results.”

LIGO spokesperson David Shoemaker of MIT thinks the controversy all boils down to a misunderstanding about LIGO’s methods for analyzing its data. “[Jackson et al.] came to it skeptically, and I think skepticism in science is a really important thing. You have to question results,” he says. “But these are complicated data; they are not simple to understand. Certainly nothing they’ve done gives us any reason to doubt our results.”

While LIGO has gained a (not entirely undeserved) reputation for excessive secrecy, Shoemaker says the collaboration has spent a great deal of time interacting with Jackson and his group over the last two years to improve their understanding of LIGO’s methods, including extended visits to the Niels Bohr Institute and inviting Jackson et al. to discuss the issue in depth in teleconferences with LIGO team members. So if LIGO’s response whenever that drum begins banging anew sometimes comes off as a bit exasperated, there’s a very good reason for it.

This is a field long riddled with doubts. In the 1960s, physicist Joseph Weber of the University of Maryland designed and built his own detector using resonant bars that he expected would vibrate in response to a gravitational wave. Columbia University physicist Janna Levin described the apparatus in her book, Black Hole Blues, using a guitar string analogy: “A solid aluminum cylinder about 2 meters long, 1 meter in diameter, and in the range of 3,000 pounds, as guitar strings go, isn’t easy to pluck. But it has one natural frequency at which a strong gravitational wave would ring the bar like a tuning fork.” Weber claimed he had detected a signal in 1969. Alas, nobody else could replicate that result, and Weber’s professional reputation never fully recovered.

Then, in 2014, the BICEP2 collaboration—which hunts for telltale signatures of gravitational waves in the cosmic microwave background (the leftover radiation from the Big Bang)—announced it had detected indirect evidence of these ripples in the fabric of spacetime. Much fanfare ensued. Within weeks, however, serious doubts had begun to emerge. Ultimately, it turned out that the BICEP collaboration had mistaken clouds of cosmic dust for a signal.

The blow was crushing. The gravitational-wave community was sufficiently burned by the BICEP2 debacle that LIGO opted for extreme caution and secrecy—ironically a big part of the reason the collaboration is viewed with distrust in some quarters. Its researchers spent several months between the signal detection and the official announcement in February 2016 to double, triple, and quadruple check their analysis to guard against another false detection.

So how could this happen again?

First, it’s highly unlikely that it has happened again. But the answer is that separating signal from noise is very, very difficult in this kind of analysis. The signal is extremely faint (on the order of a billionth of a billionth the diameter of an atom); that’s why you need such sensitive detectors to pick them up at all.

Also, the Universe is actually a pretty noisy place. “The problem isn’t so much the absolute weakness of the waves; the problem is that there are many other disturbances that also wiggle the interferometer,” physicist Sabine Hossenfelder wrote at Forbes back in 2017—the first time Jackson’s false-signal claims were making the rounds.

Quick refresher: LIGO detects gravitational waves via laser interferometry, using high-powered lasers to measure tiny changes in the distance between two objects positioned kilometers apart. (LIGO has detectors in Hanford, Washington, and in Livingston, Louisiana. A third detector in Italy, Advanced VIRGO, came online in 2016.) Each instrument is so sensitive that it also picks up small ambient vibrations, like a rumbling freight train or natural thermal vibrations in the detectors themselves. That is why, as Ars’ own John Timmer pointed out last year, the LIGO collaboration goes to such great lengths to shield its instruments and minimize noise in its data.

On September 14, 2015, at 5:51 AM EST, both detectors picked up signals within milliseconds of each other for the very first time. The waveforms of those signals serve as an audio fingerprint—in this case, evidence for two black holes spiraling inward toward each other and merging in a massive collision event, sending powerful shock waves across spacetime. This is the signal that Jackson’s group most strongly disputes.

Gravitational waves travel at the speed of light, but since the detectors are so far apart, there should be a slight time lag and a small adjustment in amplitude to account for the curvature of the Earth. The signals will be correlated in the data. The noise, however, should not be correlated. The Danish team concluded from its analysis that the noise was correlated at both the Hanford and Livingston detectors, potentially contaminating the data. For Jackson, this called into question LIGO’s ability to sufficiently distinguish between signal and noise and, hence, the validity of the detection itself.

As Hossenfelder explained in 2017:

A correlation in the noise would not affect the individual signals at each of the sites. But in order to achieve a highly significant signal between the detectors, the LIGO collaboration takes into account how both signals are correlated. If this correlation were not reliable, because (for example) there was the possibility that noise correlations contaminated [its] data, the statistical significance of the detection would be reduced. In other words, what appears to be a signal might actually be caused merely by fluctuations.

Hossenfelder expressed some doubt about Jackson’s claim at the time, concluding his group likely must have made a mistake in its analysis. That is certainly LIGO’s stance, then and now.

“The Danish analysis is just wrong,” LIGO data analyst Neil Cornish of Montana State University told New Scientist, adding that Jackson’s group used a simplified analysis and made some very basic mistakes when deciding how to go about analyzing the raw data and accounting for noise.

While Jackson has considerable expertise in signal analysis of large data sets like the CMB, he does not work directly on gravitational waves, which are very different beasts. “They are coming to [LIGO’s data] with a tool set they’ve developed for this other field, the cosmic microwave background radiation,” says Shoemaker. “They are determined to use their concepts and not try to learn from our sometimes bitter, long, and frustrating experience.”

“The analysis done by Jackson et al. looks for residuals after subtracting the best fit waveform from the data,” Reitze says. “Because the subtracted theoretical waveforms are not a perfect reconstruction of the true signal—they never are, since we have a discrete set of waveforms that we use to search the data—[they] find residuals at a very low level and claim that we have instrumental artifacts that we don’t understand. So therefore he believes that we haven’t detected a gravitational wave.”

In other words, Jackson’s team searches for collisions using a limited set of modeled signals. But the actual collisions will produce signals that invariably differ from the modeled ones in some details. And, according to Reitze, LIGO doesn’t use this method to make statistical statements about its confidence in detection.

Perhaps the best argument in favor of the validity of LIGO’s detection is the number of additional detections it has made since then, most notably last year’s binary neutron star merger, supported by a simultaneous gamma-ray burst and signals in the rest of the electromagnetic spectrum. Jackson tries to explain that away, too, but his argument rests on the fact that LIGO initially thought the event was a false alarm since it coincided with a “glitch” (strange short bursts of noise that might be linked to the interferometer hardware). LIGO successfully removed that glitch from its data, but Jackson simply doesn’t trust its analysis.

For all the sound and fury, the Danish group’s position is a minority opinion. Even those physicists who went on the record with New Scientist in support of the Danish team’s analysis still think that, in the end, the LIGO results will hold up. Their emphasis is on the need for independent confirmation of LIGO’s analysis.

On that point, people seem to be in agreement. But Reitze counters that the complete data from that first run is already available online. According to Shoemaker, this includes the relevant time series data and the programs used, but “it’s not a trivial matter to use them.” Caltech even held a training workshop on how to deal with gravitational-wave data. That’s a pretty far cry from asking the physics community to take its analysis on faith, as Jackson claims in the New Scientist article.

And contrary to Jackson’s assertion in the article, a technical paper really is in the works at the LIGO collaboration detailing how its handled the noise in its data—noise just hasn’t been a top priority. Shoemaker concedes this has given LIGO a needed nudge to complete it. “We’ve been careful to write a paper that is not a rebuttal of Jackson et al., since I don’t think that would be very useful for the community,” he says. “Instead, it will be more didactic about the specific points where we see they had difficulties.”