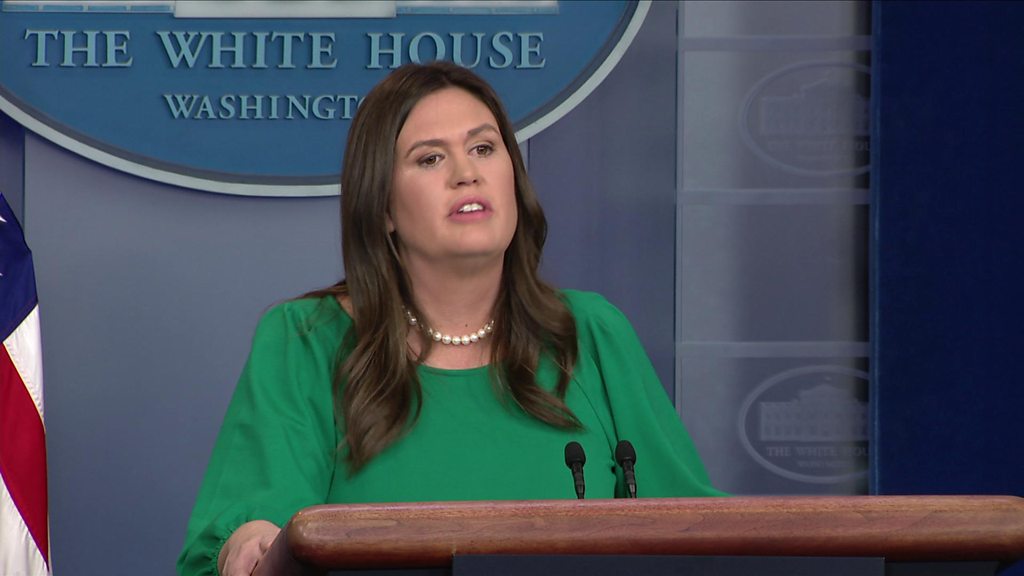 The White House has angrily rejected suggestions President Donald Trump’s rhetoric could be to blame for a mass shooting at a Pittsburgh synagogue.

Press Secretary Sarah Sanders said on Monday it was “outrageous” to suggest that Mr Trump or his language was at all responsible.

She said the president and first lady will visit Pennsylvania on Tuesday, where 11 people died on Saturday.

Suspected gunman Robert Bowers has made his first court appearance in court.

The mass shooting is being called the worst anti-Semitic attack in US history.

“The president is not responsible for these acts,” Mrs Sanders said repeatedly during Monday’s news conference when a reporter put it to her that the president’s rhetoric could play a part in the Pittsburgh attack, or a recent mail bomb scare.

“I think it’s irresponsible to blame the president and members of his administration for those heinous acts.”

Progressive Jewish leaders have called on the president to soften his tone in an open letter that now has nearly 40,000 signatures.

The letter states the president is “not welcome in Pittsburgh” until he fully denounces white nationalism.

Shackled to a wheelchair

Robert Bowers arrived shackled to a wheelchair wearing a blue shirt. His hands were untied to enable him to sign his name.

The hearing lasted only a few minutes to set a date for Thursday when the prosecution will bring evidence.

He was slightly hunched and looked down when addressed by the judge, who asked if he wanted to hear the complaint against him.

His lawyers declined and Mr Bowers was remanded into the custody of the sheriff with no bail. He faces federal murder and assault charges which could carry the death penalty.

He was shot and injured during an exchange of fire with police as he tried to leave the Tree of Life Synagogue, where it is alleged he killed 11 worshippers in America’s worst hate crime against Jews.

The press secretary’s voice cracked with emotion as she spoke of how the president “adores” Jewish Americans.

What happened in court?

During his first court appearance on Monday, Mr Bowers – who was wounded in a gun battle with police during the shooting rampage – waived his detention hearing and has requested a public defender, US media reported.

A team of sharpshooters and police teams with dogs were part of the heavy security presence at the federal courthouse as the 46-year-old truck driver was arraigned.

The alleged gunman spoke very little, only giving his name, acknowledging the charges against him and stating that he could not afford a lawyer.

He faces 29 charges, including obstructing the exercise of religious beliefs resulting in death – a hate crime.

Federal prosecutors are considering seeking the death penalty against the suspect. He is next due for a court hearing on 1 November.

Who are the victims?

Eight men and three women were killed at the Tree of Life synagogue.

They ranged in age from 54 to 97 years old. The worshippers were well-known and devout congregants. Several had attended the synagogue since childhood.

Allegheny County chief medical examiner Dr Karl Williams said two brothers, and a husband and wife are among the dead.

The first funerals will be held, for Cecil and David Rosenthal, on Tuesday.

Pittsburgh shooting: Who were the victims?