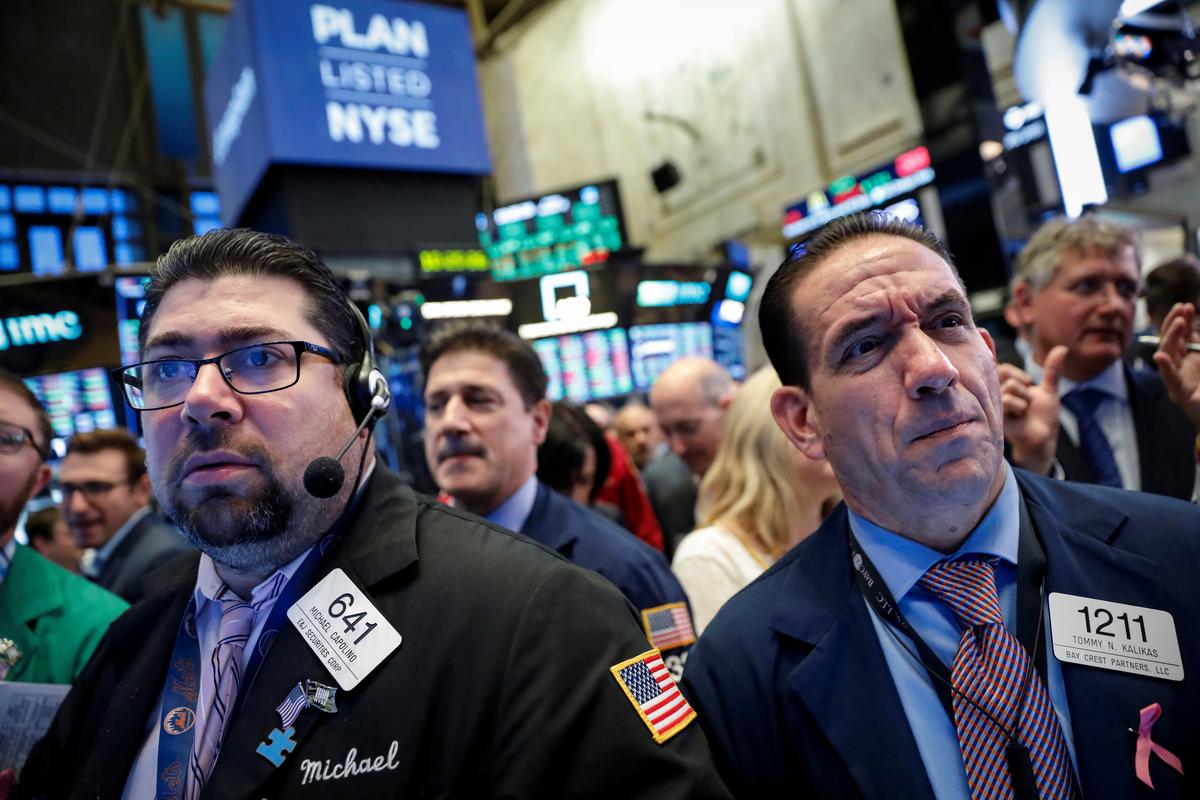 (Reuters) – U.S. stocks fell on Monday as an increase in tensions between Western powers and Saudi Arabia added to worries over rising borrowing costs and the impact of tariffs, following the main three indexes’ biggest weekly declines in over seven months.

Among the biggest drag on the three major indexes was Apple, which fell 1.6 percent after Goldman Sachs said there were multiple signs of rapidly slowing consumer demand in China, which could affect demand for iPhones this fall.

Apple’s drop weighed on technology stocks, which fell 1.34 percent and much like last week, led the market lower. The gainers among the 11 major S&P sectors were led by the defensive utilities, real estate and consumer staples companies.

With the third-quarter earnings season entering high gear this week, Goldman’s warning on weak demand from China would only add to fears about the impact of the U.S.-China trade war on corporate profits.

Also adding to the tensions was U.S. President Donald Trump’s threat of “severe punishment” if it was found journalist Jamal Khashoggi, who disappeared on Oct. 2, was killed in the Saudi consulate in Istanbul. Saudi Arabia has vowed to retaliate to any move to punish the Kingdom.

“And the Saudi situation adds to this volatility.”

FILE PHOTO: Traders work at the post where UnitedHealth Group is traded on the floor of the New York Stock Exchange (NYSE) in New York, U.S., January 31, 2018. REUTERS/Brendan McDermid/File Photo

The clearest picture yet of the impact of the U.S.-China trade war will be the third-quarter earnings season, especially the company forecasts. Profits at S&P companies are expected to have risen 21.5 percent, according to I/B/E/S data from Refinitiv, less than the growth in the past two quarters.

“It’s more about what picture the corporate heads are going to paint instead of the numbers themselves,” said Bakhos.

The S&P 500 retailers index dropped 1.14 percent after data showed U.S. retail sales barely rose in September, as a rebound in motor vehicle purchases was offset by the biggest drop in spending at restaurants and bars in nearly two years.

Sears Holdings plummeted 16.3 percent after the retailer filed for Chapter 11 bankruptcy, throwing into doubt the future of the company which has withered in the age of internet shopping.

Reporting by Medha Singh in Bengaluru; Editing by Shounak Dasgupta