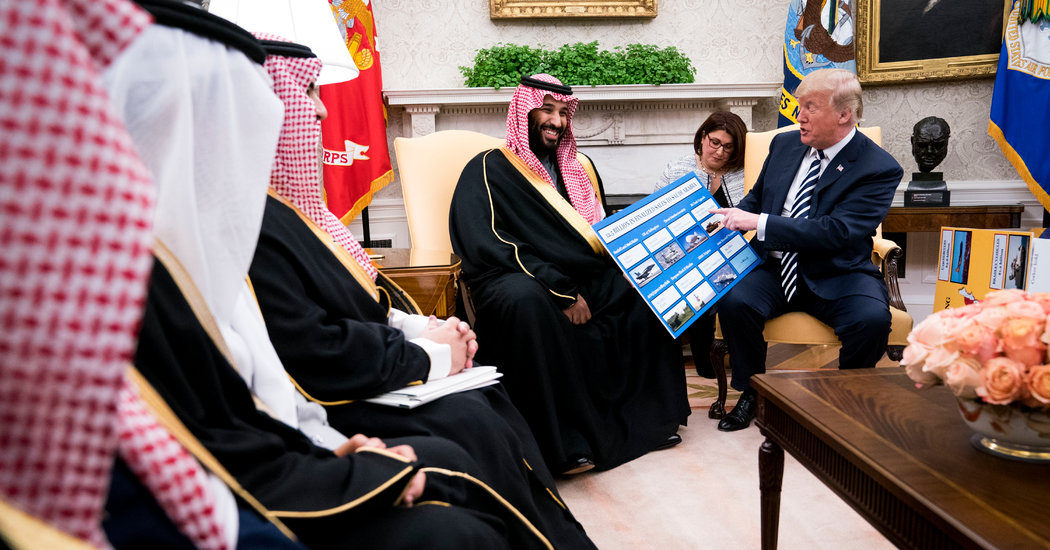 ISTANBUL — The disappearance of the Saudi dissident Jamal Khashoggi is opening a rift between Washington and Saudi Arabia as the kingdom blasted President Trump on Sunday for promising “severe punishment” if the royal court was responsible.

If Saudi Arabia “receives any action, it will respond with greater action,” the Saudi Foreign Ministry said in a statement, citing the oil-rich kingdom’s “influential and vital role in the global economy.”

Saudi Arabia “affirms its total rejection of any threats and attempts to undermine it, whether by threatening to impose economic sanctions, using political pressures, or repeating false accusations,” the Foreign Ministry said.

The “accusations” at issue are the claims of Turkish officials that a team of Saudi agents killed and dismembered Mr. Khashoggi, a United States resident and columnist for The Washington Post who was last seen entering the Saudi Consulate in Istanbul on the afternoon of Oct. 2.

The Saudi crown prince, Mohammed bin Salman, and other Saudi officials have said they have no knowledge of Mr. Khashoggi’s fate.

President Recep Tayyip Erdogan of Turkey has demanded an explanation.

But other Turkish officials, speaking on the condition of anonymity and citing confidential intelligence, have let out a steady stream of leaks detailing what they say was Mr. Khashoggi’s brutal murder at the hands of a 15-member Saudi team sent to Turkey that day on two private jets with the mission to kill him.

Those leaks have contributed to rising pressure from Congress and other Western governments for Saudi Arabia to explain what happened. Although security camera footage shows Mr. Khashoggi entering the consulate, no evidence has emerged that shows him exiting. His fiancée has said she waited outside into the night.

On Sunday, Britain, France and Germany issued a joint statement demanding a “credible investigation to establish the truth about what happened, and — if relevant — to identify those bearing responsibility for the disappearance of Jamal Khashoggi, and ensure that they are held to account.”

The foreign ministers of all three European governments said in the statement that they “expect the Saudi Government to provide a complete and detailed response” and that “we have conveyed this message directly to the Saudi authorities.”

In Washington, lawmakers of both parties had already demanded some sanctions if Saudi Arabia is proved responsible for Mr. Khashoggi’s death, and on Sunday, more added their voices.

“If this is proven to be true, there is going to be a response from Congress,” Senator Marco Rubio, a Florida Republican, said Sunday in an interview on “Meet the Press” on NBC. “It’s going to be nearly unanimous. It’s going to be swift. And it’s going to go pretty far.”

“Our moral credibility,” Mr. Rubio said, “is undermined and compromised if we somehow decide that because an ally who is important did that, we’re not going to call it out.”

The threats of retaliation from the West sent the Saudi stock market plunging as much as 7 percent on Sunday, the first day of the business week in the kingdom.

The Saudi statement criticizing Mr. Trump did not repeat the previous assertions of the crown prince and others that Mr. Khashoggi had left the consulate freely. But the statement also offered no further information about his disappearance.

On Friday, a Saudi delegation led by Prince Khaled bin Faisal visited Ankara to meet with Mr. Erdogan. Prince Khaled, 78, is a senior member of the family, the governor of Mecca, and an adviser to King Salman, so his role in the mission underscored the seriousness of the crisis in the eyes of the king.

But Prince Khaled’s delegation left Ankara after a few hours without making any statement. Then late Sunday night, King Salman himself called Mr. Erdogan. A semiofficial Turkish news agency said they had discussed the importance of a joint investigation.

Mr. Trump has embraced Saudi Arabia as his administration’s pre-eminent Arab ally. He made Riyadh the destination of his first foreign trip as president, and his White House has been especially supportive of the 33-year old crown prince. Mr. Trump repeatedly expressed his confidence in the young prince even while he was still challenging older family members for dominance of the royal court.

And the president’s adviser and son-in-law, Jared Kushner, has reportedly formed an especially close partnership with Prince Mohammed, who holds most of the power inside the kingdom and acts as day-to-day ruler on behalf of his elderly father.

The Saudi statement on Sunday was the first sign of tension between the president and the crown prince.

Until now, Prince Mohammed has had nothing but high praise for Mr. Trump, even after potentially awkward statements like his campaign pledge to ban Muslims from entering the United States or his more recent demands that Saudi Arabia pay more for its own defense.

“You might not be there for two weeks without us,” Mr. Trump recently said he had told King Salman.

Mr. Trump’s statements about Mr. Khashoggi, however, may have touched a nerve.

On Sunday, in an interview with CBS News, he appeared to treat the allegations about the missing dissident with new seriousness. “There’s something really terrible and disgusting about that, if that was the case, so we’re going to have to see,” Mr. Trump said. “We’re going to get to the bottom of it, and there will be severe punishment.”

“As of this moment, they deny it and they deny it vehemently,” he later said, adding, “Could it be them? Yes.”

Mr. Trump, though, repeated his opposition to any suggestion that the United States curtail its weapons sales to Saudi Arabia, one of the biggest arms buyers in the world. If the United States cut off the lucrative arms sales, “we would be punishing ourselves,” he Trump said.

A version of this article appears in print on
, on Page
A
9
of the New York edition
with the headline:
U.S. and Saudis Exchange Threats Over Dissident Who Disappeared
. Order Reprints | Today’s Paper | Subscribe