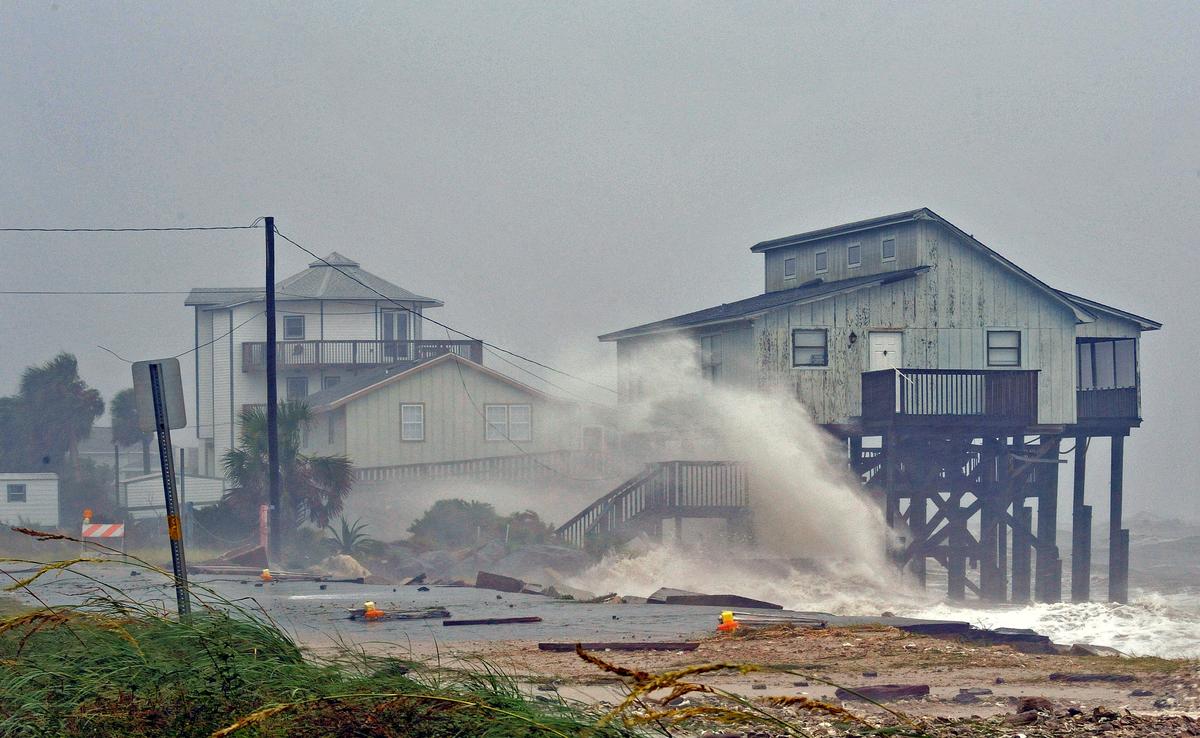 PANAMA CITY, Fla. (Reuters) – Florida’s Panhandle took stock on Thursday of the hammering destruction wrought by Hurricane Michael, with homes obliterated or reduced to rubble and power lines and trees ripped up by the third most powerful storm ever to strike the U.S. mainland.

Michael, now weakened to a tropical storm as it doused Georgia and the Carolinas with drenching rain, crashed ashore on Wednesday near the small town of Mexico Beach carrying winds of up to 155 miles per hour (250 kilometers per hour) and causing deep seawater flooding. The storm killed two people.

In Mexico Beach, CNN aerial footage showed homes closest to the beach had lost all but their foundations. A few blocks inland, about half the homes were reduced to piles of wood and siding and those still standing suffered heavy damage.

Brock Long, head of the Federal Emergency Management Agency, called the town, which has a population of about 1,200, “ground zero” for the hurricane damage.

One objective was to help people who could be trapped in various areas along the coast, he told a news conference. This part of northwest Florida is known for its small beach towns and wildlife reserves.

In Panama City, 20 miles (32 km) northwest of Mexico Beach, buildings were crushed and boats were scattered around. Michael left a trail of utility wires on roads, flattened tall pine trees and knocked a steeple from a church.

Al Hancock, 45, who works on a tour boat, survived in Panama City with his wife and dog.

“The roof fell in but we lived through it,” he said.

Florida Governor Rick Scott told the Weather Channel the damage from Panama City down to Mexico Beach was “way worse than anybody ever anticipated.”

John Billiot, president of America’s Cajun Navy, a group of volunteers who bring boats and vehicles to help during disasters, said Michael was unprecedented.

“We’ve been doing this since 2005,” he told CNN while working on rescues around Panama City. “I have never been scared of a storm a day in my life. This one right here put the fear of God into me. It gives me goosebumps talking about it.”

The two people killed in the storm were a man who died when a tree toppled onto his house in Florida and a girl who died when debris fell into a home in Georgia, officials and local media said.

Long said several hospitals in the Panhandle were hit by the hurricane and patients had to be evacuated.

More than 830,000 homes and businesses were without power in Florida, Alabama and Georgia early Thursday.

Michael was a Category 4 storm on the five-step Saffir-Simpson hurricane intensity scale, just shy of a rare Category 5, when it came ashore. It weakened steadily as it traveled inland and was downgraded overnight to a tropical storm.

Parts of North Carolina and Virginia could get as much as 9 inches (23 cm) of rain and life-threatening flash floods, the NHC said. The Carolinas are still recovering from Hurricane Florence last month.

Waves crash on stilt houses along the shore due to Hurricane Michael at Alligator Point in Franklin County, Florida, U.S., October 10, 2018. REUTERS/Steve Nesius

South Carolina set up 11 emergency shelters in anticipation of floods and tornadoes from Michael.

The hurricane, the fiercest to hit Florida in 80 years, pummeled communities across the Panhandle and turned streets into roof-high waterways.

Thousands of people hunkered down in shelters overnight after fleeing their homes ahead of the storm.

An estimated 6,000 people evacuated to emergency shelters, mostly in Florida, and that number was expected to swell to 20,000 across five states by week’s end, said Brad Kieserman of the American Red Cross.

“There are so many downed power lines and trees that it’s almost impossible to get through the city,” Apalachicola Mayor Van Johnson said.

Michael had rapidly strengthened as it churned north over the Gulf of Mexico in recent days, growing from a tropical storm into a Category 4 hurricane in about 40 hours and catching many by surprise.

With a low barometric pressure recorded at 919 millibars, the measure of a hurricane’s force, it ranked as the third strongest storm on record to make landfall in the continental United States. Only Hurricane Camille on the Mississippi Gulf Coast in 1969 and the so-called Labor Day hurricane of 1935 in the Florida Keys were more intense.

As it churned north this week, the hurricane disrupted energy operations in the U.S. Gulf of Mexico, cutting crude oil production by more than 40 percent and natural gas output by nearly one-third as offshore platforms were evacuated before the storm hit.

On Thursday, oil producers were checking production platforms and beginning to return crews to more than 90 offshore facilities that had been evacuated.