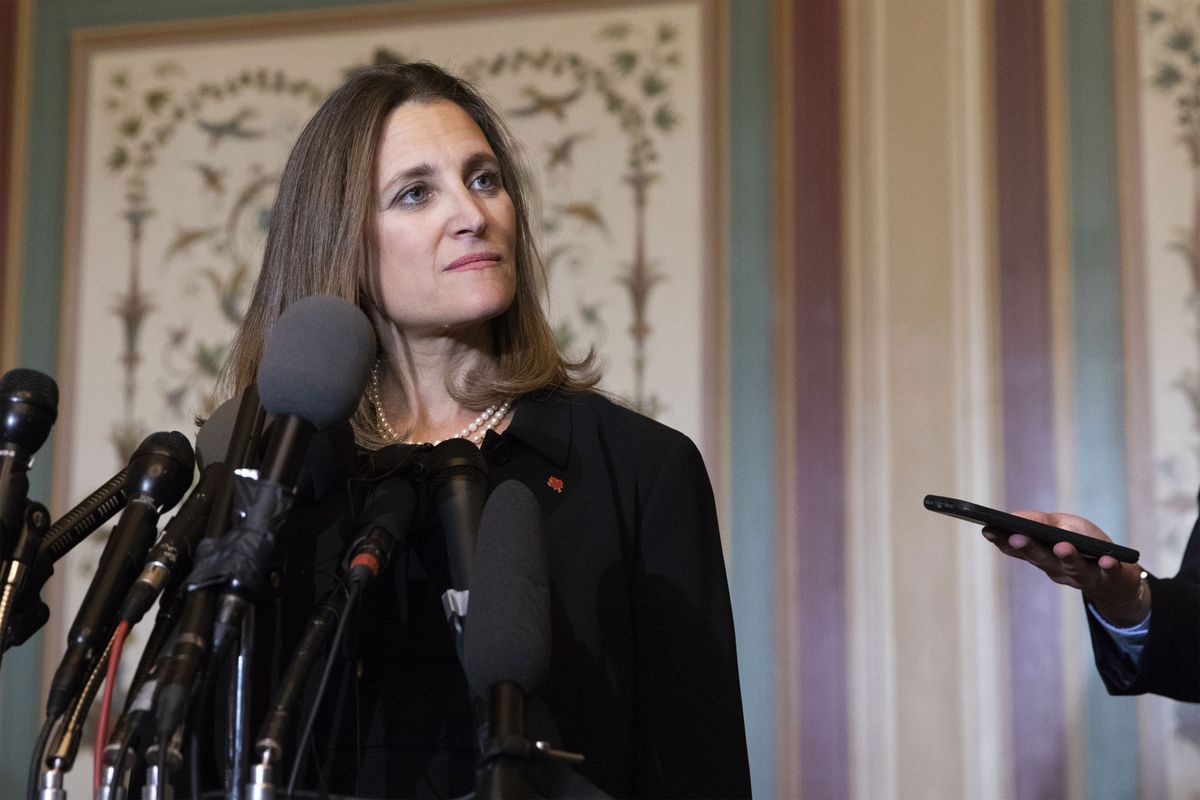 Canada’s top diplomat has a message for the U.S.: the West isn’t infallible, and everyone needs friends.

Foreign Minister Chrystia Freeland delivered a keynote speech Wednesday in Washington amid fraught trade talks and after a
volley of criticism by President Donald Trump and top aides toward Canada’s Justin Trudeau. Freeland ignored those and hardly mentioned trade.

Instead, the minister tasked with taming the Trump administration acknowledged a brewing skepticism while imploring the U.S. not to abandon
the global order that America did so much to build. It wasn’t all sunshine: she warned that the West’s relative power will inevitably decline amid a rise of China and other powers, and the U.S. will be less able to go it alone.

“You may feel today that your size allows you to go mano-a-mano with your traditional adversaries and be guaranteed to win. But if history tells us one thing, it is that no one nation’s pre-eminence is eternal,” Freeland said, according to remarks prepared for an event where she received a Diplomat of the Year award from Foreign Policy Magazine.

“Allow me, as your friend, to make the case that America’s security, amid the inexorable rise of the rest, lies in doubling down on a renewed rules-based international order. It lies in working alongside traditional allies.”

It’s a message that is, of course, at odds with Trump’s “America First” vision, which has upended multilateral systems. “International multilateral organizations are not going to determine American policy, I think the president’s made that very clear,” White House Economic Adviser Larry Kudlow said
earlier this month.

In her speech, Freeland made little mention of ongoing North American Free Trade Agreement
talks — “fortunately, I have the Nafta talks to keep me humble,” she joked after receiving the award. Earlier in the day, she’d urged the Trump administration to continue to try to reach a three-way deal, rather than starting two-way talks with both Canada and Mexico.

She told reporters after the speech that a deal was still possible. “We are all still very much in touch, very much talking, very committed to moving forward,” she said. “I feel at the end of the day that the realities of the Canada-U.S. economic relationship are going to prevail. And the reality is it’s a mutually beneficial, very balanced relationship.”

Trump Wanted a Trade War. Here’s What One Looks Like: QuickTake

In the speech, she warned against U.S. steel and aluminum tariffs, saying the decision to impose them on Canada — a military ally and the top source of U.S. imports of both steel and aluminum — on the grounds of national security was “hurtful.” She gave the same message
to senators earlier in the day.

“No one will benefit from this beggar-thy-neighbor dispute,” Freeland said. “The price will be paid, in part, by American consumers and by American businesses.”

Freeland warned of a series of risks facing the U.S., Canada and other like-minded allies. She dismissed the “seductive argument” that the collapse of the Soviet Union meant liberalism had won out over authoritarianism once and for all. Instead, the world is seeing countries like Venezuela and Russia retreat from liberalism, democracy and capitalism, she said.

China, despite successes, “stands as a rebuke to our belief in the inevitability of liberal democracy,” she said. Liberal democracy is “under assault” as regimes are “actively seeking to undermine us with sophisticated, well-financed propaganda and espionage operations.”

She thanked the U.S. “For the past 70 years and more, America has been the leader of the free world,” she said. Canada understands that “many Americans today are no longer certain that the rules-based international order – of which you were the principal architect and for which you wrote the biggest checks – still benefits America.”

And at home, she warned that neo-Nazis, anti-globalists and “incels” threaten to upend things from within – the latter is a reference to
a van attack in the city where she lives, Toronto. Populist anti-establishment sentiment takes hold when the middle class is hollowed out, she said. She made no mention of any particular politician.

People “believe their children have fewer opportunities than they themselves had in their youth,” she said. “That’s when people are vulnerable to the demagogue who scapegoats the outsider, the other – whether it’s immigrants at home or foreign actors.” She didn’t identify any demagogues.

The world should fight that by beefing up trade deals to introduce labor standards, update the World Trade Organization and tear down non-tariff barriers to trade, Freeland said. Domestic policy needs to support jobs of the future, while supporting education, healthcare and retirement, she added.

She closed by quoting Ronald Reagan, who dreamed of “a tall, proud city built on rocks stronger than oceans,” open to commerce and people. Canada is trying to defend that vision of the international order, she said. “Our friends among the world’s democracies – in Europe, in Asia, in Africa, and here in the Americas – are shoulder to shoulder with us. We all know we will be strongest with America in our ranks.”