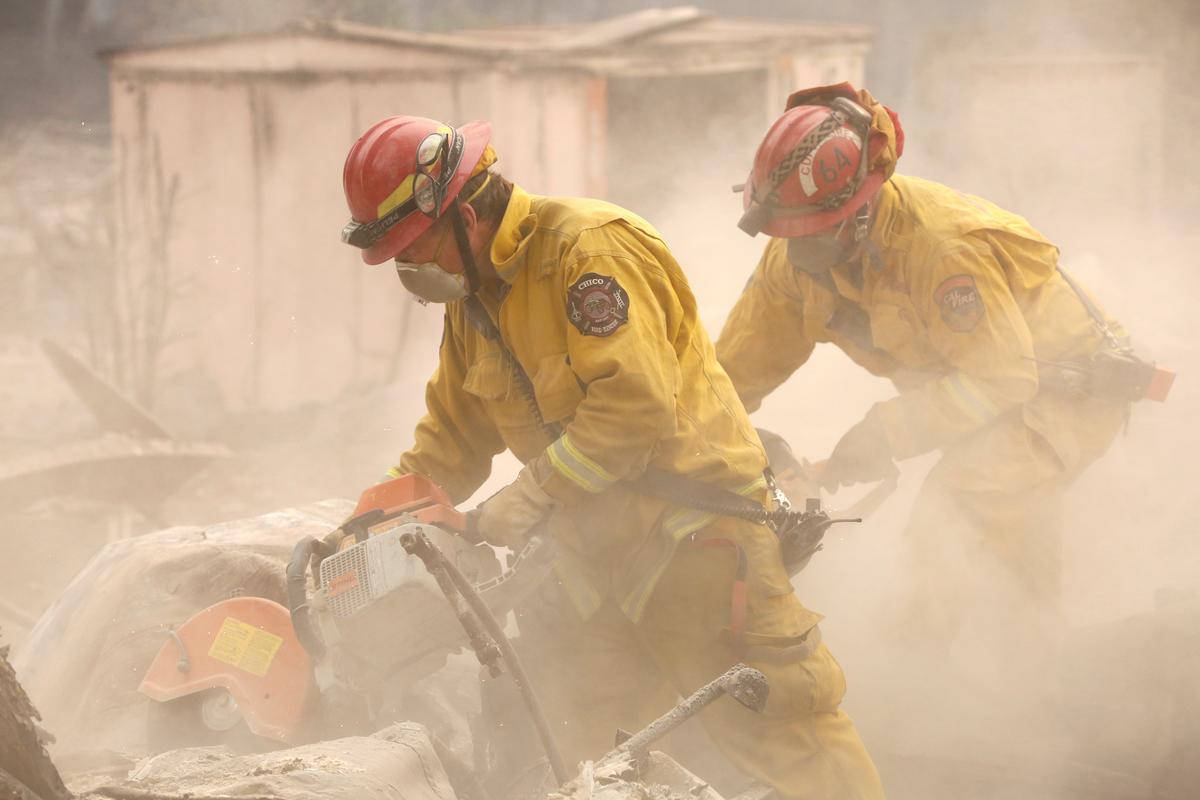 The confirmed death toll from the Camp Fire stood at 48 as the footprint of the blaze grew by 5,000 acres to 135,000 acres (55,000 hectares), even as diminished winds and rising humidity allowed firefighters to carve containment lines around more than a third of the perimeter.

“Progress is being made,” said Ken Pimlott, director of the California Department of Forestry and Fire Protection (Cal Fire) at a news conference flanked by Governor Jerry Brown, U.S. Interior Secretary Ryan Zinke and other officials.

Late on Wednesday, the Butte County Sheriff’s Office released a list here of 103 people reported missing by relatives, the majority of them over the age of 65. Initially 230 people were reported missing.

Most are from Paradise, California, a town in the Sierra foothills, about 175 miles (280 km) north of San Francisco, that was largely incinerated last Thursday.

More than 8,800 buildings, most of them houses, burned to the ground in and around Paradise, a hamlet once home to 27,000 people. An estimated 50,000 people remained under evacuation orders.

“This is one of the worst disasters I’ve seen in my career, hands down,” Brock Long, head of the Federal Emergency Management Agency, told reporters in the nearby city of Chico.

After touring some of California’s earlier wildfire zones in August, Zinke blamed “gross mismanagement of forests” because of timber harvest restrictions that he said were supported by “environmental terrorist groups.”

But pressed by reporters on Wednesday, Zinke demurred. “Now is really not the time to point fingers,” he said. “It is a time for America to stand together.”

But lawyers for some of the victims are pointing to lax maintenance by an electric utility as the proximate cause of the fire, which officially remains under investigation.

The Butte County disaster coincided with a flurry of blazes in Southern California, most notably the Woolsey Fire, which has killed at least two people, destroyed more than 400 structures and displaced about 200,000 people in the mountains and foothills near the Malibu coast west of Los Angeles.

On Wednesday, the Los Angeles County Sheriff’s Department said the remains of a possible third victim were found in a burned-out dwelling.

In northern California, 100 National Guard troops trained to seek and identify human remains are joining dozens of coroner-led recovery teams, cadaver dogs and forensic anthropologists already sifting through the charred, ash-strewn rubble of what was left in Paradise, a spokeswoman for the Butte County Sheriff’s office said.

Cal Fire investigator Stewart Morrow was assessing property losses in Paradise, comparing piles of scorched rubble where houses once stood with online photos of the structures before the fire. He also was keeping an eye out for human remains.

“I’ve been a firefighter for 20 years and I’ve never seen a place so destroyed,” Morrow told Reuters on Wednesday.

A group of three law firms representing multiple victims of the Camp Fire has filed a lawsuit against Pacific Gas & Electric (PCG.N) alleging PG&E failed to properly maintain and replace its equipment and that “its inexcusable behavior” contributed to the cause of the Camp Fire.

The lawsuit alleges that prior to the Camp Fire, PG&E began warning customers it might turn off power because of the elevated risk of wildfires from high winds but never did so.

“It’s important to remember that the cause (of the “Camp Fire”) has yet to be determined,” PG&E said in a statement.

Wind-driven flames roared through Paradise so swiftly that residents were forced to flee for their lives.

Anna Dise, a resident of Butte Creek Canyon west of Paradise, told KRCR TV her father, Gordon Dise, 66, died when he ran back inside to gather belongings and their house collapsed on him.

Dise said she could not flee in her car because the tires had melted. To survive, she hid overnight in a neighbor’s pond with her dogs.

“It was so fast,” Dise recounted of the fire. “I didn’t expect it to move so fast.”

The fatality count of 48 from the Camp Fire far exceeds the previous record for the greatest loss of life from a single wildfire in California history – 29 people killed by the Griffith Park fire in Los Angeles in 1933.