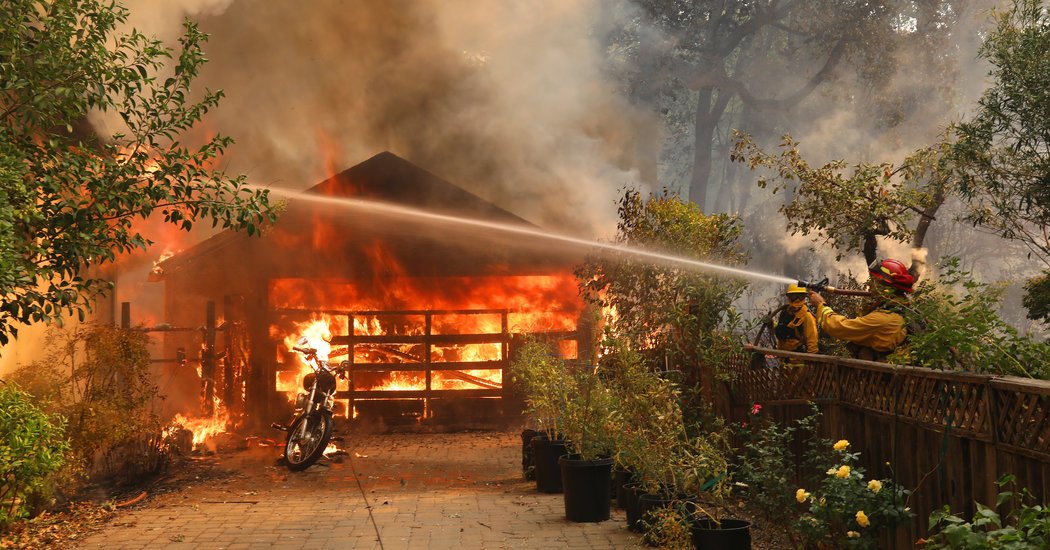 “This is really serious. It’s moving fast. The heat, the lack of humidity and the winds are all driving a very dangerous situation and making it worse,” the governor said at a morning news conference. “It’s not under control by any means. But we’re on it in the best way we know how.”

Hospitals in Napa and Sonoma Counties reported scores of patients with fire-related ailments. St. Joseph Health said it had treated about 170 people at three of its hospitals in the region — most of them for smoke inhalation, but some for burns. Santa Rosa Memorial Hospital and Petaluma Valley Hospital postponed all elective procedures to free up resources for emergency care.

The fires began at about 10 p.m. Sunday and were fanned by wind gusts of more than 50 miles an hour, Ms. Upton said. The causes remained under investigation on Monday afternoon.

The worst fires in Northern California tend to hit in October, when dry conditions prime them to spread fast and far as heavy winds, known as north winds or diablo winds, buffet the region.

Ms. Upton said that conditions were critically dry, given the lack of moisture in the air and the buildup of grass, brush and trees.

“Combined, that’s a recipe for disaster,” she said.

Smoke billowed into the Bay Area, but the Marin County Fire Department reported that there were no separate fires there.

Reports suggested that residents had been caught unaware, many of them fleeing in cars and on foot as firefighters rushed to contain the outbreak. A number of roadways, including highways, were blocked by fire.

Parts of Santa Rosa were evacuated, according to the city manager, who said the Kaiser Permanente and Sutter hospitals were being cleared out. Marc Brown, a spokesman for Kaiser Permanente, said about 130 patients had been evacuated from the Santa Rosa medical center because of the fires.

But St. Joseph Health, another hospital system in the area, said in a statement Monday evening that its facilities were still open.

Flying cinders carried the fire across roads and ignited small patches through neighborhoods: A pile of wood chips in the Home Depot parking lot caught fire. Traffic lights at multiple intersections were not functioning, and columns of black smoke could be seen in the evergreen forests on the northern outskirts of the city.

The fires raged through the hills that are home to some of the country’s most prized vineyards. The main north-south highway that connects San Francisco to the northernmost parts of California was closed Monday as fire engulfed both sides of the freeway. Santa Rosa is a hub for tours into wine country, and at least two large hotels that cater to the wine tourism trade were destroyed by the fires.

North of Santa Rosa’s downtown, residents of the Overlook, a hilltop apartment complex, used fire extinguishers to put out flames engulfing cypress trees planted along a building. Minutes later, the flames returned. At least three engines and ladder trucks arrived but could not stop flames on one of the buildings from spreading to the roof.

“It looks like they’re giving up on that one,” said Derek Smith, a Santa Rosa resident watching the blaze whose house was several blocks away.

Belia Ramos, the chairwoman of the Napa County board of supervisors, said the county was dealing with three main fires. One has threatened more than 10,000 acres in northern Napa County, another has endangered 8,000 to 12,000 acres, and a third has affected about 2,000 acres, she said.

California was hit by fires throughout the summer. Late last month, several blazes led to the evacuation of about 1,000 people in Southern California. And on Monday, a brush fire in Anaheim burned at least seven homes.

“I’ve been with the department for 31 years, and some years are notorious,” Ms. Upton said, adding, “I’m afraid that 2017 is going to be added to that list now.”

Even into the early afternoon — many hours after the homes were destroyed in the Journey’s End retirement community in Santa Rosa — flames shot from a large propane tank with a roar that resembled an aircraft engine.

Richard Snyder and Robert Sparks, both residents of the retirement community, said their neighboring trailers had been incinerated. They lost televisions, books, laptops — and copies of the insurance policies they had taken out.

“This is all I have,” Mr. Snyder said, pointing to his jeans and turquoise T-shirt. “And one pair of glasses.”

The fire was so intense, it burned through the metal and glass trailers and safes that had been advertised as fireproof.

Ofelia Razo, one of about a dozen residents whose houses were spared, fled with her purse in a pre-dawn evacuation with dozens of other residents. Her husband, Milton, took only his guitar.

When they returned about 10 hours later, Ms. Razo saw the smoking rubble in the distance and broke down.

But as she came closer, she saw that the fire had stopped at her wooden lattice fence. Her powder blue trailer was, bizarrely, untouched. Even the plastic flowers in a ceramic pumpkin vase on the porch were intact. Her red rose bushes were only lightly singed.